An Introduction to Wind Instruments 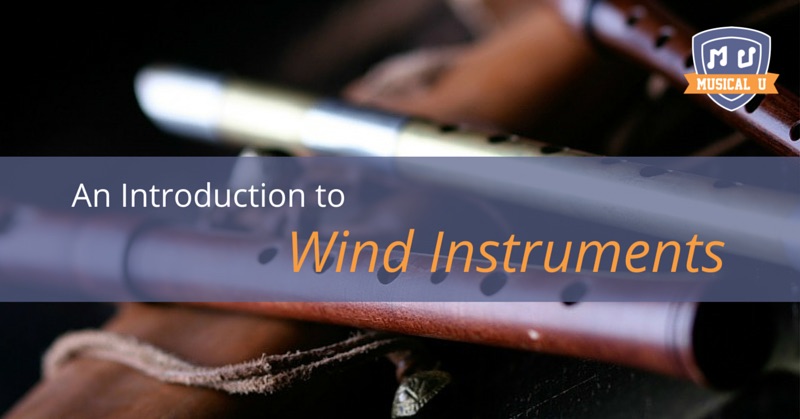 Just like in human families, musical instruments that are related to each other belong to a particular family. While some members of the family are larger and some are smaller, these instruments share similar shapes; are often made of the same types of materials; and produce sound in comparable ways.

Have you ever wondered how the simple act of blowing wind through a hollow instrument such as a trumpet, clarinet, flute or saxophone can create a sophisticated sound and serve as inspiration for the creation of complex, meaningful music? In this post, we’ll take a closer look at wind instruments and what makes them so special.

A Brief History of Wind Instruments

A wind instrument contains some type of resonator in which a “standing wave” of air is created inside it by the player blowing into a mouthpiece located at the end of the resonator.

The origin of wind instruments dates back to over twenty thousand years ago when primitive man noticed that a hollow piece of wood or fruit shell could produce a pleasant sound if blown into in a specific way. It’s no surprise that this quickly became seen as a magical act through which mankind could get in touch with nature and communicate with the spirit world.

Wood was one of the most accessible resources to the first civilizations. In fact, Ancient Egyptians developed some of the most advanced wind instruments of the time for use in everyday life and religious rituals. These early Egyptians focused on improving techniques for flutes, trumpets, and the precursors of the clarinet.

On the other hand, Ancient Greece associated wind instruments with the gods and used them both in theatrical tragedies and for celebrations. For instance, the aulos or tibia were identified with the god of sun, Apollo, or the god of wine, Dionysus. Perhaps their most notable innovation was the pan flute (or syrinx), which was made by tying together several reeds of different lengths. When blowing into the reeds alternatively, various pitches are created. Pan flutes were also very common among Native Americans.

As the name suggests, the instruments in this family were traditionally made entirely of wood. Nowadays, they can also be made of metal, plastic, or some other combination. Due to the way air is blown into them, these woodwind instruments are generally easier to play. This makes them quite suitable for beginning musicians.

Two major types of woodwind instruments are flutes and reeds.

Flutes maintain the basic design of early woodwind instruments. They consist of only a length of hollow material and a way of moving air inside. The sound is created by blowing air across the edge of a mouthpiece. Since flutes often create a higher sound, they were extremely popular during the Baroque period.

Brass instruments such as trumpets, French horns, trombones, and tubas are made entirely of brass and are usually more difficult to master. They are essentially very long pipes that widen at the end into a bell-like shape. When playing brass instruments, the player’s lips vibrate, causing the air within the instrument to vibrate. By pressing different valves and buzzing your lips harder or softer, you can change the pitch and create a unique, beautiful sound.

We hope this has given you a glimpse of wind instruments and their place in music. Today’s instruments are excellent reflections of their historical predecessors. Modern innovation has brought them a long way, but the roots serve to remind us of how timeless music truly is.

Have you experimented with a wind instrument? Considering trying one out?