Make no mistake: Wii Music is a lot of fun. Where else can you get together with your friends and play “Sukiyaki” on steel drums and sitar, or create a full orchestral jam session in space? Wii Music offers so many nuances of play that small children can play with no chance of failure, yet it can be adapted to create highly competitive opportunities for musicians to play.

What is Wii Music?

Performing with friends in Wii Music

Essentially, players of Wii Music play music as Wii characters. Using the Wii remote controls, you choose instruments to play, using movements rather like those required in playing the musical instruments in the physical world. Each instrument has its own nature in Wii Music, just like in the real world, and particular combinations of buttons and movements give you chords or single notes, tremolo or arpeggios, crescendos or muted sounds. Add the Wii balance board for full drum set action.

As you continue to play, you unlock more instruments and more tunes, working up to a selection of over 60 different instruments from around the world (and some special things like the barking dog suit and martial arts yelps).  There are 50 pieces of music once you’ve unlocked them all, ranging from Bizet to Wham! to video game  theme songs. You can play with friends, and Wii will give you other band members to play with. You can change the venue of your concert, make music videos to play back, and control the sound in a variety of ways. You can choose different genres for different tunes, pioneering “Ode to Joy” with a Hawaiian sound or playing “Wait a Minute, Mr. Postman” in classical style. You can lay down multiple tracks and put them together into a masterpiece.

Wii Music is designed with a variety of training features to help players improve at playing the game. There are tutorials, pop-up reminders about how to hold instruments, and  options like a metronome and “sheet music” to guide you in playing. In addition, Wii Music contains mini-games that offer an opportunity for ear training. 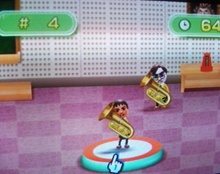 Which is playing the higher note?

Wii Music includes a game called “Pitch Perfect” that lets players work, in fast-paced rounds of random play, on pitch recognition and matching. The game randomly chooses among the players, so players must stay attentive. A question or challenge is presented on the screen, such as “Which Mii is playing the highest note?” Players then watch and listen to Wii avatars playing notes, and move the correct Miis onto stages.
There are eight levels of play, and within each game, the level of difficulty of the challenges increases as you play.

So, at Level I, you might first be asked simply to recognize whether or not two Wii musicians are playing the same note. Later, you’ll be asked to place the Miis in order from low to high pitch. At first, all the musicians play the same instrument, and there may be only two or three Miis in the puzzle. 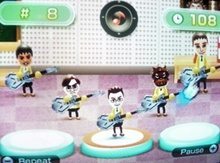 Choose notes to reproduce the chord

As you continue to play the more challenging levels, you will be asked to determine whether pitches match – but you may be comparing a sax, a bagpipe, and a snare drum. You’ll be offered complex chords with four notes instead of a simple major chord. There may be half a dozen Miis playing, and you’ll have to choose the one making a sour note.

Since there’s a time limit for each challenge, there’s a bit of pressure to up the excitement. Players  have the choice of working alone, striving against their own previous records, or playing competitively.

Here are some of the challenges you might encounter in Pitch Perfect:

There are two other mini-games that focus on tempo and interpretation. Handbell Harmony is reminiscent of Guitar Hero; players vie against each other to play their notes at the right moment with color-coded bells.  Unlike Guitar Hero, you’ll have a couple of specific notes to play, and you must play the right note at the right time. While this game can be played just with quick reflexes and a good eye, being able to hear when your own note is coming up definitely helps. What’s more, repeated practice will help players hear their own notes.

Wii Maestro is a conducting game. Players conduct an orchestra of Miis, either individually or jointly with another player – in which case you get a score for “chemistry” that shows how well you’ve collaborated with your partner, a worthwhile skill for musicians.  Players can play competitively, since each attempt receives a numerical score. However, it’s also fun to see the antics of your orchestra – the Miis smile, jump, pout, sweat, and even cry (artistic temperament, I guess).

Individuals of any age working through the progressive levels of play in the mini-games can expect to improve their ability to hear the pitches and rhythms.

A Game of Musicianship

These are the mini skills games, but the main game, if you look past the fancy stuff, is still a game of musicianship. It’s possible to play the game with a non-musical focus – form a group with cat suit and bagpipe and jam on the beach just to be silly.  But the fact remains that you have quite a bit of control over the piece of music you’re playing.  Players can add grace notes, change the phrasing, and rearrange the melodies — or miss their entrances and create discord.

Unlike many music-oriented video games, Wii Music sounds better when the players play well. There’s satisfaction in practicing and perfecting your performance.  The light-hearted look makes it a great game for kids, but anyone looking to improve his or her musical ear can benefit from this game. For an organized approach to ear training, in the classroom or studio, work through Pitch Perfect in order, mixing it up with the more physical games of Wii Maestro and Handbell Harmony to keep it fun and fresh.  Then explore the surprisingly sophisticated options in the main game – you may be surprised how readily your new skills transfer to real-world musicianship, even if you aren’t playing in a dog suit on a giant birthday cake!

Rebecca Haden has been a web content writer for a decade, and a teacher longer than that. Her degrees are in Linguistics, but she considers music just as important.

Have you used Wii Music for ear training? Played the “Pitch Perfect” mini-game at all? Let us know in the comments!