Sometimes, as we become more familiar with music theory, we start taking the fundamentals for granted. After all, a step is a step, right? In order to really develop your ear, though, it can be surprisingly helpful to look at the basic functions of an interval with fresh eyes.

As you read this article, it might seem at first like my interval recognition tip is just picky semantics, but I’ve seen this subtle shift in thought help the ear training process “click” for dozens of people. And it really is just a simple shift: rather than practicing an interval by focusing on the jump from one note to another, think in terms of the distance between the two notes.

Your first instinct may be a roll of the eyes! That is, after all, the basic definition of an “interval.” But it’s one thing to know it intellectually – and another entirely to be mindful of it while practicing, and it’s the latter point that really affects the progress you’ll make with ear training. 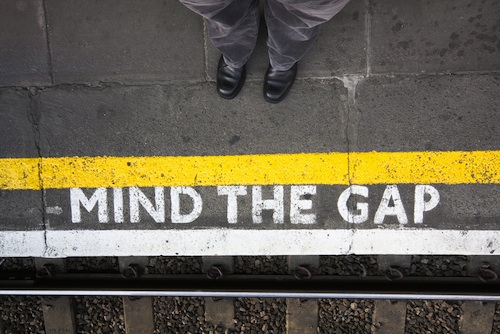 Remember, for instance, a time in which you’ve found yourself trying over and over to nail a tough interval leap in a melody. You’re consistently a half step off, so you try playing it on an instrument, try it again, still off, all the while becoming more frustrated and thus less accurate.

It’s in this moment that we forget the basics like “What is an interval?”. We forget that an interval expresses the distance between the notes, and instead try to bludgeon the independent tones far enough into our skulls that we won’t forget them when they pop up in context! While this can be somewhat effective temporarily, in the end it’s far less than ideal for a couple of reasons.

Keep your eye on the prize

The first reason is fairly obvious. If you’re having trouble with an interval in a specific melody, you might still be able to memorize the line and overcome the issue through sheer willpower and repetitive practice. But that’s a classic case of winning the battle and not the war! What happens when the interval comes up next time?

In my own experience, as well as my observations of students and fellow musicians, we all have a few intervals that are tricky for us to hear accurately, and these same few ‘problem areas’ manifest themselves in diverse mistakes across various songs. So if you bang your head against the wall every time you hit, say, a perfect fourth in a song, and you run it through time after time until you get it down, have you solved the problem? You may well have perfected this melody, but you’re still leaving yourself prone to the same gruelling process for other melodies in the foreseeable future!

Instead, when you hit that interval you just can’t get, stop and focus on it immediately. Explore what you can and can’t do, and experiment with different interval recognition techniques.

Listen carefully for the distance between the notes. Are you moving up or down in the scale to reach the second pitch? And how far?

Let’s say, for example, you’re having an issue properly singing a descending major seventh. Can you sing it ascending, or do you have trouble with it both ways? If the former, try alternating a pattern of ascending/descending major sevenths until you reflexively know how far to ‘jump’. If you can’t hit it in either direction, work on one direction and then the other, moving through different keys (starting notes) until you can feel the distance of a major seventh independent of what the particular two notes separated by that interval are. You can learn more about identifying big intervals here.

Ignore the individual tones and try to listen between them. If you stay dedicated until you can hear the interval immediately—which, of course, will still take time—not only will you have fixed the problem, but you’ll very likely find that the major seventh is now one of your stronger interval recognitions.

Little notes, all the same 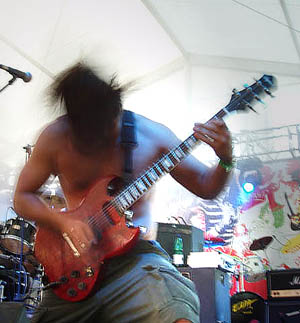 The second impact of this changed perspective on intervals is less direct and immediate, but just as important. If you try to consider a melody as being defined not just by its specific notes but by the intervals between them, you’ll start to see your own melodies become more concise and catchy.

I’ll explain that a bit more: A common danger in modern music—especially for guitar players like myself—is the temptation to pack a melody or solo with a ton of notes, because somewhere along the line it became an accepted indicator of musical proficiency.

This viewpoint can consume your compositional style, because you’ll get faster at playing/singing them and in so doing convince yourself that you’re improving. If you think in terms of the interval, however, you’ll start to notice how many of these fast runs are separated by a uniform distance (e.g. just step-wise motion between all the notes in the part: running up and down a scale) and so will probably sound considerably boring to anyone who doesn’t themselves aspire to melt faces!

By thinking in terms of intervals you can remove the emphasis from the series of notes, and it will inevitably become easier to create a more balanced and interesting melody or solo.

It might, at first, be difficult to see the point of this interval recognition tip and value the difference between looking at two notes and looking at the space between two notes. But the viewpoint you take when learning intervals and practicing melodies has a major impact! Pay mindful attention to this and your efforts in ear training will immediately become easier and more satisfying.