Summer of Music: On The Road, Part 2 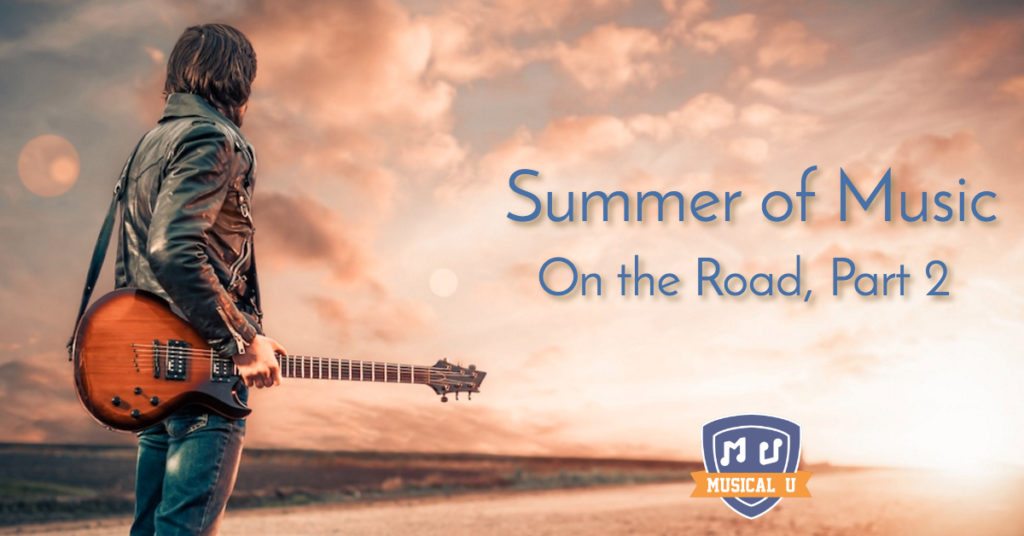 A summer on the road doing what I love: making music. What could be more fun than that? Well, last time we talked about how my intense preparation and professional attitude shaped my experience to keep it fun. With these two in my back pocket, even the less-than-pleasant events on the road with a successful tribute act became opportunities for growth and learning.

The next show was a “double feature”: Disco and 80s. Well, I thought I had a good start on the music as the previous guitarist had sent me his cheat sheets. Here is where early preparation saved the day… again! Before we left, I pulled up the recorded music to play with the cheat sheets and quickly found that much of his music didn’t make any sense with the actual tracks. Going through this early on gave me time to fix it all.

This show also introduced me to the fine art of costumes! Oh boy! I had two costumes for each show. Having the proper clothes helps to build the mood for the audience. This is true of any pro act – and essential for a tribute act where fond nostalgic memories rule: 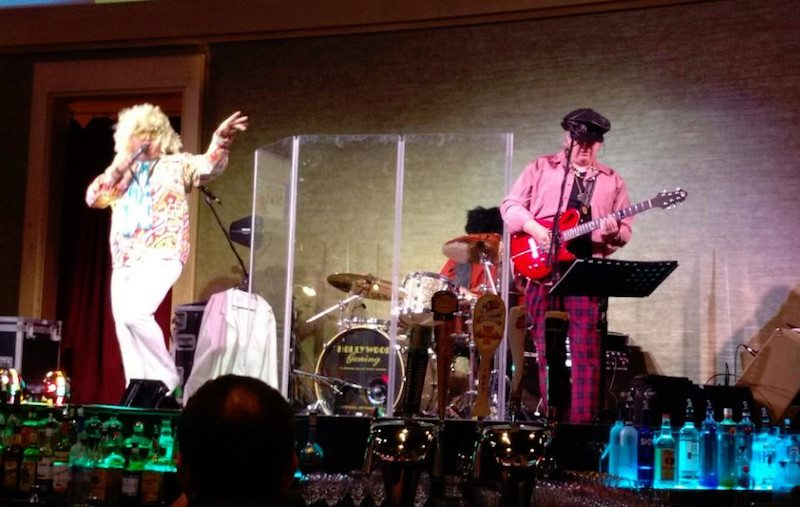 Most of the shows we did were out of town, but we did have one show that was at home.  This was one of my favorite shows last summer as my wife, family, and friends were able to attend. It was the Billy Joel show – one of my more comfortable shows that I really enjoyed.  The music was great and the crowd was excellent: 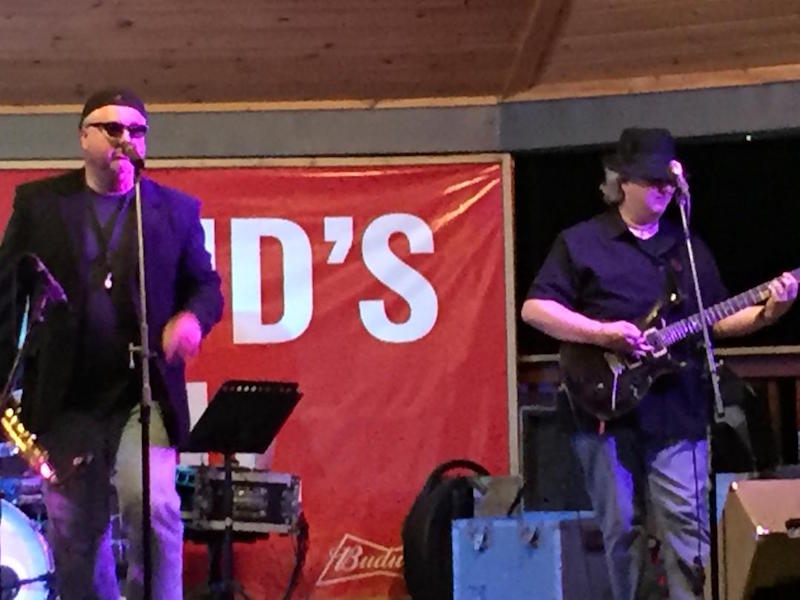 And here is a song from the show:

You May Be Right

Now the teaching moment. Contracts are a biggie when performing and also a good piece of security. The singer had contracts for every show, and he also kept multiple copies of them with him at all times.

Sounds like paranoia? Well, clubs and restaurants are notorious for trying to take advantage of a band. The contract included an agreement to provide meals for the band. But at the end of night, the manager still sent a waitress to collect. My boss simply pulled out the contract to show that meals were included. When music is your income and living, contracts are your protection.

What can be better than an outdoor gig on a warm summer day?  Well, as the days heated up, so did the weather-related issues. There was that one private corporate show between a pool and a corn field…

It was a three-part show: Elton John, Disco and then 80’s. This also meant a lot of wardrobe changes. The night went by pretty quickly. The first set, Elton John, was a blast. The Disco set was going well but bugs started invading the stage.

But the 80s set got real rough. It was about 11 pm: the dew began to coat everything. My guitars were soaked. At this point playing anything but my solid body electric was out of the question. The porous wood of my acoustic, my hollow body, and even the neck of my solid body soaked up the water and the tuning battle began. I had to re-check my tuning every chance I had, keep a towel close by at all times to dry the neck off.

We had a good run of shows in August, driving up and down the East Coast.

On our way through Pennsylvania, we stopped for gas and a stretch. As I was walking back to the van I smelled a familiar smell – which wasn’t a good smell – with an accompanying image: spray coming out of the radiator and fluid all over the ground. Our singer and sound guy went to work. Thanks to some stop-leak, we made it to the next show.

The show was hot (as in literally) – which we were already somewhat ready for as we had to drive the van with no AC to keep the engine from overheating. 90’s Fahrenheit (mid 30’s Celsius). Another outdoor show: the stage was cramped, but the staff and audience were fantastic. 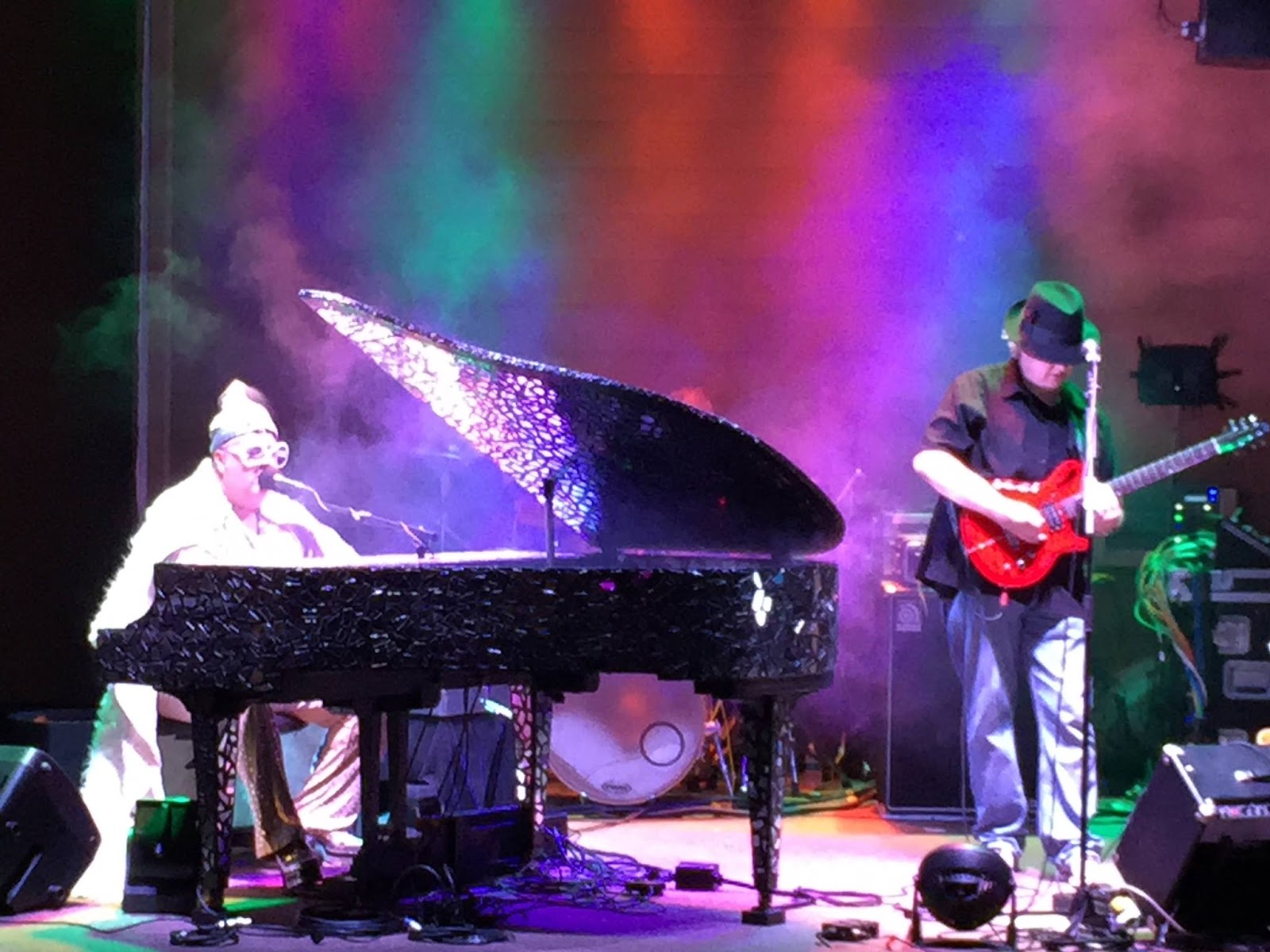 The next morning we were on the road to Ocean City, MD. The van overheated anytime we stopped in traffic – which happens quite a bit in the NJ area. 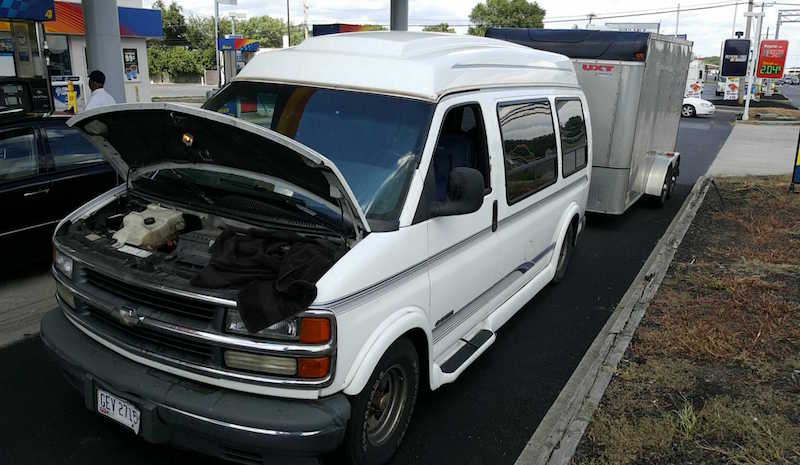 Well wouldn’t you know it: back in that trailer, along with our equipment, spare tires, tools, gas cans and more, my employer had picked up and stashed a spare radiator. He’s big on having backups for everything both in terms of music and transportation. Even so, we didn’t want to take the time to fix in all that hot weather, so we limped along to the next gig.

We made it to Ocean City, MD to play at a really nice restaurant on Fager’s Island. A very cool place overlooking the ocean and near the beach. An inside gig with air conditioning – we were well fed and had nice hotel rooms.

This show – half Billy Joel and half Elton John – was great and very active. By the time we hit the stage, the place was packed and everyone was singing along and loving the show. Everything on stage was flowing and both the crowd and band were rocking: 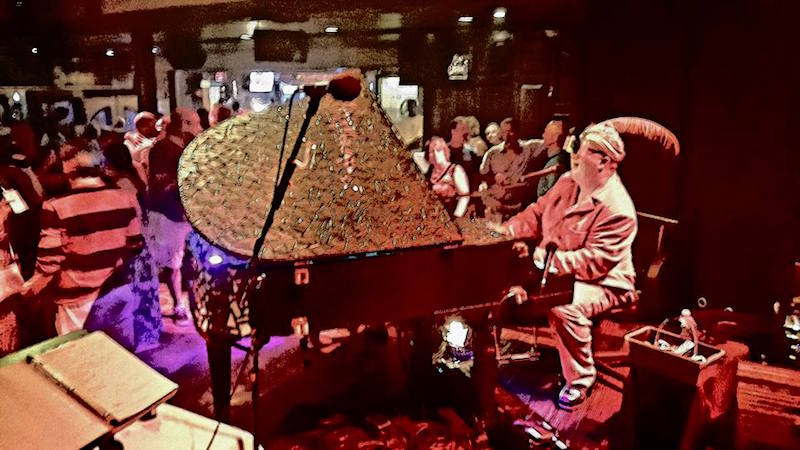 Remember how I mentioned having backups? That evening as the van was being parked the trailer got too close to curb, pinched and blew the tire. Minutes later we had changed the tire and were back to loading the trailer.

Our strategy of driving in the cooler evenings, stop-leak, and no AC was keeping the van going. We made it to Long Island and settled into the hotel.

Next day we had time to relax. A point here: at every hotel, my employer asks up front for a late checkout, which is a beautiful thing when you’ve been up late tearing down and loading up after a show.

After all we had been through with the van and the heat, we ended up hanging out in the air conditioned hotel lobby all day. So here is the picture of life on the road to go with the picture of the broken-down van. Pretty glamorous eh? 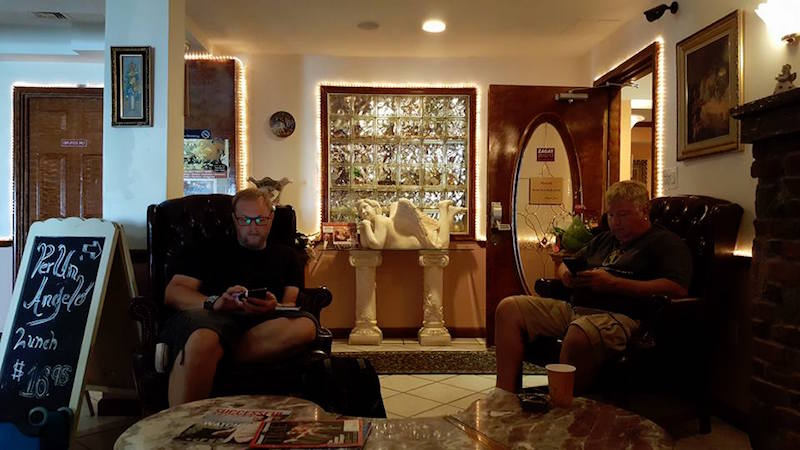 That night we played an outside gig on a large metal tractor trailer that transformed into a full stage. Did I mention it was made out of metal? That is an important thing to remember because we were all watching a storm system coming our way.

The storm clouds appeared to be going around the area so we set up and started the show. This night we were doing our Rascal Flatts tribute show “Broken Road”. We hit the stage and it was rocking: 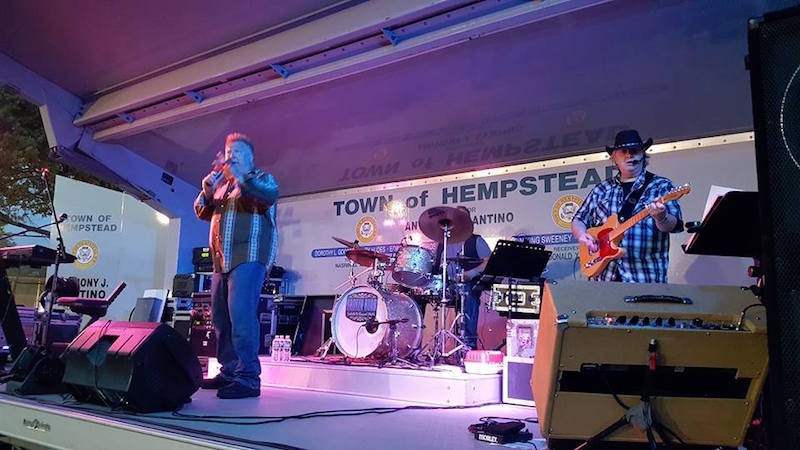 We were almost through the second song when we got waved to shut down. It turns out some lightning hit close by and the organizers decided it was time to take a pause. We immediately shut off all electrical equipment and got off the stage. The organizers wanted a 20 to 30-minute break to see if the clouds would go around. They sent the crowd to their cars for safety’s sake.

A good many did as they were asked, but many stayed to keep their spot. The clouds and lightening were still threatening so soon they canceled the show and we went into a very fast tear-down and load-up to keep the gear from getting rained on.

This brings me back to the importance of contracts, especially for outside gigs. The “Rain Clause” ensures that you will be paid if the weather ends up canceling the show. Even though we didn’t get to do a full show, we had traveled and still did our best.

Everyone there – from the organizers to the work crew to the crowd – was awesome.  A few even showed up at another show we did in New Jersey a week later.

The Art of Faking It

One of the last shows of the season was at a West Virginia casino. One of our bigger shows, on a large stage of a pro theater.

So far we had been performing as a trio with backup tracks, but this contract called for a full band on stage. The singer was unable to get a bassist so asked one of his previous bandmates to play guitar. I was asked to switch to “fake bass”. With all of the bass parts on the backing track, he basically needed someone for stage fill.

Easy money right? Well, it turns out the booking agent would be at the show – and he was a bass player! Fake or not, I had to look convincing. I said yes and then got my head around all the Elton John bass tracks. I kept music on stage to keep my fingers in the right place on the neck.

I have to admit, when I thought about the scrutiny of the booking agent and I saw that big stage, I felt a bit paranoid: 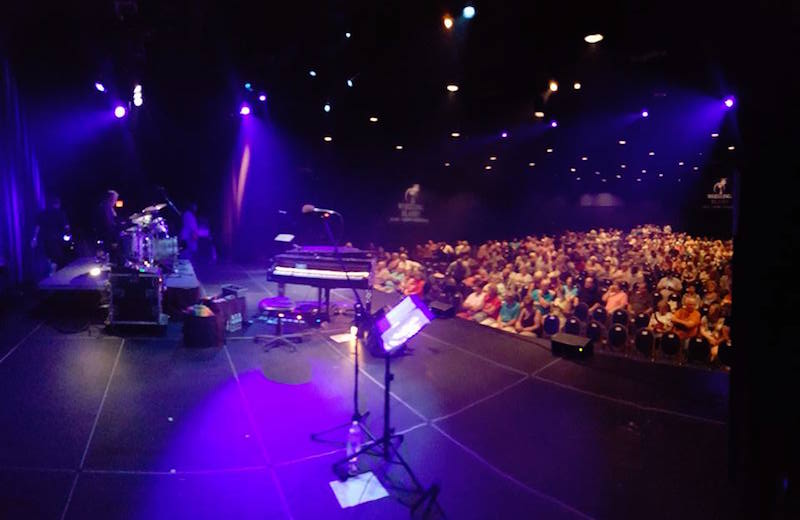 The show was great, though. The crowd was super-responsive and I got to talk to quite a few folks.

Now for the funny part. We’re tearing down and the booking agent comes up to talk to the singer. He sees me and I think, “Here it comes… “

The guy says, “Man! You nailed those bass parts! Most guys can’t do those right but you had them down.”

I just about fell over along with the other guys in the band. We didn’t say a thing until we were in the van coming home  – then we had a good laugh.

Playing music for an income is a great thing and it is a blessing to do something you love and be paid for it. It is also work. You will sweat, you will work hard, you will sleep on the road, get stuck in broken down vehicles and more.

Yet for those moments when the music is rocking and the crowd is rocking, it is very much worth it.

If you get the chance, take it. Get your pro attitude on and expect the unexpected.  Watch, learn, challenge yourself and don’t be ashamed or too big to “fake it” if called upon to do so.