Summer of Music: On the Road, Part 1 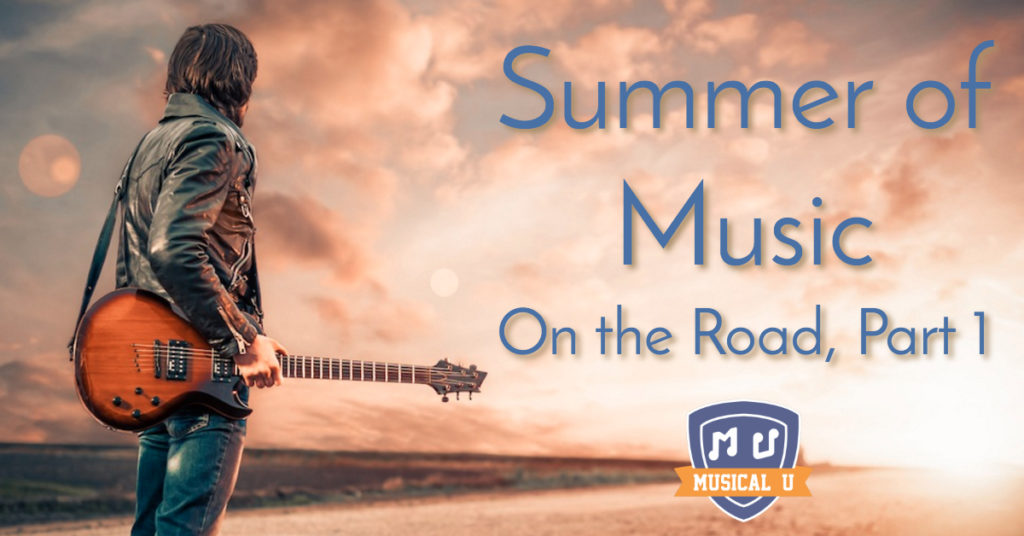 This last summer I had the privilege of working doing something I enjoy: playing music. I’ve played professionally for many years now, but this was different. I had never done such extensive road work. Though my chops, preparation, professional and personal attitude served me well on tour, I also found that I could expect the unexpected – and learn from every experience

In my career, I have played quite a bit locally and in church with a few times being on road. Last Spring I received a call for a summer gig to play guitar for a popular performer. He had made a decent career out of musical tribute acts. His list includes Elton John, Billy Joel, Rascal Flatts, a Disco tribute and a tribute to the music of the 80’s. He has been doing this for at least 15 years for many corporate gigs, as well as Disney World, Universal Studios and much more. Yes, it seemed like a great opportunity – and a challenge. The show schedule started in May and went through August – 15 to 20 shows in Ohio (my home state), Maryland, West Virginia, New Jersey, New York, Connecticut and Pennsylvania. Many of the shows were in casinos.

Planning was my first step. I loaded all the songs onto my iPod and listen as much as I could. Then I printed out music for chords, solo breaks and more. With such a variety of tributes to prepare for, I prioritized the shows in order of the tour.

Once everything was organized, I moved on to the actual practicing. For this gig, there would be no band rehearsals. Yes, you heard me, no band rehearsals! That meant that I was expected to know all my parts for five full shows inside-out before I had even met the band in person.

I would be showing up at the gig for a quick soundcheck with one song, maybe half a song, and boom it was showtime.

My employer sent backing tracks and live tracks for everything, plus the originals of all these famous songs were readily available. I would do a lot of my practice unplugged by my computer with an acoustic or even an unplugged electric so I could hear very clearly what I was doing.

I focused my attention on getting the rhythms right, and writing out the signature guitar riffs and licks when necessary. Once I got to a comfort place unplugged, I connected the computer to my stereo, plugged into my amp, and cranked up the volume to simulate the stage experience.

It was a lot of work, but every bit of my preparation paid off big time once we hit the road.

If you plug in your guitar and no sound comes out, it doesn’t matter how much you practiced! I made sure that my amp, effects rack, and cords were all in good shape. My main cord has a silent end which negates the “pop” you get when unplugging your guitar – very handy when you’re keeping two guitars on stage.

I even bought a backup amp in case my first one bit the dust. I invested in a really sturdy and protective amp case. All the gear was hauled in a large trailer behind the van so I wanted to make sure all my gear was in good, hard cases. Even I didn’t realize just how valuable my preparation would be, because once the tour was underway I was presented with much that was new and unexpected. Having myself in a good place with my part of the job allowed me to embrace those learning experiences rather than be overwhelmed.

The First Show: Seeing the Light

Ok, the first set was a little rough. My amp was acting up which made hearing hard. Also, with the quality of the stage lighting, I wasn’t able to read my chords and lyric sheets. Oddly, my reading glasses made it worse. Lesson learned: after the show I went back and printed up my music in bigger fonts.

During the first song, I must have been a little nervous as I broke into Billy Joel’s  “Big Shot” faster than the click track which was in my ears. On the plus side, there was no train wreck as I gathered into the correct feel and kept going. After that, the show went really well for the remaining sets.

After the show, we went out and found the battery dead in the van. By the time we had it started, the rain had started too – so we loaded the van in the rain. That’s always fun when you’re trying to protect your valuable equipment. By the time we hit the road, all three of us were beat. On the way home, we stopping at a travel center and took a nap break. When you’re tired it’s a good thing to just stop, recline your seat and take a siesta.

Another little tip for all: when you’re on the road watch what you are eating. Stay away from things that upset your stomach. You don’t want to deal with that when you’re traveling in areas with minimal rest stops – and neither do your band mates. And always keep an ample supply of kleenex, napkins and more in your vehicles.

Part of the challenge over the summer was having so many different musical shows to play versus just one or two. The next show was different (Rascal Flatts) so I had two more sets of music to get down.

Altogether the show went well, though I found a few things to fix before the next Rascal Flatts show. I was surprised by some unexpected key changes. When you don’t have rehearsals, this is the stuff that creeps up on you in the moment. Transposing the leads for one song wasn’t too bad. But the other changed from F to D, which made it rough to transpose guitar leads on-the-fly. One big thing I learned from my band mates: if in doubt skip it and/or stick to the rhythm. Keep going, no matter what. While it took a little getting used to, the click track and backing track kept things pretty much on point.

“Batteries, batteries,” and did I say, “Batteries?”

One big lesson for the show was knowing to have spare batteries for the in-ear monitors. Do not expect that the batteries will just be there – have your own with you. Four songs prior to the end of the show, all of a sudden the in-ears went out. We had come to depend on those things. It was ok during the middle of the songs, but the backing tracks had count-offs for all the intros, breaks and outros.

Again, I was grateful for my intense preparation. I focused in on the drums and kept an eye on things to keep things tight.

The battery thing goes for all your pedals, tuners, wireless mics, having your tablet charged if you use one – always keep spares close at hand.

Two shows in and I had already learned so much! Yes, there’s a whole lot behind the scenes that goes into a professional tour like this. Not exactly what you think about when you’re jamming in the practice room. And the learning didn’t stop! Please look out for Part 2 of my Summer of Music.