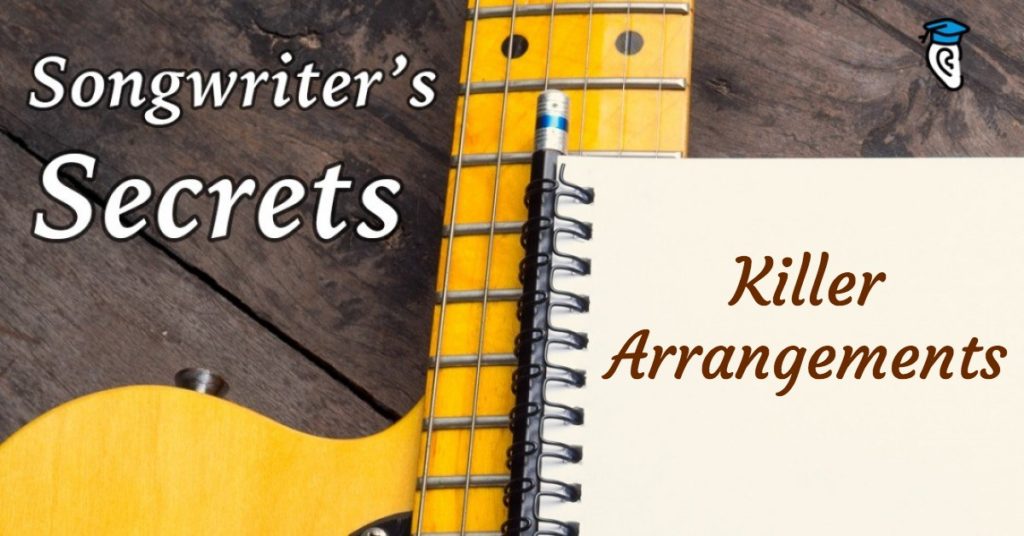 So you have an awesome tune with a good melody, solid hook, and great lyrics. What’s next? Before you can get to the final live performance or recording stage, you need to arrange your song.

Unlike other aspects of songwriting, arranging is actually very flexible and sometimes a little easier, especially if you play an instrument or are working with your band. Sometimes jamming through a song with your band is all you need to come up with a good arrangement. Your final arrangement may even change to suit the venue, what instrumentalists and singers are available, the rehearsal time frame, and your audience.

What is arranging? In a nutshell, when you arrange a song, you are deciding which sections go where in a tune, the vocal range, musical style, and which instruments will play which parts.

Your song probably already has these key sections: Verse, Chorus, Bridge. When you arrange your tune you might want to add an Introduction, a Coda (an added short section usually at the very end, also called a Tag or Outro), a drum or guitar solo, etc. Typically your song will have sections of 8 or 16 bars. Keep this in mind as you write, since many times the easiest way to change up an arrangement is to reorder these sections.

Check out this article on Alternative Song Structures for more creative ideas regarding song structure.

Imagine your arrangement is a painting. You add in the key features and then work up the full song around them. For example, maybe your singer is awesome at vocalizations so you open up the tune with a sweet vocal solo with some light guitar underneath then bring in Verse 1 with the full band, or maybe you have a great drummer, so you decide to have everyone but drums drop out in Verse 3 before the big build. 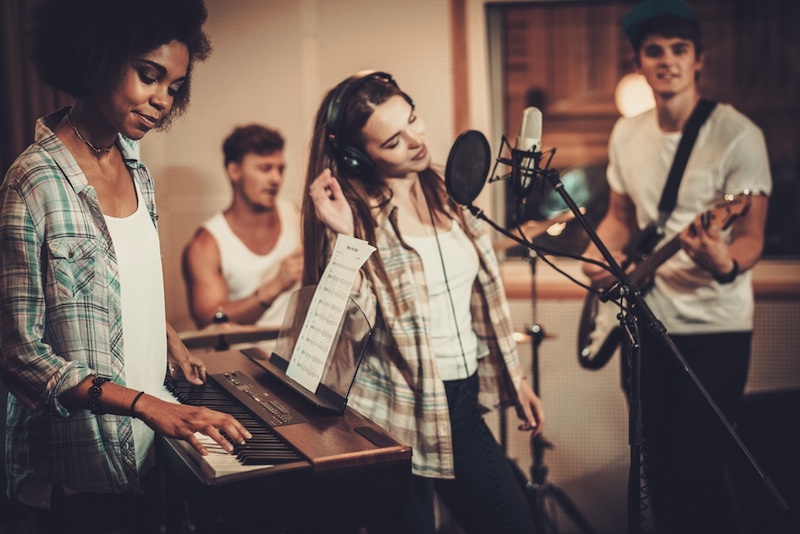 Once you have your song written, the best (or at least the most fun) way to figure out the arrangement is to play it live. So pick up your keytar or call up your bandmates and get ready to jam through your tune. Remember to be flexible as you try out different arrangements and sounds, but don’t be afraid to put your foot down if the lead singer insists on a kazoo solo for the intro or decides to change up your carefully written verses in lieu of some “La la la”s.

When you are arranging you need to keep in mind the practical and logistical details. For example, are you working on a song destined for radio airplay? Then you probably need to keep your arrangement to three minutes – meaning your carefully-crafted verses 6 through 10 never make it – at least not to the radio version.

Are you writing to soundtrack a media project like a video game or film? Better chat with the director of the project to make sure that what you are arranging fits what they need for the project.

Is it for a live gig with an enthusiastic crowd? Maybe a second or third time round with the chorus or a killer guitar solo would wow them even more.

Recording needs are also something to think about. Are you producing the mix on your computer or in a live studio? At home you have plenty of time to experiment and see what you can come up with. Bands like The Beatles were notorious for messing with the arrangement and mixes of their tunes, well after the engineer headed home for bed! If you are renting studio space, though, you probably just need to set up the arrangement ahead of time and stick to it. Save messing with the arrangement and experimentation – at least until after you have a solid cut of your tune.

No one says you have to stick to one permanent arrangement. You can always change your arrangement later in the game, especially if you are the music producer for your own songs.

You wrote a heartfelt folk song? A little bit of work on the rhythm, beat, and song structure will give you the material you need for a convincing 20-minute dance remix for the clubs. Or you might tone down a heavy rock tune by creating an acoustic version.

No matter how you decide to mess with your song, be sure that the new arrangement makes sense. You don’t want to repeat the chorus ten million times for a radio tune, and most likely if your song has more than a handful of verses, it might not be radio ready. No fear, you can always add that fifteenth verse in the remix or a future alternate cut.

Many, many hit songs have a key change near an important and energetic part of the tune. When you change keys, you are essentially moving the entire song up or down in pitch. This video has twenty well-known key changes back to back:

As you listen to each tune, notice how the key change typically adds some energy to the song. When making a key change in your own song arrangements, be sure that you keep the singer’s vocal range in mind. Some key changes may strain the singer’s voice, which means that instead of building energy you might be setting yourself up for a crack in their voice or bad intonation that results from vocal strain. On the other hand, a well-designed key change can allow your singer to move into an even more powerful range to hammer home a final chorus.

Let’s explore the impact a change in arrangement can have on your songs. Below are several different arrangements of the same song. Notice how the melody and the lyrics generally stay the same, but the arrangement differs. And while we normally wouldn’t be chatting about a kid’s tune, Let It Go from Disney’s hit Frozen has become a worldwide phenomenon, crushing every competitor in every music category. (For those of you who spend time with kids, I humbly apologize for bringing up a song that you have probably heard a thousand times by now…)

In this original version of Let It Go, Broadway superstar Idina Menzel belts out the famous song with a fully orchestrated symphony behind her. Notice how there are changes in the song to match the animation. As mentioned above, when you arrange a song as part of a film soundtrack or other visual media like a video game or webisode, be sure to chat with the filmmaker about timing and how best to sync the song with the visuals. In this tune, both song and animation builds perfectly together, with a compelling arrangement that marries animation and tune neatly.


Demi Lovato sings the “pop” version of “Let it Go”.

The official pop version differs substantially from the full film version in instrumentation, letting go(!) of all the orchestral extras and taking on a typical pop arrangement. You might notice that some of the words are different, with additional verses that did not make it into the film.


FallenSuperheroSG revamps Let it Go, turning it into a pulsing dance tune.

In this fan version of Let It Go by music producer FallenSuperheroSG, you can hear how the arrangement superimposes a dance beat and electronica under the original tune, even manipulating the words to create a familiar dance sound. Playing this version back-to-back with the original soundtrack version starkly demonstrates how drastically an arrangement can chance a song.


This rock version adds in hard drums and a male voice by NateWantstoBattle.

This rock cover of Let It Go brings up another interesting point. Just because you wrote your tune for a female doesn’t mean that a male can’t sing it! The addition of heavy drums and guitar in this version demonstrates that any tune can be arranged almost any way you want. It just takes a little imagination and arranging know-how.

So now you know both the potential and the practical how-to of arranging your song. Maybe it’s time to dust off one of your oldies and give it a new twist, or perhaps you have a promising new song you’re working on which can now be given a more ambitious and interesting arrangement than you’d realised. Be sure to push your limits each time you arrange a song and you’ll be creating remarkable and musically powerful arrangements in no time.