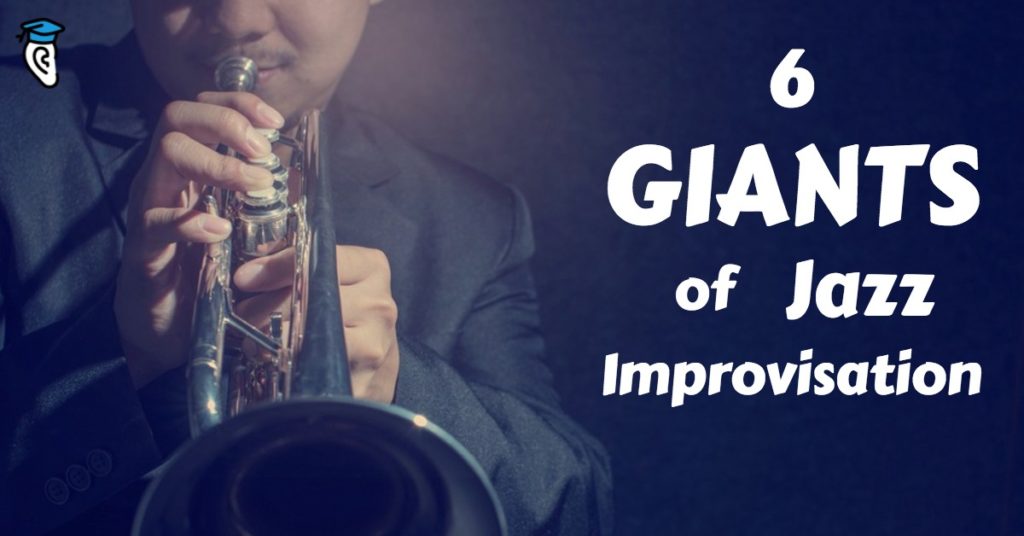 Just like in any other genre, there are certain artists who have had an enormous impact on the whole jazz scene. Those who follow try to copy their sound and then move beyond to be creative forces in their own right. Despite living in different eras, and representing different niches of jazz, some qualities are common to all of them. Qualities like passion, leadership, virtuosity, and fearless innovation.

Read on to discover six of the true “giants” of jazz improvisation through the ages and what you can learn from them to inspire your own improvising.

Charlie Parker created the blueprint for post-swing jazz improvisation. Even now, 70 years later, musicians play the phrases and techniques he created. Serious jazz students internalize Charlie Parker’s personal language of jazz improvisation through transcribing  and playing his solos, analyzing them in detail, and learning specific quotes (i.e. musical phrases) in all the keys.

So why is Charlie Parker so important to the jazz scene?

Listen to Parker’s solo on “Confirmation” starting at [0:43]. It’s a virtual catalogue of his trademark techniques—endless arpeggios, chromatic lines, impeccable sense of swing and instrumental dexterity. His influence extended beyond the jazz world: the cartoon Woody Woodpecker laugh is actually an imitation of a famous Charlie Parker lick.

Storming the scene in the 1950s, John Coltrane collaborated with such seminal artists as Miles Davis and Thelonious Monk. Coltrane’s unmatched virtuosity has carved him a place as one of most sophisticated jazz improvisers to date.

Coltrane’s groundbreaking improvisations are studied intensely by many jazz aspirants. He explored the frontiers of tonality with pieces like “Giant Steps”, and helped define modal jazz, free jazz, and beyond with works like “My Favorite Things” and “A Love Supreme.”

Like Charlie Parker in his day, Coltrane’s new harmonic concept challenged his peers. When he broke free from traditional tonal chord progressions with “Giant Steps” he was pretty much the only one to nail it. The harmonic changes of this record became known as the Coltrane Changes. The chord roots are all a major third apart, thus integrating whole-tone scales, interesting sequential patterns, and the scale now known as Coltrane’s Pentatonic (playing the 1st, 2nd, 3rd and 5th degree of the current chord).

Besides constantly shifting tonality every bar, “Giant Steps” is also played at an insane 300 BPM. Watch this animated sheet music video of “Giant Steps” and see the Coltrane Changes and Coltrane Pentatonics come to life in his jaw-dropping solo [0:35].

A quiet guy, Bill Evans made a huge impact. Among the people he influenced are Miles Davis, Herbie Hancock, Pat Metheny, and Keith Jarrett His exquisite taste in harmony—he was left handed which explains his complex accompaniment—and melodic approach earned Evans an iconic status among generations of jazz musicians. A little-known fact is that he helped develop George Russell’s Lydian Chromatic Concept of Tonal Organization. This concept was the foundation for styles like Modal Jazz and later on, Fusion.

This is one of the most famous performances by Bill Evans called “Waltz For Debby”. His solo starts at [2:43].

As did Charlie Parker, Bill Evans created a blueprint of jazz improvisation, but for pianists. His beautiful lines, stylish accompaniment and perfect phrasing are studied by all pianists, and pretty much any jazz musician. Bill Evans created a new way for pianists to comp by using rootless voicings. He used the 3rd and the 7th degrees of the chord (these are responsible for the minor, major qualities of the chord) combined with upper structures, or embellishment tones. He left the root of the chord to the upright bass.

Known as not one of the most pleasant guys in the scene but, nonetheless, perhaps the most important genre innovator in jazz. Miles Davis started his journey alongside Charlie Parker playing bebop and moved forward helping to shape Cool Jazz, Modal Jazz, and Fusion.

He created one of the most-played jazz records of all time, was known to nurture the talents of the most important musicians in the generations to come.

Miles’ style of improvisation is usually very laid back, relying more on melody rather than playing the changes. Jump to [1:15] to hear an example of his improvisation. You can always recognize his “cool” approach when listening to his solo. He is great at working with motifs and developing them from a single note to a beautiful flow of ideas, just like classical composers would do.

Thelonious Monk is an amazing example of a pianist with a strong signature sound. While it may be somewhat difficult to distinguish between instrumentalists at times, you will never confuse his seemingly-sloppy piano stabbing style for anyone else’s. Making an enormous contribution to the overall repertoire of jazz standards, Monk is a musician and composer to be reckoned with.

Here’s a recording of “Blue Monk”. The tenor sax solo starts at [1:04]. Pay attention to the quirky accompaniment provided by Thelonious Monk: he was one of the first guys to inadvertently “brand” instrumental playing. Monk’s solo starts at [3:08]: notice the deliberate silences and the staccato approach. Additionally, he plays a lot with sparse intervals, and all with a certain swagger and rough humor.

Winner of a total of 20 Grammy awards, Pat Metheny is one of the pioneers of Jazz Fusion. Drawing a lot of his influences from the sounds of South America, Middle East and the works of classical composers (especially Claude Debussy) this guy can really paint a whole sonic landscape in front of you.

Also known for his work with synthesizers, he was one of the first musicians to start using a guitar synthesizer. Check his solo starting at [6:06], on “Imaginary Day”. One of the improvisation techniques that he uses a lot is a highly modal approach with diatonic and chromatic sequences. All coupled with tons of FX processing on his guitar (often made to sound like a trumpet), his shows are one of the most spectacular in the jazz realm.

On the Shoulders of Giants

As Igor Stravinsky, a great composer of the 20th century, once said, “Lesser artists borrow, great artists steal.” The giants of jazz spend lifetimes acquiring their sound and style, leaving behind the gift of their massive legacies. As jazz improvisers, why not open our ears, hands, and minds to receive these gifts?

As children, we mastered the language of our parents through listening and practicing our skills until we could reproduce the sounds. Eventually we learned to express our most complex thoughts with fluency. So we can stand on the shoulders of the jazz giants by listening, transcribing, and practicing their language of jazz until it becomes our own.

Want to grow your jazz improvisation to massive proportions? Here’s the recipe: grab your favorite jazz solo, find your favorite lick, sing it, transcribe it, learn it on your instrument, and transpose it. Each small bite of this “giant food” will leave you wanting more!