Jazz Improvisation Evolution: A history of jazz by ear 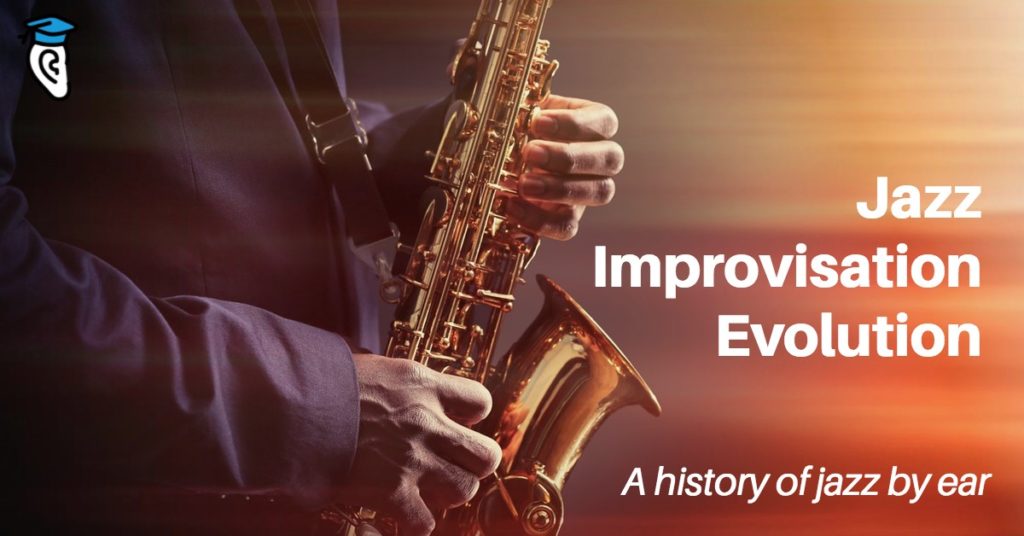 Jazz emerged about one hundred years ago and the history of jazz shows us a genre that has never stopped evolving and growing. At its earliest stages, in the 1920s it was the pop music of that time and soon after it became a laboratory for musicians to perfect their virtuosity.

Jazz saw its peak during the roaring 20s and the swing era. Dominating pop charts, it was a music for people to dance to, just like today’s banging EDM! Jazz’s decline in popularity started the moment it stopped being a music for the dance floor and became a music for the mind.

We’re going to take you on a ride across the most important periods in jazz (a kind of “history of jazz for your ear”) and what was happening to improvisation during these specific segments of time. We’ll be listening to the “roaring ’20s”, swing, bebop, cool jazz, hard bop, free jazz, avant garde, fusion, and contemporary jazz. Let’s dive in and hear how jazz improv has evolved through its history.

In the 1920s jazz emerged from the Chicago Dixieland and the New Orleans scene. The most prominent figure of this time is Pops, a.k.a. Satchmo, a.k.a. Louis Armstrong. The sound of this era featured a lot of blues and ragtime influences.

Typical instrumentation would include: trumpet or cornet, clarinet, guitar, piano, tuba or upright bass, and drums. More “horns” (saxophones, trombones, etc.) were added as the decade went on.

Jump to [1:00] to hear a guitar improvisation from Louis Armstrong’s “Savoy Blues”:

Here the improvisation is rather restrained and relies on the blues scale to construct simple melodies. Satchmo’s solo begins at [1:30] and is a display of ease and effortlessness.

During the “swing” era jazz music made its way to the pop music charts and featured large ensembles (big bands) and written arrangements. The improvisation during this era was reserved for certain spots within the arrangement and wasn’t the main focus of the performance. However it was still a time for a soloist to shine and show his chops (meaning instrumental virtuosity).

Here’s Duke Ellington and his band performing “One O’Clock Jump”:

You can hear musicians taking turns in improvisation starting at [0:51]. The solos are played over the big band accompaniment and are fairly short in duration, lasting only one chorus each.

From this point on jazz entered the realm of art music. Bebop was first met with outrage: it was impossible to dance to, the tempos were extremely fast, and rhythmical, melodic and harmonic contents were unpredictable for the untrained ear. Bebop coincided with many cultural movements, and attracted an audience of avant-garde writers, painters, and poets.

Pioneered by alto saxophonist Charlie Parker a.k.a. Bird, bebop became an outlet for musicians to show off their chops. Bebop pushes improvisation to the foreground, and features a trio, quartet or a quintet rather than a big band. Here’s his “Anthropology”:

Bird’s solo starts at [0:28] and you can clearly hear the difference comparing to previous eras. He constructs melodies with longer and faster phrases, chord tone arpeggios, and the extensive use of chromaticism.

The sound of “Cool Jazz” is what the name implies. To counterweight the bebop of the East Coast, the West Coast of United States resorted to a more laidback and chilled approach. Overwhelmed by head-spinning tempos and constant shredding, musicians started to look for new ways of expression. One of the most prominent figures of this movement was Miles Davis, who started his career playing bebop with Charlie Parker. Listen to Miles Davis’ “Boplicity”:

Miles’ solo starts at [1:59] and is a perfect display of confident “cool”. The phrasing is still quite similar to bebop.

Some of the most notable figures in Hard Bop were Cannonball Adderley, John Coltrane, Charles Mingus, Sonny Rollins, Miles Davis and Herbie Hancock. This genre relied heavily on gospel, blues and a more emotional approach to improvisation. During this era you can hear a shift in improvisational tendencies with musicians exploring scales and their modes in addition to playing the chordal changes like in bebop era.

Herbie Hancock’s “Maiden Voyage” was on the verge of modal jazz, hard bop, and post-bop utilizing the elements of all these notable genres.

Listen to Freddie Hubbard’s solo starting at [2:24]. Pay attention to the modal phrases, and slightly different improvisational language than in bebop. Modal improvisation has been gaining a lot of popularity recently and influencing the next wave of jazz musicians and their style.

This is perhaps where the common misconception about that improvisation is “playing whatever” comes from.

Here’s a song by free jazz pioneer Ornette Coleman. If you listen to the record from the beginning you can hear that the melodies are constructed very differently now. There’s a lot of emphasis on expressive shifts in timbre. Here is Ornette Coleman’s “Lonely Woman”:

Jump to [1:47] to hear Ornette Coleman’s solo. The rhythm section isn’t playing the form in a conventional way and the same goes for Ornette’s solo. Moving beyond the traditional sense of form and harmonic content, free jazz can be hard to follow for the uninitiated. Focus on the exuberance and direct emotional expression rather than trying to figure out where you are.

This era is known for a wide use of electronic instruments and combining multiple genres into one. Prominent musicians in this genre include John McLaughlin, Herbie Hancock, Chick Corea, and Pat Metheny. Miles Davis continued as a fusion innovator, and as an innovative front-runner in every other jazz style to emerge during his lifetime.

Turn to [3:18] in this video for John Mclaughlin’s “You Know You Know” and see just how far out jazz went by the early 70s:

In this case the improvisation is done over a groove and a constant single tonality drone, rather than chordal changes. This allowed musicians to focus on the beauty of modes and explore the melodic context.

Since the 1990s jazz has become so diverse that it’s hard to find one solid style. Instead, musicians have freedom to do whatever they want, and there’s everything (bebop, avant garde, modal jazz, swing etc.) all blended together. Some of the tendencies of the contemporary jazz are:

Jump to [3:10] in Bill Frisell’s “Pipeline” to hear his solo. Notice the use of timbres and effects. He’s a perfect example of a musician working with sound in a new way. Rather than playing changes, it seems like he’s painting a sonic landscape instead:

History of Jazz: 100 years… and counting!

The history of jazz spans a hundred years now, and looking back those were some crazy years! Throughout the century, jazz has evolved into one of the world’s premiere arts of improvisation. Jazz has pushed to the limits of Western tonality and beyond.

Today’s jazz musicians have all the resources of this rich history, which has been almost entirely documented in recordings. And now the unlimited possibilities of electronic sound design have reached the level of spontaneous expression requisite to fluid jazz improvisations.

With all these new possibilities, we can only guess the future of jazz. And jazz is not the only improvisational tradition to emerge in the 20th Century. Look out for our next improvisation post where we’ll be exploring the special character of rock improvisation.

The history of jazz has been fascinatingly varied and exploring each of the eras can be a real treat for a musician’s ears. Take the time to learn more and listen more to each period described above and expand your musical ears!