The great jazz singer Ella Fitzgerald, famous for her rich voice and agile scat solos, once said, “I stole everything I ever heard, but mostly I stole from the horns.” There’s a reason she was one of the great jazz artists of all time—she knew how to listen. Not only did she listen to the melody of a song, she listened to and learned from masters of other instruments, as well.

Music is built on the tradition of the passing down of musical ideas from one generation to the next and from one artist to another. Listening to the great masters is vitally important if you want to learn to play jazz guitar, break songwriter’s block or move musical ideas forward—just to name a few benefits.

But first we would like to introduce you to a very special person at Musical U! 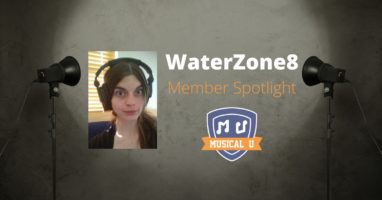 Musical U is growing rapidly and are very excited to have so many cool new memberonies on board! This month Musical U highlights one of their most active and appreciated members, WaterZone8. Her hard work and progress serves as an inspiration to the Musical U team and to other members. An aspiring metal musician, WaterZone8 joins the Musical U blog to share her story and some of her biggest challenges and successes so far as a member of Musical U.

Exploring Music of the Renaissance The history of what we refer to as “classical music” is immense! So how do you begin to dissect 600 years of amazing musical expression into digestible pieces for the sake of study? You start by breaking it down into eras, as musical historians have done. This week we take a closer look at a lengthy bit of music history—the Renaissance era—which existed roughly from 1450 to 1600. This era saw the coalescing of the understandings of harmony, early chromaticism and rhythmic development, which were the elements that would eventually become the foundations for all the western music to follow.

Vocal music from the Renaissance period is still performed by choirs today! For more on the history of Renaissance music, East Tennessee State University has this instructional video.

If you would like to learn more about Renaissance music in general, have a look at this article from Lumen Learning. From theory to a great historical infographic, it’s a comprehensive study guide to the era.

Polyphony—the simultaneous layering of many melodies in one piece of music—is a major characteristic of Renaissance music. If you would like to try polyphony in your own music, have a look at this video from Soundfly.

Speaking the Language of Jazz The aim of jazz is to improvise, but learning how is usually a massive struggle for most aspiring jazz musicians. We recently asked Dr. Stefan Hall, humanities professor and professional jazz guitarist in Green Bay, WI, how he learned to teach himself to play jazz guitar by ear. Dr. Hall has discovered that when learning how to play jazz, it’s better not to just memorize what other people have done, but to learn how they came to make those musical decisions—to learn how they speak jazz.

In part two of our interview with Dr. Hall, he explains how playing along with recordings of jazz masters teaches you their language, if you know how to listen.

So how do you go from listening to recording to actually playing what you hear? Jazz Guitar Lessons explains how in this video tutorial:

Would you like to take Dr. Hall’s advice and start playing with recordings, but don’t know where to start? Vinyl Me, Please lists the ten best albums for a jazz beginner. Musical U recently had the opportunity to interview Susan de Weger, founder of Notable Values, a resource for independent thinking about self identity, career development and success for musicians. Susan is a pioneer in the movement towards teaching musicians to become entrepreneurs and manage their own careers, a vital skill in the 21st century incarnation of the music industry. In part two of Musical U’s interview with Susan, they spoke to her about the evolution of the profession of music and her vision of what it is to become.

Part of Susan’s philosophy is to take control of your own musical career by being both musician and entrepreneur. iCadenza lists the three pillars of success to manage your career without compromise.

We love Susan’s approach to a career in music and can’t get enough of her excellent advice. In particular, we enjoyed this guest post Susan penned for Artshub about how to write your music resume.

All songwriters experience writer’s block at some point and face the frustrating struggle to break it. There is a rather easy way, however, to break the block and to start or finish that piece of music you’ve been imagining in your head.

It’s a common practice in the music industry to use the tracks of other artists as the basis for writing a new track, and this week we shared with you how to actively listen to and analyze a reference track, which is a track of music you choose from another artist that emulates what you wish to compose.

Write first, think later! To boost your songwriting creativity and inspiration, follow this simple two-part approach to songwriting as laid out by Making Music Magazine.

Ah, the sweet mysteries of life—and songwriting! Guitar Noise has these inspirational tips to “shape the invisible”, as Leonardo Da Vinci called songwriting.

Are you a Rap artist and can’t decide what to rap about? Cole Mize studios have this great list of ideas to destroy rapper’s writer’s block.

By listening to and learning from the masters, you open up whole new possibilities and worlds of inspiration for musical expression. Don’t be shy about doing it, either—all the great musicians did it, too!

From Mozart borrowing from Bach to Ella Fitzgerald singing transcribed horn solos, it’s tradition to learn from those who came before you. After all, when you really apply active listening to the greats, you will find that you are not copying them—you’re learning to speak their musical language.