Home » How To » Playing By Ear » Play Along, with Stefan Hall

Play Along, with Stefan Hall 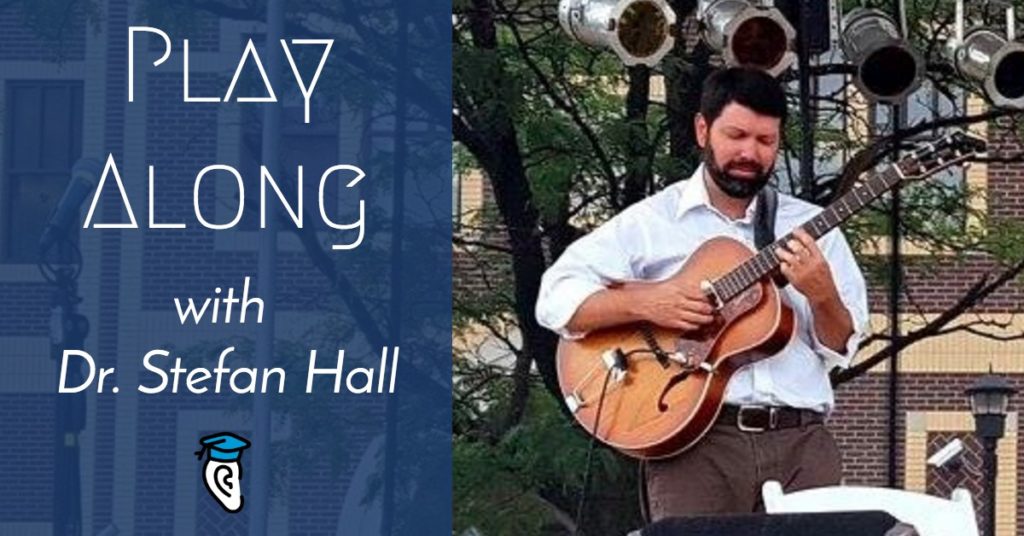 Stefan Hall taught himself how to play guitar by ear. Now he has a thriving career as a performer and a university instructor. In this second part of our fascinating interview with Stefan, we asked him to go into greater depth on his play along by ear method of learning and teaching jazz.

Q: Last time we spoke, you described how you taught yourself how to play guitar by playing along with Led Zeppelin records. How did you learn to play jazz?

Lots of listening, but even more so playing along. I’ve played with John Coltrane and Charlie Parker and Miles Davis—

Really? Did they know you were playing with them?

I hope not! I keep those activities at home. I’ve played along with Fred Astaire movies. I take a solo for the whole movie, learning some of the melodies—just play over everything except for the talking parts  If I were in the theater playing my guitar along with a Fred Astaire movie they would escort me out.

Q: Would you call that noodling?

Some people will call that noodling. I think of it as learning. There was no judgement, no audience feedback, I could try anything and when I was hitting wrong notes I could tell because it would clash with what I was hearing.

Q: So are you actually playing note-for-note what you hear on these recordings? There are people who memorize Django Reinhardt solos note for note. They do this by ear and that’s impressive. But I never wanted to do that—I’ve never tried to play a note for note solo because that’s not the aim of jazz.

The aim of jazz is to improvise. I want to know how they came up with the ideas, I want to hear them speak. It’s like learning to talk, you hear people speaking, you don’t necessarily say the exact same phrase that they do but you learn the words. You learn how to speak and express yourself.

When learning how to play guitar, how to play jazz, how to improvise, it’s better not to just memorize what other people have done but to learn how they came to make those musical decisions. That’s what makes my notes sound “right”, even when I’m playing different notes than the recordings.

When you do this enough, you start hitting some of the same notes and even phrasing things similarly. It helps create your style but it’s also informed by the masters. You’re not just copying people—you’re actually learning the language of jazz, you’re learning to speak it on your instrument.

So I played along with Marian McPartland’s piano jazz radio show—she couldn’t hear me, I could make all kinds of mistakes. Eventually after I’d done this for a few years, I was making fewer and fewer mistakes and I was actually starting to sound like a jazz musician—but not like any one particular jazz musician—I was sounding like me.

Q: Earlier you mentioned quite a few piano and horn players. You don’t just listen and play along with guitarists?

No. It’s important for guitar players to listen to other instruments. As much as I love Kenny Burrell, if you do nothing but play along with him, you will sound like Kenny Burrell and not yourself.

Q: Would it be helpful to listen to singers?

It is. Now can I tell you my other secret?

For most of the jazz standards, I learned all of the lyrics. This helps impress the melody into your brain.

You can hear the melody of the language even if it’s just a poem. The ancient and medieval poetry that I teach and love—Homer, Beowulf—was meant to be sung. You can hear the natural rhythm in the poems themselves, you know that the words and melody went together. This was a mnemonic device.

We can learn so much about musical phrasing and rhythm from the lyrics and those who sing them. Take Willie Nelson. He may not be everyone’s cup of tea but his phrasing is incredible.

Because one phrase you’ll think, “He is never going to fit all those notes and all those words in.” He’s going to get them in there and he’s going to do it musically. It doesn’t sound forced, it doesn’t sound like he’s drunk or slurring his words. It just sounds like he intentionally started halfway through that measure just so that he could pull off a little triplet here later on and finish up right on the beat.

Q: Somebody like me who is a classically trained singer who is now getting into jazz, I have no idea how to improvise, no clue.  I started learning by copying the great singers and listening to how they improvised, learning how they made these informed choices. But I don’t want to copy singers—especially somebody like Billie Holiday whose style is so particular.

Listen to as many singers as you can—not just your top four. And listen to the horn section.

That’s where Billie Holiday comes in again, her style was so distinct because she was hanging out with jazz musicians, horn players—and she tried to sing like them. That informs her style.

Here’s my advice for singers: listen to the instruments. Ok, you’re not going to be able to listen to John Coltrane necessarily and learn how to sing like he played saxophone. But try a saxophone player like Lester Young or Ben Webster. Ben Webster is a great one to listen to for singers, big throaty sound, lots of vibrato, plays melodies like you would not believe.

Even if it’s something as orchestrated as a big band and you listen to the sax section. When you hear how Duke Ellington or whichever composer made the saxes phrase this particular section, you can learn something about phrasing.

How does your play along ear training method figure into your teaching?

If you were my student, I’d have you play solo lines over the whole CD and hear how your playing fits in or clashes with what you’re listening to. Eventually you’ll start to learn the vocabulary. Then I’ll say, “Go back and pretend like you’re the rhythm guitar player. If they called you up and said, ‘Hey, we need a rhythm guitar player for the John Coltrane quartet tonight,’ could you play something meaningful with that group?” A lot of times they can.

And often it’s like,”Well, I’m glad no one was listening.” Maybe four, five years down the line you will feel otherwise, you’ll feel like, “I could almost hang with those incredible musicians because I’ve been practicing with them for years”

Q: That’s interesting. It seems like you’re teaching much more than scales and patterns. What we call here at Easy Ear Training “musicality.”

Absolutely. I want them to have that experience, it’s make-believe. They’re pretending they’re playing with Bill Evans trio and you need to have a certain level of musicality to do that. Then when they get on stage they bring that experience, that memory, to the stage.

It’s not just the notes that you’re going to play—it’s also the approach to playing with the band. The greats are adventurers, pioneers. When it’s just you alone with a jazz recording you can try things that might not work. You can try to be very adventurous because you don’t have an audience.

But what happens if you pull it off? That’s great. Now you go, “I can try this out on a real audience.” When you’re practicing to be a jazz musician, gear everything towards, “I’m going to try this next time I’m playing with the band” Or, “I’m going to be prepared the next time I step on a stage.”

Then when you get on stage you don’t necessarily even have stage fright because you’ve already done it in your mind.

That’s right, you’ve already done it. It’s like the little kid playing: he’s taking penalty kicks and pretending like he’s winning the World Cup on the playground. Then before you know it he finds himself a star in the real game.

Fantastic, Stefan! I love how so many elements of learning music—from technique and theory to listening and attitude—come together organically in your play along method. It seems like such a simple idea, but with the right intention the possibilities are huge.

We’ve had such a great time chatting with Stefan Hall about his musical life and far ranging ideas for learning jazz. Look out for next time when we learn about his approach to modal music theory.

Ready for some of the most profound ear training out there? Look no further than your media player. You’re listening to the music anyway, so go ahead and pick up your instrument and play along, Stefan Hall style. With determination, careful listening and lots of practice, you’ll find yourself making great music with your favorite artists. And come closer every day to bringing those make-believe sessions into reality.