Pitch and Timbre: Hearing the Difference 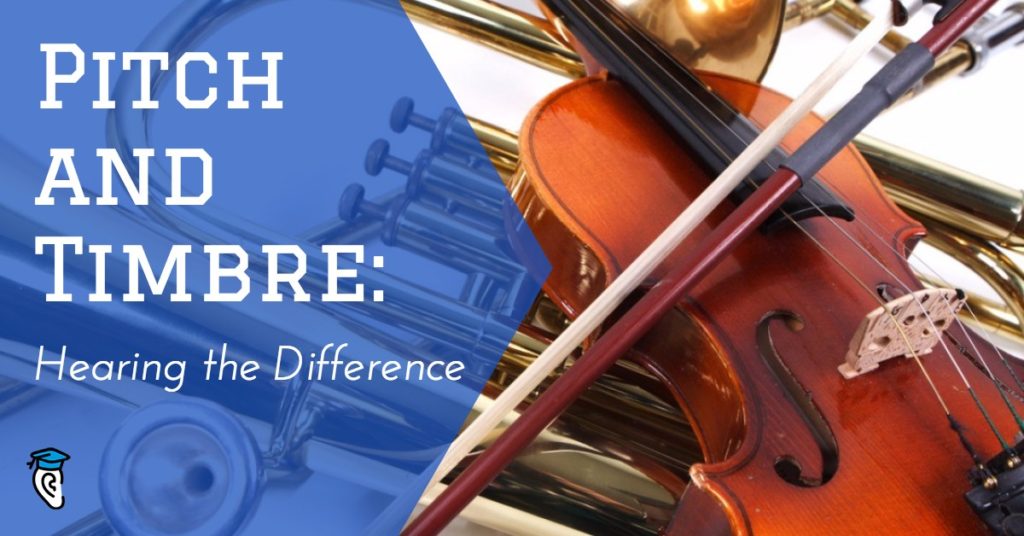 As you begin to learn more about music and go beyond the basics, you start to realise that some expressions used in music are a lot more complex than you think. The word “timbre” is frequently used and relates closely to many other aspects of musical sounds, which can cause a lot of confusion. In this article we’ll explore what “timbre” means, its role in music, and in particular how it relates to pitch.

A simple definition of timbre is that it is the “quality” of a musical sound, but that definition can be misleading. We don’t mean quality in the sense of good or bad, high quality or low quality. Rather we are talking about the “character”, the “shape”, the “colour” of the sound.

Immediately we must address the question of pitch: when we think of a note in music, its most prominent feature is its pitch, how high or low it is. So how does that relate to this broader concept of “timbre”? The answer is that they are related – but independent. Different notes can have the same timbre but different pitches, or share the same pitch but have different timbres.

Note: If you have studied frequency ear training you’ll know that a sound which has a pitch actually has a blend of various frequencies present. The particular mix of frequencies and how they vary over time is a large part of what determines the sound’s timbre.

A Bit of History

For many hundreds of years, pitch ruled the roost in Western music in terms of compositional technique. Pitch shaped the fundamentals of harmony and modulations (key changes).

During the 1600s and most of the 1700s instruments were only chosen for pieces in terms of the instrument’s range, in other words, whether it could hit the notes that were written down. While this continued on the most part into the 19th Century, instruments were now more refined and could produce a much bigger range of sounds – a.k.a. timbres!

Composers began using these unique timbres such as the warmth of the clarinet or the deep resonant sound of the double bass in a much more incidental way, giving the instruments roles within the pieces they were composing. In fact, this gave birth to the aptly-named “incidental music” towards the end of the 19th Century.

One example is Carnival of the Animals by Saint-Seans, where each movement depicted a certain animal such as the elephant, and the types of instruments used were chosen for their timbre. Naturally, an elephant is a large slow animal so the movement “The Elephant” was played entirely on double bass, therefore mimicking the nature of the animal in the instrument’s timbre.

Just after the turn of the 20th Century, composers began to free the concept of timbres from pre-defined roles in terms of the instruments. Music became far more experimental, breaking down the barriers defined by pitch and melody and instead turned towards the varied timbres that could be produced by each instrument. Melodies and rhythms were no longer the most important aspects of music and extended techniques began appearing in musical compositions.

While this kind of contemporary or experimental music is now more of a niche market, and popular music nowadays is deemed incredibly simple by comparison, there are still many types of popular music that use timbre as the main musical hook. Rock bands have been known to use unconventional techniques with their guitar-playing, such as Matt Bellamy from Muse. The fundamental trait of electronic music or drum-and-bass is the fact that there are no such restrictions on the timbres of electronic instruments, and creating your own sounds freely in the digital realm is what makes those genres of music stand out rather than the clever use of pitch in melody and harmony.

Listening to timbre rather than pitch is a great way of getting your ears to pay attention to the overall sound and what ingredients are present. Below we’ll explore timbre using a single pitch and show how you can learn to hear and identify pitches better without getting distracted or confused by the timbre of an instrument.

How To Identify An Instrument’s Timbre

Timbre helps our ears to identify different instruments from each other and as mentioned earlier this is closely tied to the mix of frequencies present in the sound and how they vary over time. Therefore one good way to start getting a better idea of timbre is to look at a soundwave of different instruments playing notes of the same pitch as each other. Notice how the soundwaves for each note look very different from each other: the guitar and piano have a more clear-cut “attack” at the beginning, while the sung note is much more variable. You can also find instruments with more of a swell in the middle of a note, such as with a violin.

This overall shape shows the “amplitude” (i.e. how loud the sound is) over time. However it is important to note that timbre does not equal amplitude alone! But timbre can be partially described in terms of what the sound’s amplitude is doing. So instead of saying “the piano notes sound clear” you could describe the timbre more precisely by saying “the piano notes have a clear-cut attack at the beginning and then a gradual decay”.

Timbre can also be described in very characteristic ways: resonant, shrill, bright, deep. These characteristics are more related to the mix of overtone frequencies present.

As you can hear in the clips above instruments can sound very different to each other even if they are playing the same pitch. By training your ear for subtleties of timbre you can learn to better appreciate the differences in pitch and timbre in the instruments of the music you listen to and perform. Let’s look into this more closely.

How Do I Distinguish Pitch from Timbre?

Remember that timbre is not measured directly, but described in terms of characteristics. If you have no reference to the pitch, a “bright” sound is always going to seem high in pitch, while a “deep, resonant” sound is going to seem low in pitch. However, once you learn to appreciate the difference between pitch and timbre you realise that’s not necessarily true.

Use a piano or a tuner to play A4. Listen to how it sounds in terms of timbre rather than thinking about the pitch. Then think about how that sound colour is representative of the mid-range of that instrument. Anything lower will sound deeper while anything higher will sound brighter. If an instrument is already very bright or deep-sounding, you have to also bear this in mind as your starting point! Now play an A4 on another instrument, such as a piano or guitar. Notice how the timbre sounds different though the pitch is the same. If that pitch is in the high range of one instrument and the low range of the other you will probably be able to hear that one sounds brighter than the other.

This next part requires you have some real instruments: take two (or more) instruments, find A4 on each one and play them together. This way you can get a real feel of what one single note sounds like across lots of different timbres. An A4 on the violin even sounds different to a viola, for example. If you can, take these instruments and try playing a melody together in unison – meaning at the same pitch. This is a great way to get your ears used to to pin-pointing pitch better without letting the timbre make it confusing!

Now you have started to explore the complex relationship and the differences between pitch and timbre, and begun to develop a keener ear for appreciating both aspects of instrument sounds you hear. So the next time you hear someone say they don’t like dance music because of the “repetitiveness” for example, just tell them to start listening to the timbre of the sounds used instead!

Timbre is still a very underrated part of music as it is still often overshadowed by its aforementioned rival, pitch. Both are important and musically valuable in different ways, and learning to hear the difference between the two is essential, whether you are writing music, or simply appreciating it.