Open Your Ears to Celtic Music 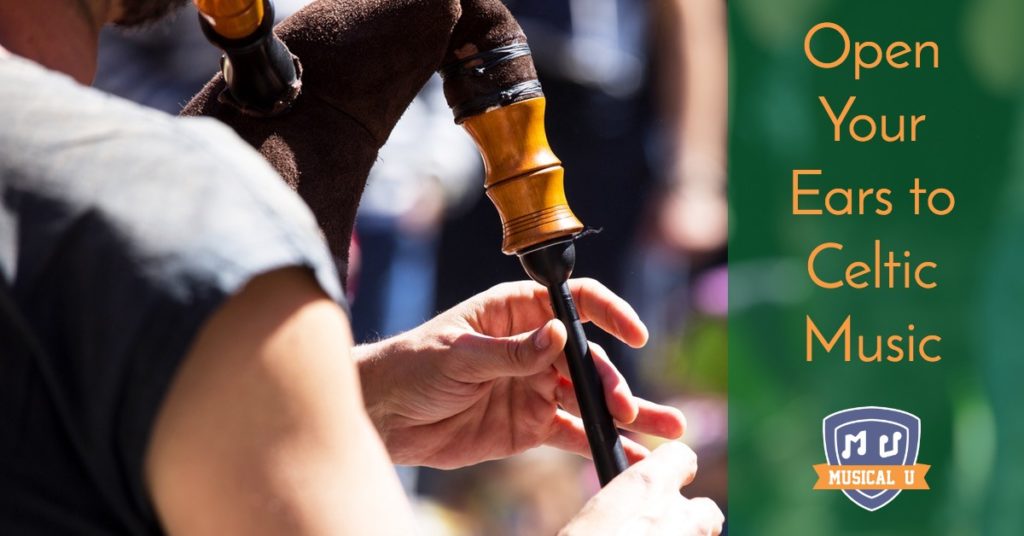 Like a pint of Guinness, there’s definitely a sense of charm, beauty, and mystery to Celtic music. Whether you’re Irish by way of ancestry or you’re Irish at heart for the day, St. Patrick’s Day is fast approaching and presents the perfect opportunity to add some Celtic music to your playlist. This begs the question: what makes music Celtic?

While anyone who hails from a nation identifying as Celtic may certainly label their music as such, we’re investigating the genre of music and all that falls under its umbrella.

Some hear the word Celtic and conjure images of faeries; others immediately think of Ireland. Who’s right? Well, both are! In the broadest sense, anything related to the Celtic nations (Ireland, Scotland, Wales, Isle of Man, Cornwall, and Brittany) can be Celtic. The distinctive music that emerged from this region all falls under the umbrella of Celtic music, with the Irish as the main producers of Celtic music’s traditional reels and jigs. At the time same, you can find Celtic musicians in other places in the world where Celts emigrated—groups in northern Portugal, parts of Canada, and the U.S. still strongly identify with their Celtic heritage.

While Irish traditional music features instrumental dance music (think reels or jigs) or a capella narrative songs, there are additional and specific elements that span the Celtic genre from Irish trad music to modern Celtic punk. Mainstays include certain instrumentation (more on that in a moment), interpretation of musical modes, and lyrics.

First, it’s common to hear Myxolidian and Dorian modes, as well as plays and puns on the pentatonic scale. It’s typical for the melody to play up and down the chords and scales – an elevator effect if you will. And while there are a clear beat and time signature (usually common time, 3/4, or 6/8 time), listen for swinging eighth notes, ornamental grace notes, and drone-based harmonies.

Another hallmark of Celtic music includes narrative lyrics – if the song has words, it’s bound to tell a story. A true narrative will have a beginning, middle, and end. Just the way the poem Casey at the Bat tells a story, so do narrative lyrics. The difference between a narrative poem and narrative lyrics is that the musical lyrics will contain some sort of chorus or refrain. One of the most well-known Celtic narrative lyrics comes from the tune Cockles and Mussels, known to some as the ballad of Molly Malone.

Just because the band hails from Dublin or because someone decided they wanted to form a Michael Flatley tribute act for YouTube doesn’t mean they’ll sound the same. They do share characteristics that define the genre, yet there are definite categories:

Keep an ear out for the following instrumentation to see if a song has a Celtic flavor:

Fiddle and violin are the same instrument, but the difference lies in how it’s played. ‘Twould be a crime to attempt a succinct sentence describing the differences, however, and Strings Magazine has much to say on the topic.  For our purposes here, suffice it to say that the violin changes into a fiddle when used to supply rhythm and variations in simple melodies.

Or simply take a listen:

While a silver member of a symphony’s woodwind family may come to mind, that’s not the flute to listen for here. The Irish flute is a simple six-hole transverse flute, sometimes with a few keys slapped on here or there… but that doesn’t necessarily mean it’s simple to play:

After this song came out, the haunting sound of the tin whistle completed its conquest of Planet Earth:

The Irish drum, played with a double-headed stick, is considered the “heartbeat of Irish music.”:

It looks a little like an accordion, but the concertina has button-like keys and a different shape. Because of its smaller size, it also has a more limited range than a traditional accordion:

Like that tune? You can find sheet music for Cronin’s Hornpipe – and practically any other Celtic tune – at The Session.

The ancient folk instrument that became the national emblem of Ireland, the Celtic harp is smaller than the classical orchestra version and has a triangular shape:

This set of seven pipes – sort of the bagpipe version of organ pipes – are technically bagpipes but not the kind you’re thinking of. The Irish once had war pipes like the Scots, but they were banned by the British. So they adopted this contraption in which the bag under one arm is filled by the bellows under the other arm – no blowing required.

The Uilleann pipes are meant for seated, indoor playing (the opposite of Scotland’s traditional bagpipes) and are considered an extraordinarily difficult instrument to play:

Other places to hear Celtic music

Aside from your internet radio and apart from heading to your local pub, Thistle and Shamrock – one of NPR’s longest-running radio shows – offers an intriguing weekly set list featuring the wide span and varied nature of Celtic music and its subgenres.

You might not have to look any farther than your favorite popular band. While much of the North American and European traditional music that fed into current popular styles can claim Celtic roots, the international rise in the popularity of Celtic styles brings fresh new influence across the spectrum. Listen to these tracks and exercise your Celtic ears to pick out the tell-tale elements:

Once limited to the far western isles and coasts of Europe, the Celtic style has become truly global and pervasive in its influence. Now that you’ve identified the sounds and traits of this rich, ever-evolving tradition you’ll start to hear it everywhere. You may even add a jig or two to your own musical repertoire.