An Approach to Ear Training

Missed the first article in the series? Click here to start at the beginning.

In the following articles, we will explore individual topics in ear training in a little more depth. We will develop our study with what I hope is a clear system where each topic builds on the previous one.

With ear training, as with any discipline, it is useful to have a basic methodology or approach in building our skills. We are developing our relative pitch, the ability to discern the distance between notes. We can develop this skill to such a high degree, that we can accurately hear the quality of two or more notes as a kind of color: a major third, is not only bigger than a minor second, it has a different sound quality. Larger collections of notes also have their own sound qualities: a major triad sounds different than a minor one.

In order to discern different types of musical elements like intervals and chords, we need to be able to produce those elements. The first skill we should develop is simply that of matching pitch with our voice. Play the following example and sing back each pitch as you hear it. Its alright if you have to fish around a bit. Now when we are singing, its important for our egos to remember that we are developing our inner ear. The relative goodness or badness of our singing voice is not important. It is more important to simply learn how to match pitch:

Can you sing back each note?

Listen and Sing: Note by Note

Once we can master the above exercise, we are well on our way. The next skill we should develop is the ability to recognize and sing a major scale.

Since we are starting to sing back more than one note, we need a system to do so. Students typically learn one of three common systems: fixed do, movable do, or a number system. The number system will be familiar to American music students, while Canadian and European students usually use fixed or movable do. I will be using the movable do system here and in the articles that follow since it is the one I am most familiar with, but feel free to substitute another system if it is more familiar to you.

Movable do uses a series of syllables, or solfege, that are easy to sing and represent the different degrees of a major scale. Do always refers to the first scale degree, so to the fifth, as shown below in a C major scale:

Listen to the above scale, following along the notes and the solfege syllables. After a few listenings, sing along.

Once you are comfortable singing the above major scale, try listening to it once, then singing it back on your own.

We have begun to establish a system to ear training:

The third step is to sing the desired musical element given a starting pitch. Play a random note at your instrument, then sing a major scale starting on that pitch. Try two or three more scales using different pitches.

Our fourth step is to be able to identify a musical sound once we hear it. In the next example you will hear two different scales. Which one is the major scale?

Listen: Which is the major scale?

Pretty neat! You can identify a major scale among a group of other musical ideas.

The first scale in the above example was a natural minor one. As you heard, it has a different sound quality than the major scale. We should learn it the same way as we did the major scale:

We can also learn the other scales as well, and start to sing them both ascending and descending. The following example presents the main scales we should study along with their accompanying solfege: 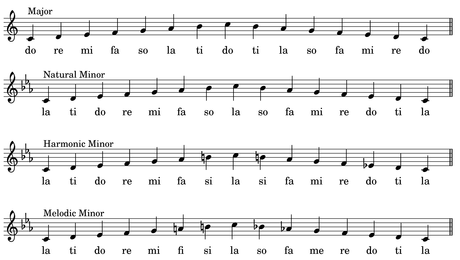 Listen and Sing: Each scale in turn

Notice how the solfege syllables are adjusted for accidentals. With sharps, the vowel sound changes to ‘is’: do becomes dis. With flats, the vowel changes to es: mi becomes mes.

If you want a great challenge you could learn to sing a chromatic scale ascending and descending. You will also learn all the solfege syllables:

The chromatic, using all solfege syllables (click to enlarge)

Listen and Sing: The chromatic

If the chromatic scale is a little too much for you right now, that’s fine. Focus on major and minor scales for now.

For example try this exercise: Give yourself a starting pitch and sing the first three scale degrees of a major scale: do re mi. Now sing the re silently: do (re) mi. Now just sing do to mi. You have just sung a major third! We can do the same for a minor third. Sing the first three scale degrees of a minor scale: la ti do. Now sing the ti silently: la (ti) do. And finally sing a minor third: la do. We will further develop this technique for ear training in our next article on intervals.

You can subscribe to our articles to make sure you don’t miss the next Pitch & Harmony lesson. Remember to take things at your own pace, and learn one thing at a time. If you have any questions please leave a comment below, or come ask in the Forums.