Learn Music Like You Learn A Language: Naturally! (Victor Wooten) 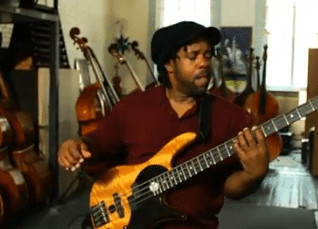 In this fantastic short video, Victor Wooten explains his philosophy on music as a language, and how organic learning music can be.

Doing ear training passively through exposure to music can develop aural skills in the same natural way as language.

This inspiring outlook and approach to music can be applied to ear training – not only for children, but for adults too!

The video comes from the TED-Ed project. TED stands for Technology, Entertainment and Design but now covers a much broader range of topics. TED is a non-profit organization established for the purpose of spreading ideas with the belief that ideas have the power to change attitudes, lives, and the world. As an extension of TED, TED-Ed presents video lessons produced by some of the world’s most talented educators and animators as a way of spreading and sharing ideas.

You may have heard of bassist Victor Wooten, who narrates and stars in the video. He’s an American bass player, composer, author, producer, teacher, naturalist, magician and acrobat and has won five Grammy Awards. Wooten began learning music at the age of two and played bass with his family band from the age of five. He originally gained worldwide acclaim as a founding member of the super-group Bela Fleck and the Flecktones. Wooten has been running special musical “Bass/Nature” Camps for 13 years and he has been invited to speak and teach at schools and universities around the world to share his experiences in music with others.

Here’s the video (transcript below):

Music is a language.

Both music and verbal languages serve the same purpose. They are both forms of expression.

They can be used as a way to communicate with others, they can be read and written, then can make you laugh or cry, think or question and can speak to one or many and both can definitely make you move.

Music works better than the spoken word because it doesn’t have to be understood to be effective.

In some instances, music works better than the spoken word because it doesn’t have to be understood to be effective. Although many musicians agree that music is a “language” it is rarely treated as such.

Many of us treat it as something that can only be learned by following a strict regiment under the tutelage of a skilled teacher. This approach has been followed for hundreds of years with proven success… but it takes a long time. Too long.

You were allowed to make mistakes.

You were a baby when you first started speaking and even though you spoke the language incorrectly you were allowed to make mistakes – and the more mistakes you made, the more your parents smiled!

Learning to speak was not something you were sent somewhere to do only a few times a week. The majority of people you spoke to were not beginners, they were already proficient speakers. Imagine your parents forcing to only speak to other babies until you were good enough to speak to them! You’d probably be an adult before you could carry on a proper conversation.

Proof of this can be seen in almost any family where a child grows up with other musicians in the family.

Here are a few keys to follow in learning or teaching music:

And most important: Remember that a language works the best when we have something interesting to say.

Many music teachers never find out what their students have to say. We only tell them what they are supposed to say.

A child speaks a language for years before they even learn the alphabet. Too many rules at the onset will actually slow them down.

In my eyes the approach to music should be the same.

After all, music is a language too.

Learning music in a natural way, just like learning to speak, is not only about increasing skill and proficiency but enjoying the process of learning.

This outlook is about developing as a musician rather than learning rules. That removes a lot of the pressure some music students experience, which diminishes their enjoyment of learning music.

By integrating this perspective into your own musical development you will continue to expand and grow – and enjoy your musical journey!