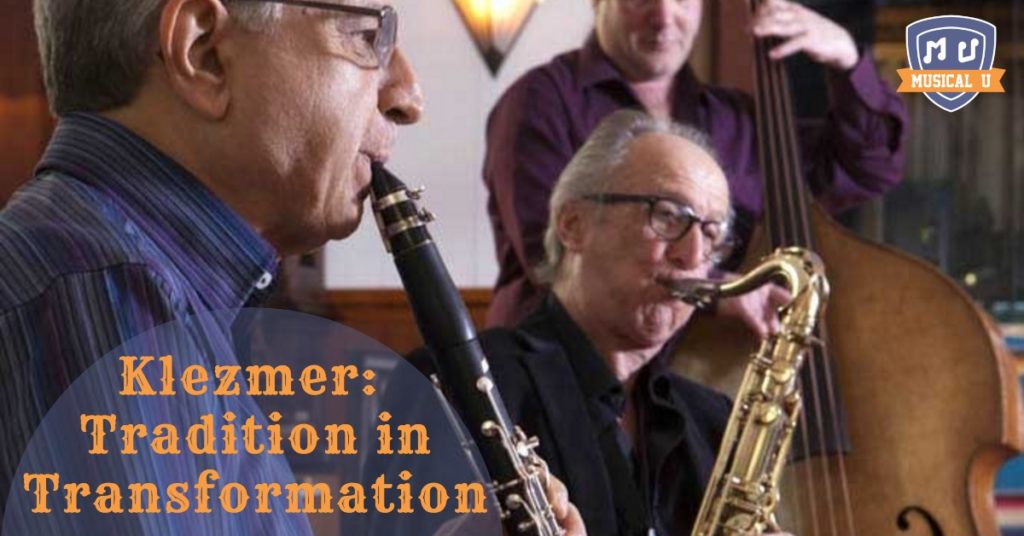 Like many forms of traditional music these days, the old Eastern European Jewish tradition of Klezmer is now transforming into a global tradition. Along the way it’s role in society is transforming as well – from a mostly dance-related tradition with specific social functions (especially at Jewish weddings) to an art music for concerts. This transformation raises questions about the very identity of the music and the musicians that play it.

Paul Green, a childhood classical clarinet phenom who grew listening to jazz, came from Jewish roots. He describes his background as, “… very non-religious… I always felt like I was missing something.” He didn’t begin to really learn about the Jewish religion until his law days at Yale, where he studied with the famous Hebraic scholar Judah Goldin.

After his law career, Paul returned to music. While he maintains his classical music, he also embraced the jazz music of his youth, and a decisive move towards his Jewish roots through Klezmer. Paul has become a highly sought-after klezmer performer and educator.

Paul spoke to us about the origins of Klezmer, its unique characteristics, and his own Klezmer Journey. In our final installment of this interview, Paul talked to us about the future of klezmer music:

Q: Welcome back to Musical U, Paul. Who listens to klezmer music these days? Obviously it has a social function. But how far does it go beyond that in the 21st century?

Oh yeah. The social function has moved to the background somewhat, even though there is still a little klezmer music played at weddings sometimes. But in the old days, in the 19th century, the klezmer music really ran through the whole process from the ceremony to the reception with different songs and different types of klezmer music fully integrated into the progression of the ceremony. The seating of the bride, the unveiling of the bride, the business with the in-laws, various dances at the reception, and so on and so forth.

Since the mid-20th century, in most Jewish weddings in the United States you might find a token part of the reception with some klezmer tunes. People dance in a big circle around the room, and then revert back to whatever is popular now. Jewish music would not be running through the whole wedding. Most of the time people don’t want that anymore.

I’ve not played in the Hasidic weddings so maybe they still do there, but mostly Klezmer’s purpose as a social function music has been much reduced. More and more, Klezmer is played for its own artistic merit. It’s becoming an art form.

It’s just like when Louis Armstrong converted jazz from an entertainment music into a high art form. Jazz started being played in concert halls. Benny Goodman did a famous 1938 Carnegie Hall jazz concert. It was a formal concert. Jazz became an art form that could compete with any other art form in one of the world’s major concert halls.

The same thing is happening with Klezmer, only it’s gotten a later start. These days Klezmer is played a lot on college campuses and concerts. It’s much more open to fusion and merging with other styles, just like jazz merged with Latin music and became Latin Jazz.

The Jewish music has always been characterized by assimilating other cultures and styles into it, so it stands in good stead in terms of developing into an art form.

Sure. That’s really interesting because I might have guessed that Klezmer-jazz fusion was about making klezmer relatable to the modern era. But actually klezmer music is alive and thriving and you’re ahead of the curve in taking it in this new direction.

Well, I’m really trying to explore my own inner artistic creativity, wherever that leads me. My Klezmer is music for its own sake, which is really the definition of art music, as opposed to music for a wedding or music for a dance. You know what I mean?

In the mid-20th century, my influences Dave Tarras and Naftule Brandwein played millions of weddings. That’s how they made their livings. Even though they became progenitors of the art form.

Q: If klezmer has detached somewhat or at least become a bit more independent of that social role, has it also detached from the Jewish people as a culture, or is it still firmly Jewish musicians who typically play klezmer music?

That’s a sociological question that I can’t fully answer. It’s certainly still a Jewish music. That’s why it was so important for me to play it. I was getting back to my roots. Perhaps the majority of klezmer players are Jewish, but there are several very prominent non-Jewish klezmer players. Our band Two Worlds is half-Jewish.

But it’s still got this Jewish identification and I don’t think that’s ever going to leave, because the melodic component is so important in klezmer music and that’s taken from Jewish music.

Thank you so much, Paul, for all you’ve taught us about this wonderful art form. We look forward to listening to more of your own Klezmer-Jazz fusion.

The Future of Klezmer is Now

As traditional social contexts for music change and disappear in our global musical communities, traditional music becomes a personal rather than collective journey. Paul Green’s music lovingly reflects his personal journey into Klezmer, jazz, and classical music, which he generously shares with us in his beautiful lectures, concerts, and recordings.

Where does traditional music fit into your expression? Are you drawn to Klezmer, Celtic, Cumbia, or other musical traditions? Take your inspiration from Paul Green and open yourself to exploring roots music. As you take the journey, you’ll be amazed at the beauty you find within yourself.