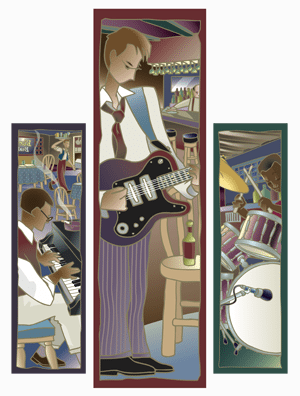 An appreciation of common musical genres in important for any musician, and guitarists in particular are often called on to provide accompaniment in a specific style at the drop of a hat. Today we’re going to look at jazz guitar ‘giveaways’: musical elements that characterise jazz, which you can use to recognise it – and jazz up your own playing!

Jazz guitar is somewhat atypical compared to most other guitar styles. It emphasizes pure technical ability less than rock and metal guitar do, but emphasizes music theory more. Perhaps this is because the jazz guitar style, at least in its basic form, developed before those other guitar techniques started to become popular. Not every jazz guitarist exactly follows the conventions of the genre. They commonly hybridize the jazz style with other genres, or use unusual aspects of music theory in their playing. Still, there are some aspects of jazz playing which set it apart from most other genres. We’ll look specifically at Seventh Chords and Bebop Scales.

The presence of seventh chords, particularly the dominant seventh, is one of the best indicators of a jazz song. There are a few reasons for this. The first is that seventh chords are extremely common in jazz chord progressions. In fact, many jazz songs use seventh chords exclusively in the chord progression. Another reason is that other modern styles of music rarely use any type of seventh chord. They do crop up in Classical, Baroque, and Renaissance music, but it does not take any real amount of ear training to distinguish between those styles and jazz! In addition, those styles more typically use the arpeggio, as opposed to jazz which uses the full chord.

The following example contains several types of seventh chord. Compare the tone of these chords against the major and minor chords. Differentiating the seventh chords is not that difficult once you know what to listen for.

The most common types of seventh chords. Compare them with the major and minor chords.

The most common types of seventh chords

The following examples are all the same chord progression, but using different types of chords. Version C, using the seventh chords, is the most typical of jazz music. In some rare cases, a jazz player might use basic major and minor chords instead (like in Version A). You would not typically find the power chord example (Version B) in jazz music!

Jazz guitarists tend to have very strong backgrounds in music theory, so it is not surprising that they use diverse scales and modes. But you cannot use the simple presence of many scales and modes to identify the jazz genre. The major scale and its modes are common in jazz, as they are in most other styles of music. Jazz musicians even use scales normally associated with other genres. One normally associates the minor pentatonic scale, for example, with rock and blues guitar, but Herbie Hancock and Art Tatum (both jazz pianists) are well known for using that particular scale.

Listening for a bebop scale, however, can be a good way to detemine whether a song is jazz or not. The bebop scales are modified versions of other scales and modes. Each one has an added chromatic passing tone. Practically no genre other than jazz uses these scales, which makes them a useful method of identification.

We’ll use the key of A for the examples below. Remember that the regular A major scale would be A, B, C#, D, E, F# and G#. The added notes in each of the three bebop scales below are shown with an asterisk (*).

The bebop dominant scale is the Mixolydian mode with a chromatic passing tone between the seventh and root notes:

Listen to the Bebop Dominant Scale

Listen to the Bebop Dominant Scale

The bebop dorian scale is the Dorian mode with a passing tone between the third and fourth notes:

Listen to the Bebop Dorian Scale

Listen to the Bebop Dorian Scale

The bebop major scale is the major scale (Ionian mode) with a passing tone between the fifth and sixth notes:

Listen to the Bebop Major Scale

Listen to the Bebop Major Scale

It is easy to hear whether a song is jazz or not if it has seventh chords or bebop scales, but you will not find these in every jazz song. Any musical genre develops from numerous factors, many of which you can find just as often in other genres. A jazz guitarist could use the same scale and chord progression as a pop musician, and still end up with something that sounds distinctly jazz rather than pop. This is not because there is any single thing about jazz as a genre that is wholly unique to it, but rather the identity lies in the overall presentation of music concepts.

Listening for seventh chords or bebop scales does allow you to identify the vast majority of jazz songs – but not every one. Unfortunately there is no easy trick for recognising jazz songs that do not feature these identifiers. Usage of seventh chords and bebop scales happens to be very specific to jazz. Other musical qualities, chords, scales, and modes that jazz musicians use occur too commonly in other genres for them to really be useful as markers by themselves. In combination, however, they contribute to that overall “jazzy” quality to music, and appreciation of that is something one develops through experience and with conscious ear training.

Listening to jazz musicians is a natural way to develop this kind of aural skill, but playing jazz is even more effective. Playing music allows you to more easily associate the sound of the music with the mental and tactile aspects of playing an instrument. This reinforces the associations you develop through ear training much more significantly than through sound alone. For example, hearing a bebop scale in a song will build your ear for recognizing jazz, but not as quickly or effectively as using that scale in a song yourself will. In both cases you hear the same thing, but playing it associates the mental experience of hearing a bebop scale with the physical experience of playing that scale to the sound.

Now you know the two main elements for identifying jazz guitar in music: Seventh Chords, and Bebop Scales. They may not be foolproof, but they’re powerful hints that a song or guitar part is jazzy. Try using both in your own playing, and make sure you listen out for them in music.

Have you noticed other useful markers of the jazz style? What contributes to that overall ‘jazzy’ sound? Let us know by leaving a comment below!