Why? We’ll get to that shortly. First, there are some obvious questions. What is the definition of frequency? That leads to why exactly do you need recognition skills? That ultimately leads to the overarching theme of this discussion; how do you train your ears to recognize the individual sonic fingerprints of each sound? Or, to be more precise; what exact mechanisms, or exercises do you need to develop and practice?

The practice of ear training is not relegated solely to musicians, but to anyone working in the “audio” field. Specifically, we will focus on music/recording engineers, producers, and so forth.

A lot of the beginning material will undoubtedly be familiar to seasoned professionals.

To you; be patient. Use this as a refresher.

To the audio professional just starting on the journey; we will leave nothing to assumption. Your basics will be covered.

What is a frequency?

Frequency, in its most pragmatic definition, is the exact number of times the waves of a particular sound move through the air per second. The actual dictionary definition is this: the number of complete oscillations per second of energy (as sound or electromagnetic radiation) in the form of waves. For our purposes, we will be using musical sound waves as our staple.

Now, here’s a little talk about the human hearing range. The lowest frequency sound a human can hear is 20Hz, or 20 cycles per second. Any lower, or slower, the ear simply cannot hear it. The highest frequency the human ear can hear is 20,000Hz (or abbreviated ’20kHz’, which is 20,000 cycles per second. Any higher, or faster, again, the human ear cannot hear it. Dogs? That’s another story.
(Side note: Sound above and below the human hearing range can still have an effect on the human body… but that’s another discussion altogether!)

Sound…any sound actually, travels through the air in said waves. Repetitive waves (or cycles). Anyway, one complete cycle that travels in one second is 1 Hertz (abbr. Hz).

So, what is this Hertz business? Hertz is the unit of measurement used to identify frequency. Once again, 1 cycle per 1 second equals 1 Hertz. This unit is named after German physicist Heinrich R. Hertz.

The next logical point or conclusion one need come to is this: Obviously with the near infinite sounds present in our world, there are bound to be an enormous amount of these sounds that overlap with each other; frequency-wise that is. For instance, our low E guitar string is 82.41Hz. What about the E2 key on a piano? 82.41Hz. How about a jackhammer that has a frequency of 116.54Hz? That would be A#2 on a piano or the same note on guitar. (6th fret low E string) See the pattern?

Any sound can have the same pitch or frequency of another unrelated sound.

Now the actual makeup and sonic elements that go into constructing different sounds is beyond our scope here; In other words why does bird song sound the way it does, or why does a clap of thunder sound the way it does?
At this point we’re talking about harmonics, overtones, relation and proportion to each other, and a whole other group of sonic recipes. The physics of sound is another game altogether.) For now, let’s just worry about frequency!

Incidentally, this leads us into another brief point. Musicians refer to the notes they play as “pitch” or “pitches”. They use letter names such as, C, Ab, G#, F, Db, and so forth. For studio/recording engineers and the like, it’s the frequency or Hz that is used to identify the exact same sounds/tones/etc. Six in one hand, half a dozen in the other.

In regard to frequency and pitch, you really can say that “all roads lead to Rome”.
An example: An Ami7 chord is spelled with the four notes, A, C, E, G. That would be how a musician would spell that chord. A studio/recording/mastering engineer would identify and spell that same chord like this: 110.0Hz, 130.81Hz, 164.81Hz, and 196.00Hz.

Here’s the explanation. Musicians don’t always play chords or notes in the same octave region. They displace the grouping of notes throughout different octaves. So, all three frequency lines spell Ami7. It’s just that each note is in a different octave. It’s whatever the musician chooses at the time, for their particular musical reason. The combinations are endless. Take your time; you will see a simple pattern. Any frequency that you double, you just found that exact note one octave higher.

You don’t have to memorize all of these frequencies at once.

The first basic mechanism to train your ear will be simple repetition/recollection. Memorize a frequency until someone can quiz you and you can identify it. Simple….this is where you need to begin. (Put those iPods to work…play this stuff over and over. You’ll start recalling these frequencies one by one…you’ll see!)

Baby steps first. Learn and memorize the following before even thinking of moving on to more complex sounds (compound frequencies, multiple sounds, etc.)

MEMORIZE THESE “MUST KNOW” FREQUENCIES (SOUND AND CORRESPONDING FREQUENCY NUMBER)

Memorize, and be able to recall and identify by sound and corresponding frequency these tones first. Very few at first…..only E’s and A’s.
A training partner is highly recommended for quizzing each other.

NOTE: Learning to “pick out” notes AND frequencies can be rather frustrating at first, since you haven’t yet build up a source of reference. As they say; the first step is always the most difficult. So, don’t be discouraged… as a matter of fact, start with one note: The E2, 82.41Hz. (Hint: Piano is a great place to start.)
[For more on learning a single note, see Sabrina’s post on learning a reference pitch]

Play it over, and over, and over until your brain finally logs it, and you can identify it. Your hearing, just like your other senses, learns by repetition and rote.

A good example would be food. If you sample a particular dish only once in your entire lifetime…you probably won’t remember what it tastes like. But if you continue to eat that dish consistently, not only will you be able to recall that flavor at will within your mind…BUT…you will also be able to mentally recall the small discrepancies (ahh, that crème brûlée was a little richer at so and so’s, as opposed to that small café in Paris!)

Things like that, we take for granted….but that’s exactly the mechanism your mind uses to not only catalog information, BUT, to actually store intimate knowledge of it. 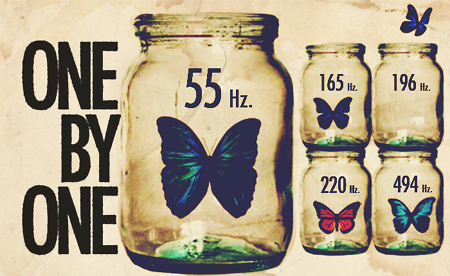 Remember:
Repetition and rote. One note at a time. Do NOT move on until anyone can play an E2 for you, and you can automatically identify it. (Your quiz partner should throw in E3’s, E4’s, and maybe even a couple of other octave E’s…E1’s, E5’s etc. etc. in an attempt to throw you off. Only when you can identify that E2 among other octave E’s, should you move on.) Also, leave all simultaneous sounds alone (even though they’re octaves) until you have mastered ALL the single notes given below. Then by all means play that 3 octave E and see now how well you can hear each distinct E!

Time consuming at first? Yes. But, it will get easier and faster. I promise.

Use the same steps as described above for the following:

Technically as an audio pro, you only need to memorize twelve numbers – the twelve tones used in western music. Then you can double, or halve each number to find your desired octave.

Here are the twelve frequencies starting on the A4 on a piano.

Track 4 – The twelve frequencies to learn (+ one extra!)

Notes:
1. A4 (A440) is the standard reference point for concert tuning.
13. Start over for the next octave, with twice the frequency.

Extra credit – once you’ve mastered that octave, work on the two below:
Same 12 notes 1 octave lower…simply halve the frequencies:

And once again, same 12 notes yet another octave lower. Halve the numbers again:

(Needless to say…the same approach as above… one at a time!)

Memorize the guitar and bass frequencies below. They are both only 3 octaves of E’s and A’s. Exact same as with the piano above. Absurdly simple? Yes, but remember theses are anchor (reference) tones, AND to get you used to a different sound yet the same frequency.

Side note: These frequencies ARE NOT the be all, end all of sound. Numerous sounds exist between tones (called microtones….musical instruments in the far east make use of micro tonal music, in which the subdivisions get smaller and smaller. Same with any sound….not all exist in the given parameters. Once again that’s a discussion for another time. But for now, this is more than enough to start ear training.

Final note: When you’re being quizzed on these different pitches, keep them all within their own notes. (i.e. E’s with different octave E’s, A’s with different octave A’s and so on.) ONLY, when you feel you have mastered all of the above in nice, neat, tiny packages should you attempt to jumble it all up and have your quiz partner play an assorted mix for you while you try to identify a C4 for instance. (Or whatever other frequency you’re trying to pick out.)

Everything else you can figure out with simple divide by 2, or multiply by 2.

Now that you have a basic foundation, ask yourself, “How will this all serve me in the studio, or production environment?”

The long and short of it is this:

Your ear will be able to recognize frequencies that overlap with other similar sounds, which can become very clustered and muddy in the mix. There is only a certain amount of sonic real estate.If all frequencies are competing for said space? Enough said!

You will be able to make suggestions to the musicians you work with. Maybe the guitar part could be displaced in a different octave, or maybe that piano could be spread out into multiple octaves, so as to not compete with the vocal. The human voice is among the most complex sounds known. In short, vocals require a lot of sonic real estate. Here, it becomes crucial to know your Hz.

Sadly, too many producers and engineers are not as prepared as they should. When they start hearing cluttered mixes, especially with intricate music, they simply dismiss it as a by product of overly zealous musicians trying to stomp all over each other. Doubly sad, (and there are countless stories) producers will force the musicians to water down and simplify the music in order to “clean” up the sonic picture; all the while being ignorant to the fact that the “fix” they sought after was as simple as simply spreading out the sounds and instruments! That is, IF, they knew their frequencies.

“Hey, I’m not a musician, I don’t need to know all that….” is NOT, nor will ever be an acceptable excuse. If anything, it is precisely the knowledge of frequencies that will ensure your success as an audio pro. Everything revolves around frequencies. Everything!

This is the first post in our new series on Frequency Training! If you have any questions or need help, just give a shout below or in the forums. Or if there are some audio pros out there with tips to share – don’t be shy!