Home » How To » Improvisation » Improve Your Improv: Listen to the Rhythm Section, with Stefan Hall

Improve Your Improv: Listen to the Rhythm Section, with Stefan Hall 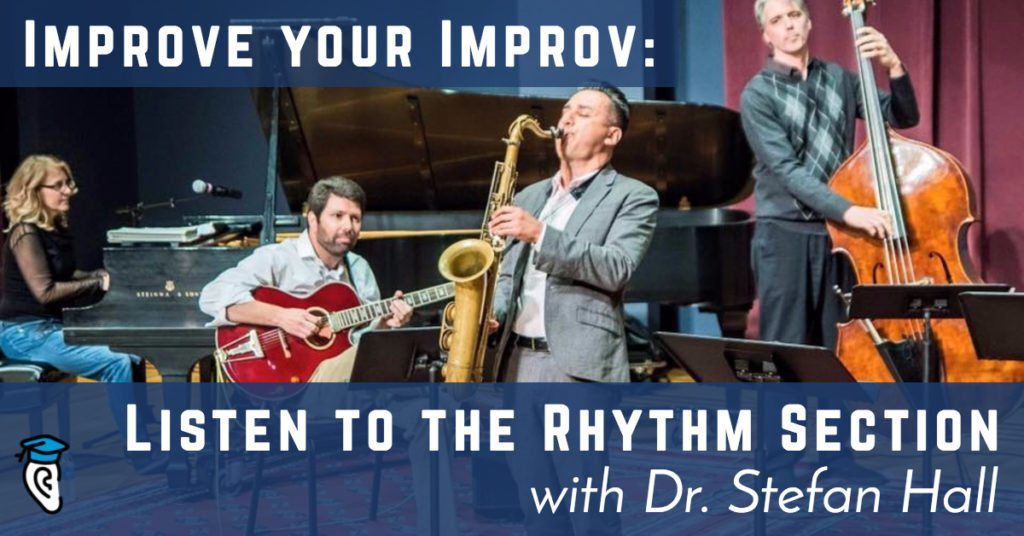 Guitarist Dr. Stefan Hall teaches and performs jazz. In previous installments of this interview, he shared his life in music and how he taught himself to play guitar by playing along with recordings. He then refined this play-along method and brought it to his students. In his teaching, he combines deep listening with the physical fretboard experience of modes and chords.

In this installment, Stefan shows us how to study and listen to the jazz rhythm section – bass, piano, guitar, and drums – to connect with the inner structure of jazz.

Q: Greetings Stefan! Welcome back to Easy Ear Training. We’ve so enjoyed hearing about your jazz learning and teaching methods. Let’s talk about how jazz improvisors know what to play. As a newbie to jazz, I’m learning that improvisation is just not a free for all. How does structure come into play?

Q: What is the foundational structure for jazz improvisation?

Jazz improvisation is based on the harmonic progression throughout the form of the piece. 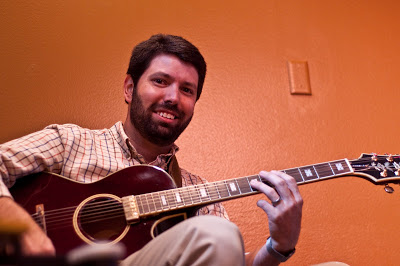 Basically there’s only three kinds of chords that a guitar player is going to have to worry about. If they’ve learned the basic forms of those chords they have options for each one of those three.

Q: Ok. So let’s say I know my chords, and I want to improvise a jazz solo. I keep myself from getting lost by humming the melody in my head. How do you help your students keep track of where they are in the form?

There are all sorts of exercises that you could do in this way. Take a chord chart from a jazz standard and play, sing – or hear in your head – the root note of each chord, for as long it lasts in the progression, throughout the song form.

Q: It sounds like a simple exercise, but one that would take some ear training and concentration. What are some other sticking points that your students bring to you and how do you get them unstuck? 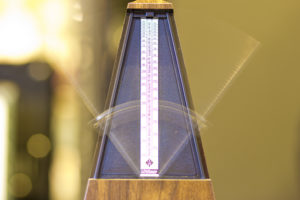 When younger guitar players are trying to learn to improvise, they get a little bit overwhelmed with tempo, just keeping up. They tend to slow down but they also tend to not realize that jazz doesn’t stop. That they may really like this one particular section and they want to keep playing that scale – but then jazz moves on.

You’re in the B section and they’re still thinking, “I really like this other … ” It’s keeping up with the form as it moves, the song as it moves. You can’t just do that by looking at the sheet – you have to be able to hear the form.

If you’ve been doing the ear training that I’ve had them do by listening to the CDs and playing along with it, you can hear the form, you start to hear, “Oh, they’ve gone to the B section.”

They don’t realize that they actually have to think ahead a little bit, they have to hear, “Oh, I’m coming to the end of the second A, we’re getting ready to go to the B section.”

You have to know really where the harmony is going. 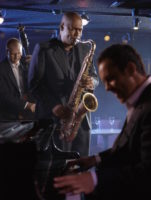 You do. How do you know that if you’re isolated in your own little world with your nose in a chart? You have to listen to the piano player or the bass player or whoever in the group is also suggesting the harmonic movement.
Guitar students are more likely to be grounded in the harmonic structure of a song, because that’s part of our job. You will get horn players who don’t really sound like they’re playing the form or the changes. They’re just playing a whole bunch of notes.

Then, as a guitar player or a piano player or a bass player, you really have to listen to the other members of the rhythm section because that’s the unit that has to pay attention to the form.

Of course, those horn players sound a whole lot better when they’re listening to us too.

Q: Listening to the rhythm section?

Yeah. Listen to the piano player and perhaps just play chords, just practice rhythm guitar for the whole time, along with the piano player. Take McCoy Tyner in John Coltrane’s band. I actually spent time just listening to what he was doing with his left hand only – his right hand was way too fast for me.

He was doing a bunch of those cool triplet things with his right hand. But his left hand was where the modal chord ideas that have really informed how I play guitar now came from. If you look on the page, Coltrane’s “Love Supreme” is a really simple song – but if you listen to what McCoy Tyner is doing with his left hand, it’s not just A minor – it’ll be B minor 11 over an A minor. It just continues on like this.

I learned so much from that.

Q: Would you listen to the same CD over and over again and isolate different instruments?

Yes. You listen to the bass player, you get all sorts of ideas. Listen to drummers. Say I listen to Elvin Jones really closely just to hear him … One of the modern drummers that I really like is Bill Stewart. He’s released a two or three CDs of his own. He played with John Scofield the guitar player, he’s played with Larry Goldings the organ player.

I got to meet him – he was the nicest guy ever and he is a crazy intricate drummer and being able to hear such complex rhythms… You’re playing a song in 4/4 and it doesn’t have to just be one, two, three, four, ding. It can be three over four, he can put five over four, he can put all kinds of polyrhythmic structures into a song without losing the pulse.

Q: Beautiful! As a guitar player, what do you do with that?

That’s really useful when you’re playing in a modern jazz ensemble. When you’re playing say an original composition- which often times will just be a melody and a chord chart – you have ideas to bring to the piece.

Then the composer and the musicians that you’re playing with think, “Oh wow, I hadn’t actually heard that when I was composing this.” Or if you’re playing with someone like Anibal Rojas and he says, “What I want is such-and-such feel in this section.” Then you know, “Oh yeah.” Because I’ve listened to Bill Stewart and Elvin Jones I know what he’s talking about there.

Q: Terrific Stefan. Arriving at the gig or rehearsal with something to offer. That speaks to the heart of what if means to play music with other people. Otherwise, you may as well stay home! Thank you so much for speaking with us today.

We are so grateful for Stefan and all the learning, playing, performing, and teaching experience he has shared with us here on Easy Ear Training. Be sure to check out the other parts of this interview and help yourself to more of Dr. Hall’s treasure trove of musical wisdom.