2 Ways to Accelerate Your Jazz Learning, with Dr. Stefan Hall 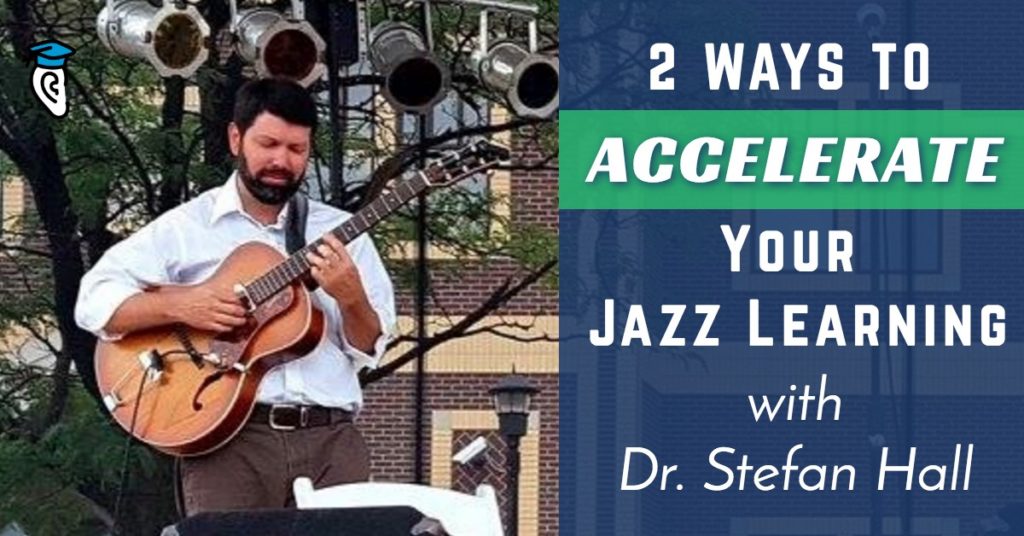 Stefan Hall has always sought to draw learning from his experience. Accordingly, he taught himself to play guitar by jamming with recordings, and has since refined this play-along method and brought it to his students. Let’s see what happens when he combines the deep listening experience with the physical fretboard experience of modes and chords.

Q: Greetings Stefan, and welcome back to Easy Ear Training. Last time we spoke, you described your method of learning and teaching jazz by playing along with recordings. How does music theory fit in? Ultimately what I teach is quite heavily theoretical. But one of the first assignments I give them is to actually just start listening to jazz. I teach a lot of guitar players at the university who want to play jazz because they’ve heard one or two pieces, or because they’ve been forced to play in a jazz ensemble and it sounded pretty good—but they’ve never even listened to any jazz.

If all you’ve listened to is funk and rock it’s a major transition: there are different rhythms, different phrasings.

Jazz has a different vocabulary. That’s where the music theory comes in.

You’re not just going to be able to play power chords. You have to play all these complex jazz chords. We start with a handful of the main jazz chord forms. With guitar, once you learn one jazz chord, you can reposition the pattern on the fretboard and now you’ve actually learned eleven main jazz chords.

Then we analyze the charts and talk about the experience. When they have a sticking point, when they say, “Well this section was really hard. I don’t know what to play with this”—that’s the teaching moment.

That’s where I can go in and say, “Well, you know your modes: this is a ii–V–I. You could play this mode over that entire section and it sounds pretty good.” Then we can start tweaking it as they get more and more advanced.

Q: Where do modes come in?

Modes are my starting point for improvisation. We begin with the major scale broken down into the modes. I have them memorize the scales and if I say, “Dorian mode or second position,” I want them to be able to route that off across the fretboard.

Visually, we break down the fretboard into various blocks called modes, various positions. The little black dots graphed out on the fretboard show the possibilities of where the notes are for the major scale or in a particular mode. Then they can play solos or improvise over a chord progression without hitting too many wrong notes.

Q: Can you give us some examples?

The major chord is either your Ionian (major scale) position, or your subdominant—the fourth position Lydian mode. You try one of those two scales over any major chord and you see it’ll probably work.

If it’s a minor chord, you have options. Whenever you see that A minor chord you can plug in the second position Dorian mode, and it’s probably going to sound pretty good. There’s also the natural minor, which is the Aeolian mode, the sixth position. The same thing could be said for the dominant, fifth position: it’s your dominant, that’s your Mixolydian mode, you could play that.

These are your modes. There’s only seven of them, maybe just six that we use generally. Of course there are more scales, but these six cover a whole lot of ground.

Then with these simple principles we can go after even the most sophisticated jazz harmonies. Dominant chords in jazz get often much more complicated than just your standard I–IV–V blues type of dominant chord where a pentatonic scale will sound good over the whole thing.

Jazz dominant chords often have flat fives or flat nines or sharp fives or sharp nines—they have all sorts of altered terms. This is the complexity of jazz: what do you play if you start altering tones on the dominant chord? You don’t just play the standard major scale fifth position Mixolydian mode because those notes won’t necessarily sound as good with this altered dominant chord. So if you’ve learned the modes and the position then I could say, “Well from that root you can just play a G Phrygian.” They play it their eyes open and they’re like, “Oh wow, how did you arrive at that?” Again, the teachable moment. I can teach about the intervallic relationships between the modes.

Wow, thanks for taking me on that mini-trip through jazz theory, Stefan. Working with modes like that takes the mystery out of those crazy looking jazz chords. Your students keep building on what they already know, which must instill a lot of confidence.

As in children learning to talk,

combine to become an irresistible force of learning.

Try these simple steps for yourself, and soon you will find that the complex mysteries of music are within your grasp. Join us next time when we talk to Stefan about form and structure in jazz improvisation.