Home » Instruments » Percussion » A Roll Around The Drum Kit

A Roll Around The Drum Kit 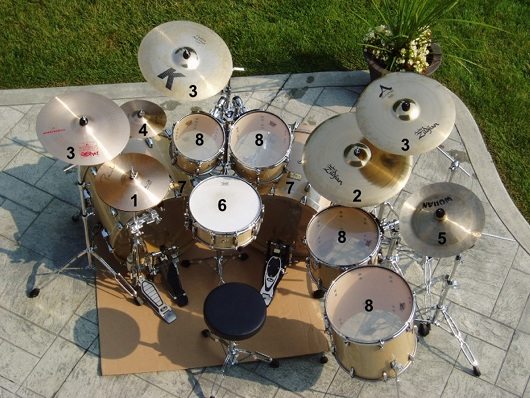 A great drum groove is the foundation of popular music, but a surprising number of music lovers can’t tell a snare from a hi-hat. There are a number of articles coming up here on EasyEarTraining.com featuring drums so now seems as good a time as any to take a quick tour around the kit.

Being able to identify parts of a drum kit doesn’t just improve your appreciation of music, it’s also a great skill to have at your disposal when songwriting, allowing you to explain your ideas to your drummer or program a groove into a drum machine with something better than trial and error.

Hopefully by the end of this article you should be able to name all the common parts of a drum kit by sight and by sound.

Lets start by taking a look around a typical rock kit: 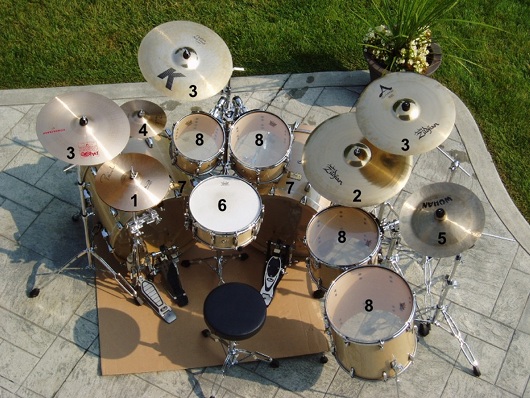 It may look pretty complicated, but we can soon break it down. 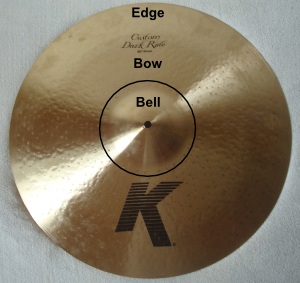 Parts of a cymbal

Cymbals are hammered and lathed from bronze. They consist of two parts – a central raised cup called the bell and the main body of the cymbal called the bow. Cymbals fulfil two main functions: riding (A steady, typically 8th-note, beat defining the pulse) and accenting.

Cymbals vary a huge amount in sound depending on their exact composition, shape and manufacture technique. Careful selection of cymbals has a much larger impact on music’s sound than drums (where tuning is more important). In general jazz players favour darker sounding cymbals with irregular hammering patterns to produce complex overtones while rock and metal players favour clean, bright sounding cymbals to cut through distorted guitars.

The hi-hat (1) is the most versatile cymbal in a drummer’s arsenal. It consists of two cymbals of around 14″ in diameter which can be clashed together using a pedal-operated clutch. The hi-hat evolved by taking the low-hat (a pedal driven device used to bring two orchestral clash cymbals together) and modifying it to raise the cymbals to a playable height.

The pedal can be used to splash the cymbals, or for a tight sound:

Relaxing the pedal so the hats sizzle and clash gives an aggressive sound for quarter-note rock riding and accents.

Hi-hat playing can be very expressive. Funk/disco grooves often feature the characteristic “shh” sound of the hi-hat pedal opening and closing to the beat heard here with the bass drum.

The ride cymbal (2) is usually the largest and heaviest cymbal (typically between 18″-22″ in diameter). As its name suggests it is almost exclusively used for ride patterns. The ride cymbal produces a “ping” at stick contact followed by a wash of sound. A drummer will typically switch to the ride in a chorus to fill out the sound.

Striking the bell turns the “ping” to a “clang”, reducing the wash and is commonly used for accenting and quarter note ride patterns in hard rock.

Riding the edge of the cymbal is known as crash riding and removes most of the “ping” for an expansive wash, which may be overwhelming in all but a hard rock chorus or jazz break.

Crash (3) and Splash (4) cymbals are principally used for accenting. The only difference between splash, crash and ride is size, with a splash typically 8″-12″ and crash 14″-20″ (indeed the renowned rock drummers John Bonham and Taylor Hawkins both used light rides as crash cymbals). Unlike the ride and hi-hat, drummers often have multiple crashes for different tones and strength of accent.

In drum patterns the crash is almost always played in conjunction with the bass drum to reinforce the sound. The splash is used for subtler accents without the bass drum and is not used by all drummers.

The China or Pang (5) is a harsh, trashy-sounding cymbal with a flared rim which produces a huge explosion of sound. It is used for strong accents and occasionally used as a ride for extreme metal styles.

Drums are made of a wood or metal shell with a taught skin (in reality made of Mylar, as real skin is a difficult to tune) stretched over each end. The top or batter head is struck with a stick and the bottom or resonant head vibrates in sympathy. The pitch of the note produced is determined by the tension of the head and the size of the drum (A larger drum will create a lower tone).

Something that often surprises non-drummers is that there is no one right way to tune a drum. It’s a very personal thing and an expertly-tuned beginners kit will outshine a lazily-tuned professional kit. Rock drummers will typically use large drums slackened to the lowest pitch before becoming deadened while jazz drummers favour smaller sizes and a tighter, more tonal tuning. 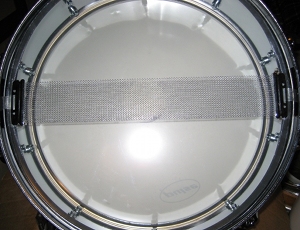 The wires of a snare drum

The Snare Drum (6) is typically 14″ in diameter and has tight metal wires or snares on the resonant head which slap back against the skin when struck producing a whip crack sound. The snare drum sits between the drummers knees. In a rock pattern the snare provides the all important back beat on beats 2 and 4.

The snare can be struck so the stick contacts the rim as well as the skin for a rim shot a popular jazz accent:

Laying the stick on the head and dropping it onto the rim produces a click called a sidestick, great for reggae:

The snare is the most versatile and expressive drum. Listen to how these subtle off beat ‘ghost’ notes combine with the hi-hat to add colour to this groove:

The bass or kick drum (7) is the largest and deepest drum. It is played with a felt beater attached to a pedal. The bass drum provides the thump that punches you in the gut on the 1 and 3 of a rock beat. The bass drum is usually heavily muffled with pillows or blankets to make it sound punchy:

Tom Toms (8) are come in a variety of sizes. Kits usually have two or three, but may have as many as ten! Smaller toms from 8″-13″ are called rack toms and are suspended from stands:

Larger and deeper toms from 14″-18″ are called floors and produce a much lower tone:

If you listen carefully you can sometimes hear a pitch bend on the decay of the note. This occurs when the two heads are tuned differently. (Listen to the verse groove of “Song 2” by Blur for a great example of this).

Toms are occasionally used for ride pattens, but mostly for fills where they are usually played from high to low along with the snare drum.

Putting It All Together

We have listened to the separate components of a drum kit, but the fun part is using what we have learned to get more enjoyment from great drum grooves.

Try listening to this drum instrumental which uses all of the kit and see if you can use your new skills to identify the sounds you hear.

We have only really scratched the surface of what a drum kit can be and the sounds it can produce. See what parts you can identify from this massive kit belonging to Frank Zappa drummer Terry Bozzio: 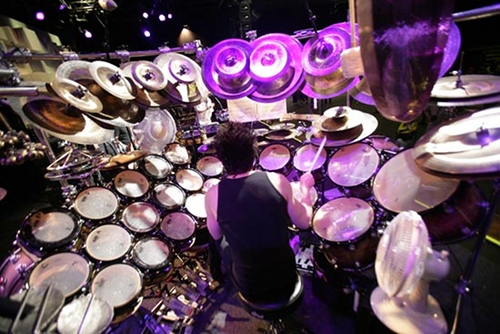 Nick will be continuing with more great articles and lessons on rhythm and percussion. Remember, if you have any questions, or tips to share – our Forums are always open!