How to Hear Chord Inversions Learning to hear different triad types and their inversions is not really that difficult, it just takes a little time and understanding. There are no shortage of different approaches to developing this important skill, including various solfege systems and other mnemonic devices. When we learn these different methodologies, we should keep in mind that the end goal is to be able to recognize a chord’s quality and inversion not unlike you would any other musical sound like a major or minor scale. This skill is analogous to the way we recognize colors or words.

Consider the word dog. We do not have to necessarily read every letter, and think about its phonetic make-up to understand this word in the context of a sentence. But what about a word like: perspicuous? We may have to take a second to sound out the word, and maybe even consult a dictionary before its meaning and context becomes clear – at least I did!

Learning to recognize musical sounds like chords is similar. We may hear a piece of music and simply recognize, for example, that it is in a major key not a minor one. But perhaps a particular chord in the music takes a few moments to work out its quality and inversion.

We can figure out a chord quality and its inversion using our understanding of basic chord types andintervals.

This article focuses on using our knowledge of the sound of major and minor triads in root position and its interval make-up to tease out the sound of different inversions of these basic chords. As with any approach, consider this one as a tool to use while you learn the different sound qualities of these sonorities.

You may recall that basic triads are made up of three pitches stacked in thirds from a root note. For example, a C chord is made up of the pitches C-E-G.

The above root position triad has a quality to it. We call it a “major” triad by definition: the interval from the root note to its third is a major third, and from the root note to the fifth is a perfect fifth. Musicians sometimes describe the sound of a major triad as being clear and bright, owing to the quality of its third.

The sound of a major triad also has a sense of stability to it. This stability is in part owed to the sound quality of perfect fifth above the root note. Compare a perfect fifth to a diminished fifth: 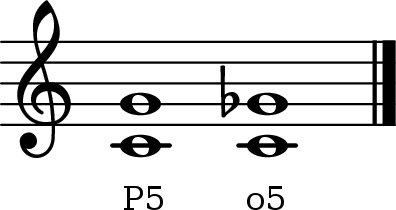 Compare the sounds of a perfect and a diminished fifth

Sounds of a Perfect and a Diminished Fifth

The diminished fifth is dissonant in comparison, having the quality of instability.

For more on using consonance and dissonance to help you recognise intervals, you can read my previous article on the topic.

Listen to the following root position major triads, pausing the audio after each one. Take the time to consider the sound quality of the chord. Try to hear each of the three pitches from lowest to highest. In the example, each solid chord is followed by its arpeggiated version to help you get started.

- Listen to the sound quality of major triads

The Quality of Major Triads

Now lets take a peek at the root position “minor” triad. We will use a C minor triad as our model:

Many musicians describe the quality of a minor triad as having a darker or softer quality than that of a major triad. We can notice that this quality is owed the minor third of the chord, which is a semitone smaller than the third of the major triad. Nevertheless our C minor triad, root position, still has a sense of stability to it, once again owed in part to the perfect fifth above the root.

Lets compare root-position major and minor triads side-by-side. The example highlights the difference in size of the thirds: think of the major triad’s third as larger than the minor one’s.

Listen to the sounds of major and minor triads

Listen to the sounds of major and minor triads

An inversion of a chord has a pitch other than its root-note as the lowest one. In first inversion, the third of the chord is the lowest pitch: 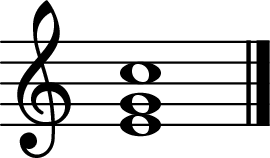 Compare a root-position triad and a first inversion one built on the same pitch. In the example below we will build them on E.

Listen to the following examples that compare a root position triad with a first inversion one. We can ignore for a moment that the two triads are of different qualities. What we are more interested in right now is the difference in the size of the interval from the lowest note to its higher one. The root position triad has a fifth, while the first inversion triad has the larger sixth.

Both major and minor triads in first inversion have this sixth between their lowest and highest pitches. Nevertheless they retain their basic sound quality, their relative major-ness or minor-ness, so to speak. But there is something different about their quality compared with the root position chord. They have a sweeter quality to them, or perhaps a mild sense of instability. That sixth does something to the chord’s basic sound.

Listen to the following major first inversion triads. Focus in on the quality of the chord. The brightness of the major triad is still present, while the sixth adds a different dimension to its sound.

Now let’s listen to a series of first inversion minor triads. The example once again highlights the sixth between the lowest pitch and the highest one. Notice how the minor, darker quality of the chord is retained, yet the inversion gives it its own flavor.

In second inversion triads the fifth of the chord is in the lowest position. We can go ahead and explore both major and minor triads. Notice that interval to the first pitch above the lowest note is a perfect fourth, larger than the third found in root position and first inversion triads:

If you are able to hear the difference between major and minor chords, I think you should have no problem identifying them in second inversion. The following example example give you a few second inversion triads highlighting the fourth between the lower members:

Once again the triad retains its major or minor quality, yet the inversion has some distinctive qualities as well. You might hear that second inversion triad has a slightly greater sense of instability than root and first inversion ones. Or you might hear that space between the first and second pitch simply as being larger than a root position triad. You can use the chord’s sense of instability along with this larger interval to help you identify these inversions.

The above approach to identifying triad inversions is based on getting to know root position triads inside and out to use them as a point of comparison. Over time with practice you will hear chord inversions as distinct units without having to mentally compare with root position – but this does take time and regular practice.

In this article we have limited our study to major and minor triads in close position, but you should be able to extend your knowledge to full four-part arrangements of these chords (e.g. SATB choral music). In some ways this should be easier, as the distance between the bass voice and the tenor usually is large enough to hear it clearly. The ear then mentally reduces the chord to a close voicing: An example of a four-part chord with open voicing.

An example of a four-part chord with open voicing.

An interesting dimension to hearing open voiced chords like this one, is the possibility of learning to hear both the chord’s position as well as which chord member is in the soprano, which is normally the melody. In the example above, it is the root.

Once you are comfortable with triads, and perhaps even four-note triads like the example above, you can use the same learning technique for more complex chords, including sevenths and suspended chords, and their inversions.

As you gradually build up your repertoire of chord types you can use them as additional reference points for your mind’s ear. At first this will be a conscious process, but over time it will become automatic – and you will develop a truly powerful appreciation of harmony in music!