How to Arrange a Jazz Standard (Hans Hansen) 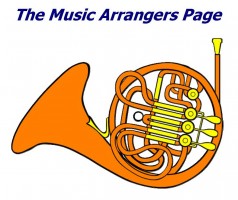 Today we welcome Hans Hansen of the terrific new arrangement blog “The Music Arrangers Page” to share something about the listening skills and sound judgements that go into arranging a jazz standard.

Before I start off, I would like to thank Christopher Sutton, for allowing me to write my first guest post at EasyEarTraining.com. It’s a pleasure to assist and work together with other like minded authors in the area of music arranging.

The following arrangement of “Jordu” which I did as my final project of one of my arranging courses at Berklee was far from perfect.

It was my first arrangement for five horns and rhythm section. However because of the mistakes I made, it’s useful to show you what will work and what won’t. As it turned out, in spite of these mistakes, it was broadcasted for a youth community on Dutch Radio.

I choose the jazz instrumental “Jordu” because it had a nice and memorable melody. It was composed by Clifford Brown & Max Roach.

To get a feel for the song it’s often useful to listen to a recording of the original version.

In my case, I ignored this advice and just started without any prior listening. I just thought that applying my newly learned arranging techniques were enough.

Always try to obtain a Lead Sheet of the original tune before you are going to arrange. A “Lead Sheet” is sheet music with melody and chords only. It gives you a solid basis to work from for developing new ideas in your arrangement. 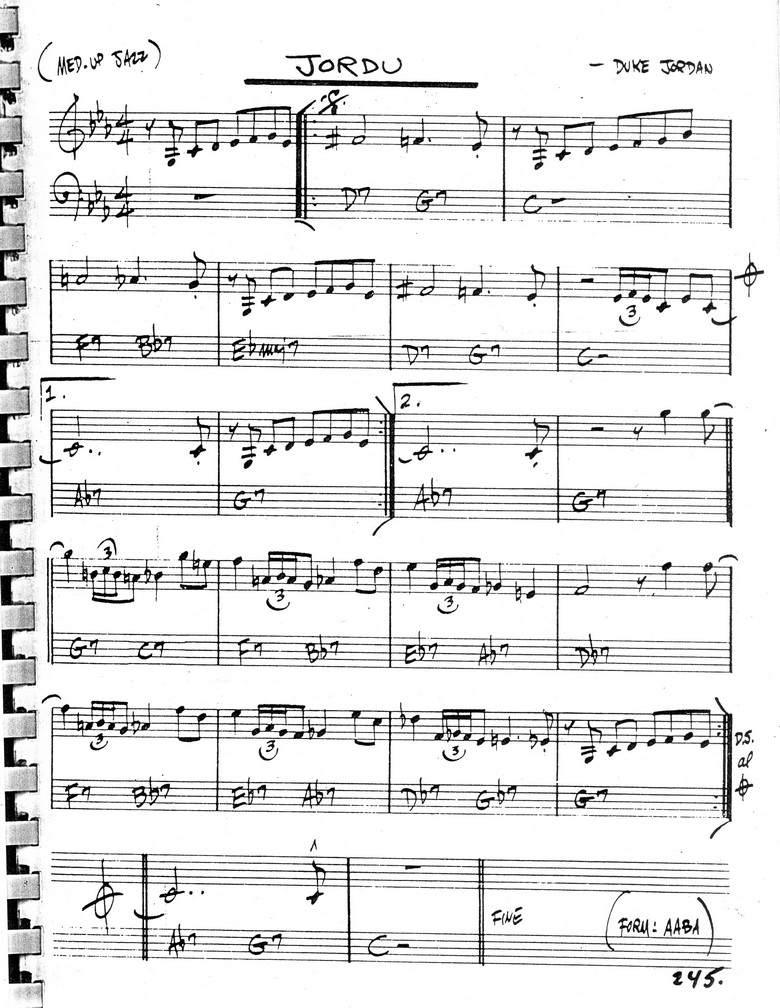 The lead sheet version of “Jordu” (click to enlarge)

I kept it in swing style.

What instruments are you going to use? Since this arrangement was going to be played by the Berklee Project Band I luckily knew the instrumentation beforehand:

For a 5-horn arrangement this is the usual setting because all the instruments have their own range and sound. They blend very well together.

Is it going to be a jazz-ballad (slow), medium or up swing. I kept it to medium swing, one quarter note equals 130. As you can see on the first page of the score below, I should have stated the tempo at the upper left corner, which I didn’t. Band leaders need to know tempos.

Choosing the Form of your Arrangement

Once you have a reasonable understanding of its melody and chord-progression in the original version, it’s time to construct the form. So, after checking out the forms of existing jazz arrangements, and at the same time keeping the original form in the back of my head, I came to the following divisions:

The letters A, B and C are called “Rehearsal Letters”. These are, as the title already suggests, used for rehearsal purposes.

When we look at the general form, which I kept very basic, we can subdivide this arrangement into five main sections:

Before we dive into analyzing the piece, I think it’s useful to first have a listen to the arrangement:

Listen to Hans’ arrangement of Jordu The intro here is purely used as a set up for the following A section. The harmonies used have no relationship with the actual chords and melody of the song. I think the intro would have been more affective when some part or hint of the melody was used.

The harmony does have a sense of direction though and moves toward the final target chord at the end of the third bar.

The rhythm section plays a straight rhythm along with the horns to strengthen the kick feel. This works fine on its own but it really doesn’t have any relationship with the main theme. I think some kind of swing feel should have worked better. This is where the main melody enters. Its played by the trumpet and doubled in unison by the alto sax and it has a pick up in the last bar of the Intro. In order to avoid writing out the trumpet part again, the alto sax uses a short cut called “Alto Col Trumpet”. This is written on the alto sax staff continued with a squiggly line until the end of this section.

The bass follows my written out walking bass line which is actually unnecessary because most bass-players are able to walk by themselves following the chord-progression. When you like to let the piano or guitar play specific rhythms in their chords, rhythmic notation is used as seen in the bottom two staves. The trumpet repeats the melody from the “A” section. This time the melody is partly played in unison by the alto sax and partly harmonized by trumpet, alto sax and tenor sax in “Voicings in 4ths”.

This voicing technique requires that the distance between each voice is a perfect 4th or a diminished 5th (augmented 4th) when needed. Look at the first bar of this section for an example. 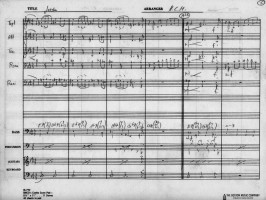 This is the contrasting section in the melody and all 5 horns play together here. The voicing technique used here is called “drop 2 and 4”. Because the melody is played in a higher register this technique fits in well. The same procedure has to be applied as in “drop 2”.

Start in close position with an added 5th voice, this can either be a doubled note one octave lower or and extra tension. Tensions are non-chord tones like 9ths, b9ths, #9ths, #11ths, 13ths and b13ths. Then lower the second and fourth voices of the close position chord an octave lower and you will end up with a wide spread chord, suitable for melodies in higher registers. The melody returns one more time to the main theme and is harmonized by all five horns. The first technique is 4 way closed double lead 8vb and the second one in the last 3 bars before B is 4 way close with an added tension. Two bars before the end the whole band stops with an accented kick on the second half of the fourth beat. This will give the piano solo in the last bar a clear entrance.

I think to enhance the final statement of the main theme, I would change the baritone sax in the last 3 bars to play the bass notes, Ab and G of the chords Ab7 and G7, rather than the Eb and F which are less strong. Piano solo backed up by rhythm section only. Piano solo continues but background kicks are now added by the alto and tenor sax, trombone and baritone sax. These kicks are voiced in “clusters” which means that all notes of a chord must be played within the range of one octave. The kicks are set up by a pick up motive in the last bar before B9. The guitar takes over the solo and is again backed up by rhythm section only. 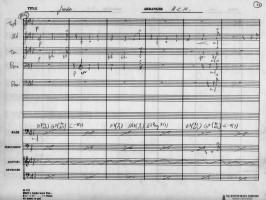 The guitar solo is supported by a legato background in the horns. This is to create contrast with the short kicks played behind the piano solo. The background part also reminds us of the main melody but played rhythmically less active here. Again the whole band comes 2 bars before C to a complete stop to give the trumpet and tenor sax in the last bar clear entrance for the next section. This is the “Arrangers Chorus” as explained earlier on. I used the same chord-progression as in the A section but the melody is composed by myself. It is definitely not the same as the original one but it fits in nicely to create the necessary contrast.

Tenor sax doubles the trumpet one octave below in unison. This is the “Shout” section of the arrangers chorus where the whole band blasts together. To mimic the original melody I have composed it in a sequences. That means that parts of melody called motives are repeated but at the same time transposed up or down.

When you look at the trumpet part you will see that the first 4 bars are transposed down and the last 4 transposed up. I used the “drop 2 and 4” technique to create powerful open voicings. Note the baritone sax in the last 2 bars before C17. It is doubling the bass line as a setup for this section. In the last sub-section I returned to the main theme of the original melody because we were nearing the end of the arrangement.

What I did here was a bit strange. I copied the entire A25 section and transposed the trumpet one octave up. Strangely enough it did work, however I wouldn’t advice one to copy this technique because:

The distance between the trumpet and alto sax is to much. Between the individual horns it should be not more than one octave. If the trumpeter is not a professional he might, especially in the higher registers, play out of tune.

Since the trumpet is playing higher up it will sound much louder than the other horns. Dynamically, it wouldn’t be very balanced. This is the ending section. Again I didn’t use any material from the original harmony or melody, instead I composed my own chord-progression and voiced the horns accordingly. Musically it worked fine but it should have been better if I had used some part of the main theme and put a long fermata at the end. When we look at the rhythm section it changes to a straight bossa-nova rhythm which doesn’t really contribute to the overall unity of the arrangement.

I enjoyed writing this post and my intentions are that it gives you a better view on what arranging is all about.

At the end it all comes down to your own taste and interpretation. It is your challenge to blend these together with the original material and existing arranging techniques.

I would like to encourage you to start arranging songs by yourself. Good luck! Hans Hansen is the author and founder of The Music Arrangers Page and is always happy to share his passion for music arranging.

In addition, he is a well experienced piano & bass guitar teacher, specializing in classical, rock and jazz. Any questions you have about music arranging; he is the person to ask!