Home » News » Getting the Blues, A Musical Life, The Science of Learning, and The Lydian Chromatic Concept

Getting the Blues, A Musical Life, The Science of Learning, and The Lydian Chromatic Concept As musicians, we are naturally compelled to describe ourselves by the kind of music we play – after all, we end up favouring and specializing in a genre or two, and sticking to that, building skills and knowledge related to that style. But what happens when we stretch beyond that rigid self-definition?

This week, we examine the places where genres meet and mingle by interviewing a special podcast guest whose inspirational musical career spans a fascinating array of styles and instruments, looking at the science that will serve you best in learning every style from jazz to metal, introducing you to a scale that has inspired musical innovation and experimentation by countless greats across genres, and preview a new Resource Pack that will help you play both the Blues and the styles influenced by them.

But first, a reminder about a very special event happening tomorrow…

A Masterclass with Music Entrepreneur HQ 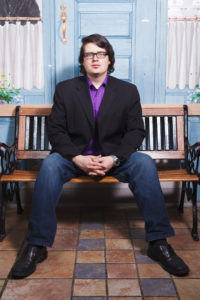 To wrap up the month of May, we’re once again putting on a free online masterclass! Learn about music entrepreneurship with David Andrew Wiebe of Music Entrepreneur HQ.

Music Entrepreneur HQ provides musicians with the information they need to succeed in the industry – everything from marketing and promoting yourself, to getting paid, to connecting with your audience through social media and your peers through networking. If you’ve got the music part nailed down and are looking for tips on how to make sure it reaches as many ears as possible, you won’t want to miss this!

This live event will be on Saturday, the 26th of May at 3 PM UTC (Click here to see that in your timezone). Register to be a part of this special event!

Not only are the Blues powerful and expressive in their own right, but they influenced and spawned so many other styles that it’s hard to overstate their significance in modern music. 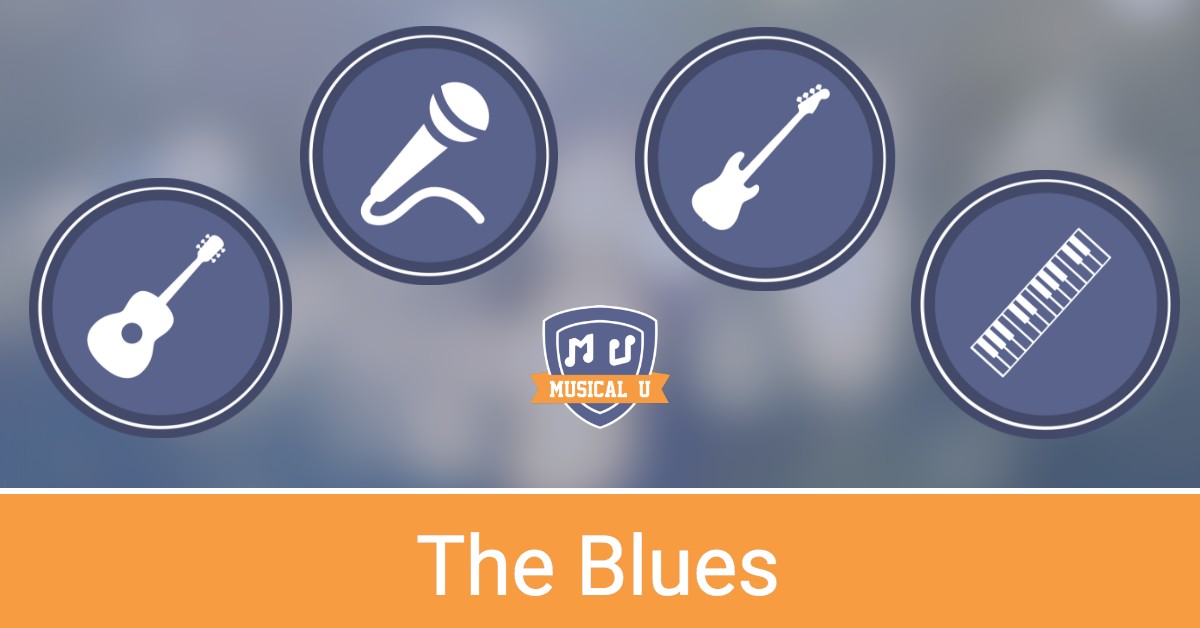 This month, Musical U brings you Resource Packs to give you the theory and specific instrument techniques needed to understand and play the Blues. This covers everything from the form, phrasing, and chord progression behind this style, to the tools you’ll need to start improvising and composing your own licks and riffs.

Head to The Blues: Resource Pack Preview for a peek at what our Resident Pros in piano, bass, and guitar have in store to help you play this improvisational and deeply emotive style.

When you think of the Blues and guitar, you are probably imagining an iconic blues solo from B.B. King, Eric Clapton, or one of the other legendaries. As these guitarists exemplify, there are some stylistic qualities of Blues guitar that are unique to the genre. Best Blues Guitar Lessons Online shows you how to take a short lick and “bluesify” it.

While the guitar player is soloing away, what is the rest of the band supposed to do? The Blues are fantastic for bass players as well, and a bassist has a lot of freedom to add their own harmony and color during a solo. Become a Bassist demonstrates some of the unique licks that a bass player can add to make the solo section even more full and musical.

When we think of the Blues, the 12-Bar Blues progression and walking bass are two things that typically come to mind – after the melancholy lyrics, of course. But don’t be too sad, piano players, you have a starring role in the genre as well! Music Motivation uses the 12-Bar Blues to show how to add a walking bass pattern on the piano.

As many musicians with a rich, lengthy career will tell you, a musical journey often involves unexpected surprises, revelations, and a whole lot of shifting gears. 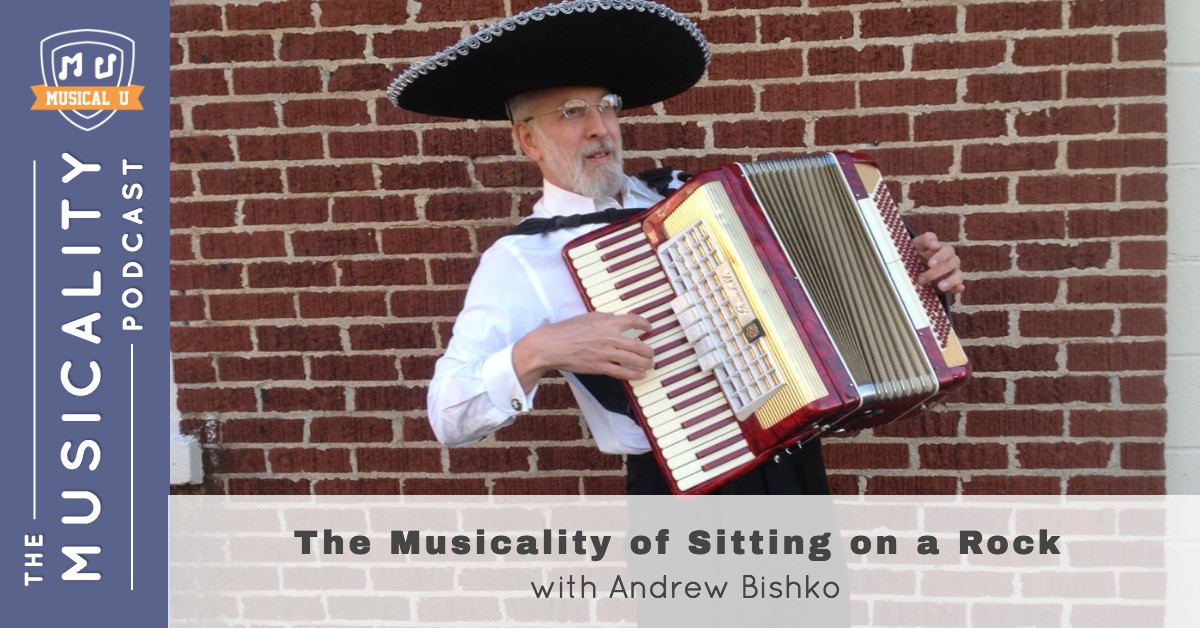 From playing classical piano, to touring the world in a reggae band, to discovering the Native American flute, to studying and playing Klezmer and Mariachi music, Andrew’s never-ending thirst for discovery of new genres, instruments, and musical traditions has fuelled his rich career as a multi-instrumental musician, educator, composer, and author.

In The Musicality of Sitting on a Rock, with Andrew Bishko, he discusses his incredible collection of musical experiences and how they have informed his student-centric teaching method, and shares a plethora of wisdom and insight that could only come from a decades-long career fuelled by an immeasurable love and curiosity for music.

For all that he has accomplished, it was surprising to learn that Andrew started off struggling on the flute. No matter where we end up, all musicians start out at the same place… and that can be comforting! For the aspiring flautist, flute embouchure mistakes are common when first picking up the instrument. The Flute Coach discusses six embouchure mistakes to avoid.

When he was young, singing was a physical impossibility. But Andrew has grown to love singing! At Musical U, we believe that the voice is our natural instrument and singing is a very important part of becoming a musician. Yes, even for non-singers! Sing Like You Speak has a fantastic lesson for bringing out the natural singer within you by using your natural abilities to breathe and speak.

It’s always inspiring to hear Andrew talk about his experiences with the Native American flute, and even more inspiring to hear him play. For Native Americans, the flute isn’t just a musical instrument – it is a means for deeply personal expression, used in ceremonies and spoken of in legends. Carolin Nobles gives a beginner lesson on getting started on this wonderful instrument.

The Science of Learning

Memory is funny. You’ll learn a piece to perfection, perform it for an examination, then take a little bit of time off – and poof, it’s gone. 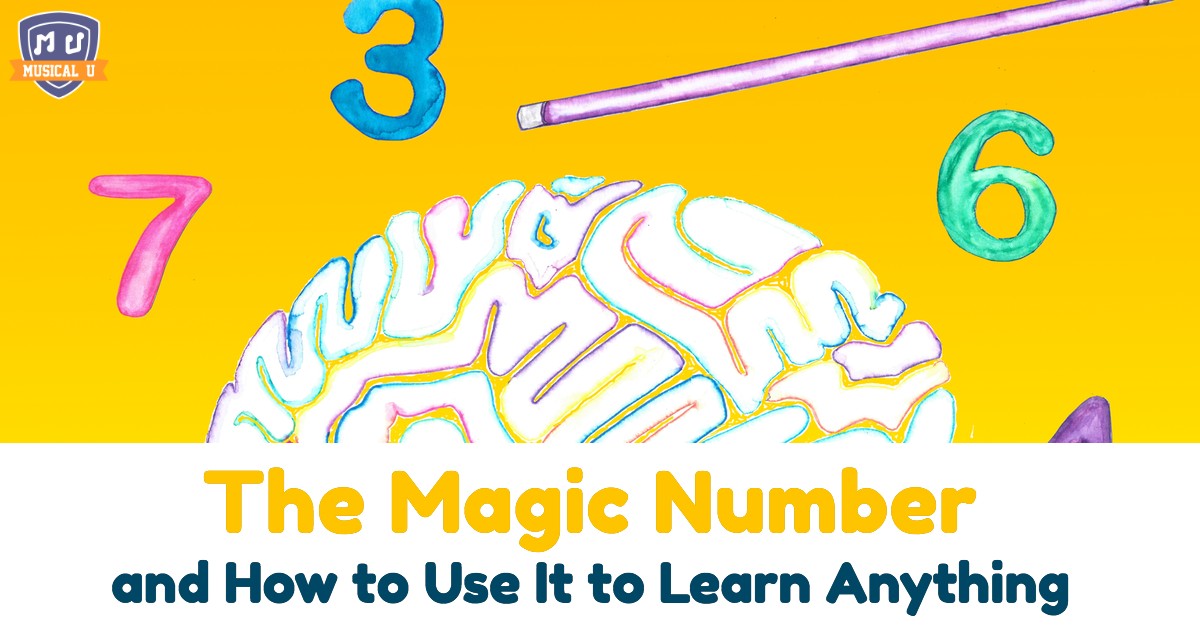 What if there was a way to apply the neuroscience behind memory to your musical learning, and make things really stick?

In The Magic Number and How to Use It to Learn Anything, music educator Suzan Stroud explores the concepts of working memory, learning in threes, and musical mastery to show you how you can learn as much as possible, as fast as possible – without any mental fatigue.

We at Musical U often mention that learning to play music has many benefits beyond just becoming a musician. These benefits have been extensively documented in several scientific studies, and one of the most intriguing things about playing music is its positive impact on the brain. Smart Piano offers a look at what happens to the brain while playing an instrument.

Suzan talked about three major types of memory involved in the process of learning music. Many musicians rely on muscle memory to “get the music under their fingers” and will be able to play difficult passages with confidence. Maui Music School examines the concept of muscle memory.

You may be familiar with certain sayings that music teachers and musicians have developed to help remember the notes on the staff. In many ways, finding memorization tricks can be very useful. Musicians Inspired recommends that you use the Landmark System to speed up memorization of the notes.

In Western music, we often think of the major scale as the “base” scale – the one that we compare all other scales to.

However, there’s another scale that is more balanced, tranquil, and centered than the major scale – the Lydian mode. 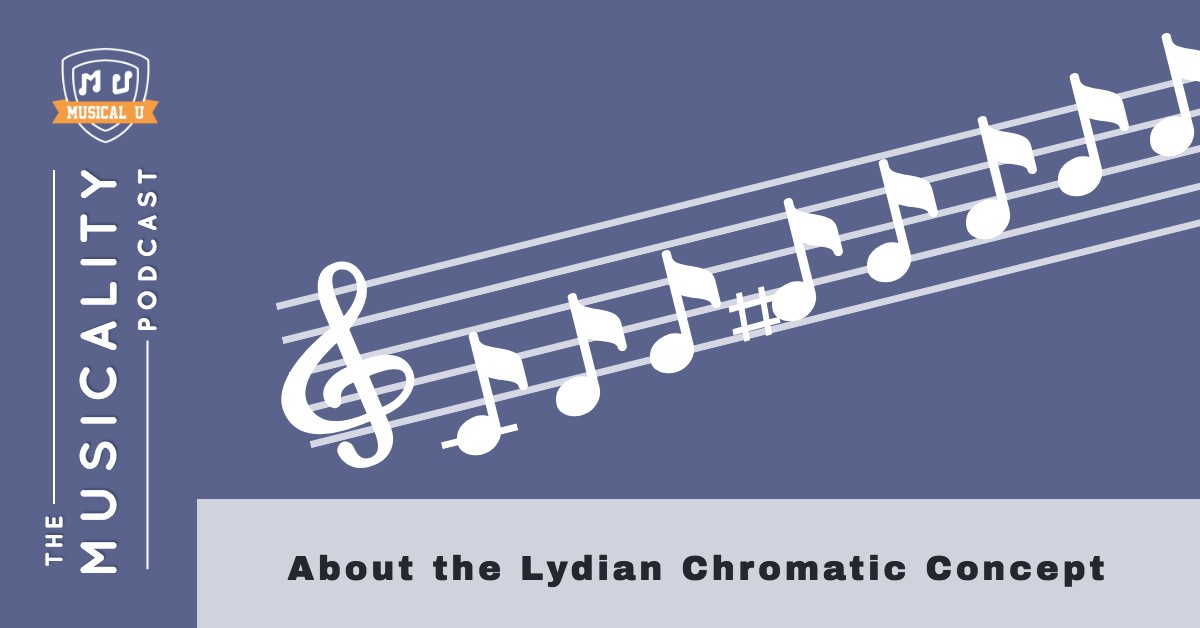 In About the Lydian Chromatic Concept, Musical U’s Andrew Bishko discusses the fascinating theory that places the Lydian scale at the center of the Western equal-tempered system, and showing the far-reaching influence of the concept tonal gravity.

What an amazing concept that Andrew discussed – there is much that even the experienced musician can learn in this episode. If you found that you needed some visual aids to help further your understanding of this subject, check out this great lesson from Arthur Fox Music that illustrates the tertian order explained in the episode.

In a previous Musical U blogpost, Andrew taught how you can start modal improvisation easily on the piano. The Lydian mode has its own unique characteristics that make it perfect for this exercise.

From Genre to Genre

After you have a good grasp of your instrument, a great avenue to explore is to switch things up and learn a style or tradition outside your primary genre of study.

Are you a classical piano student? Try incorporating jazz or the Blues into your repertoire. Do you play lead guitar in a metal band? Add some rhythmic interest to your playing by taking cues from math rock. Is reggae your jam? Why not learn to play in the similarly groovy styles of funk and soul?

Trying on a new genre, a new learning style, or even a whole new scale offers the opportunity to learn and practice new theory, techniques, and skill sets, and you’ll find that much of your learning will carry over into your existing practice. After all, the various arts of sound interconnect on a deep level, and influence and learn from one another in complex and delightful ways!