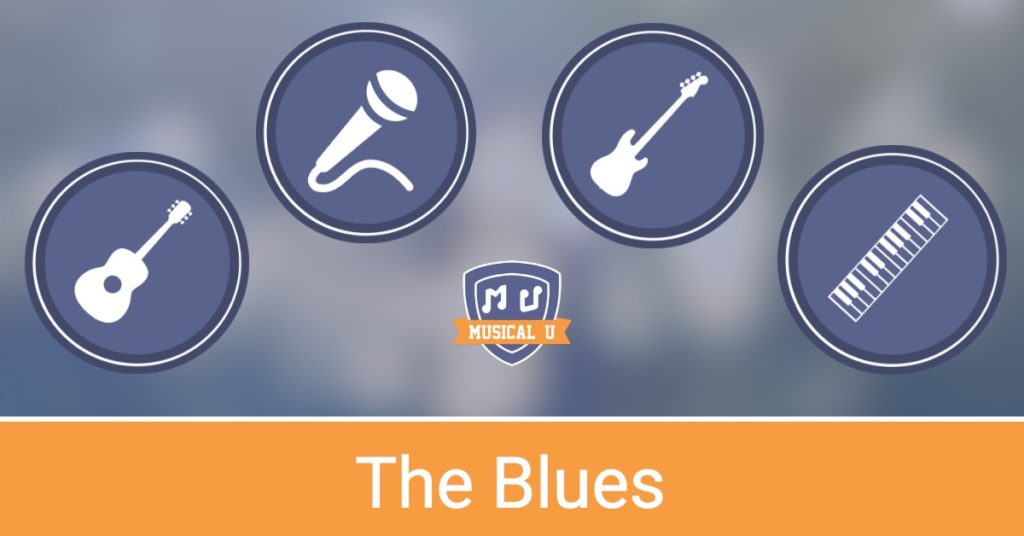 Several centuries ago, African scales met European scales in the colonies that became the United States. The resulting musical melding broke open the Western harmonic system, revealing new musical treasures and expressive possibilities. African-American music went on to conquer the musical world, giving birth to (or strongly influencing) most of today’s popular global genres. Of these, the most fundamental is The Blues.

When you learn to play the blues, you’re tapping into a powerful tradition and improvisatory style. And you’re exploring the roots of pop, rock, country, and jazz – all the genres that flowed from and around them, such as bluegrass, R&B, hip-hop, EDM, metal, and so on – just about every pop genre on the planet has its roots in the blues.

While there are many cultural and expressive elements to it, the nuts and bolt of the blues can be broken down into specific practice techniques on our instruments and specific elements of music theory.

The problem is that the blues itself breaks the typical rules of music theory. If you’re majorly into the major scale, you’ve got some surprises in store…

In this month’s Instrument Packs Musical U’s Resident Pros for guitar, piano, and bass show how each one of these instruments has a unique relationship to the blues. They will untangle the theory and practice of the blues, and how to get you started in your jammin’ journey.

The blues is an incredibly vast style of music with a rich history. While many guitar players learn the basics of the blues very early on, most never take it past these basics. Additionally, any guitar player who hasn’t explored the blues yet will see great benefits from doing so. Resident Pro Dylan Welsh has got you covered:

The blues makes a great vehicle to practice many different rhythmic and improvisation concepts – plus, you can play the blues with almost any musician anywhere, making it a great tool for communication and jamming.

The blues breaks the old rules of functional harmony – and yet still sounds great! Resident Pro Steve Lawson gives you the theory and practice of blues bass, along with specific ways to construct blues bass lines and more on the specific rhythmic qualities imparted by the bass:

Break into new harmonic territory and learn to hold down the foundation in any blues jam with Steve’s blues pack.

Resident Pro Sara Campbell has the blues, and is living proof that playing the blues makes you feel good!

Sara breaks down the blues in simple, doable steps that soon will have you playing the blues and feeling good.

Coming up next month…

While the blues can blur the distinctions between major and minor, knowing and understanding what distinguishes these two musical concepts one from the other can sometimes be tricky, even in non-blues contexts.

It doesn’t help much that the terms “major” and “minor” are used in so many different ways – intervals, scales, chords, keys… And that major keys have some minor chords and vice-versa, and so on…

Is it any wonder that the so-called “basic” skill of telling major from minor can sometimes baffle even highly experienced musicians?

Next month, our Musical U Resident Pros will cut through the confusion and show you how to take advantage of the specific qualities of your instrument to help you to hear, play, and compare major and minor qualities.