Here are a few recent developments in the world of music and sound which might help inspire or guide you in your ear training!

Back in October we covered the launch of Theta Music Trainer, an exciting new website which provides a wide range of ear training games. You play online via your browser, and the games teach everything from intervals and chords, to rhythm, music reading, and more. Varying difficulty levels make it easy to get started, and there are ‘courses’ you can take to build up your skills in a structured way.

Here at Easy Ear Training we love seeing fun new ways to develop aural skills, and so we were excited to hear about the new version of Theta Music Trainer, which introduces three new games, a smart Personal Trainer feature, and strong support for music teachers to use the games with students in the classroom. It also adds Spanish to the English and Japanese language options already available.

Two of the new games focus on your ability to judge pitches, with Speed Pitch testing your ability to make broad judgements quickly, and Dango Brothers essentially making a game of tuning a guitar string. I’ll admit, I had to look up what a Dango is – but fortunately this didn’t hinder my ability to enjoy the game!

Becoming a Theta Music student is as easy as registering for a free account, and these new features make their affordable subscription plans even better value than they already were – so what are you waiting for? Go, play!

A possible end to the “Loudness War”

You may have heard the phrase “Loudness War” when referring to audio quality: over the last 30 years or so, increasing use of dynamic range compression has caused the quality of recorded popular music to deteriorate significantly in an attempt to sound louder than other tracks – and hence sell more copies.

This is a great talk about what the “loudness war” is, how it came about, the terrible effect it’s had on recorded music, and (on a more positive note) how it might be possible to end this war…

Introducing children to music in the right way is core to their later musical development, whether that’s for playing or simply enjoying listening to music. We’ve covered many aspects of early age ear training here on EasyEarTraining.com, as well as seeking new ways to use music itself to teach aural skills.

Over at the Color in my piano blog, Joy writes about an exciting new Kickstarter project which aims to improve the way kids first encounter classical music so that they don’t grow up just associating “classical” with “boring” or “outdated”. Based on their experience teaching children and seeing them get excited by music and storytelling, classical pianists Elizabeth and Sonya Schumann have developed the concept of a story-based CD which tells two stories, using real classical music as an integral part of the stories:

Who are we?
We (Jeanne and Sonya) are classical concert pianists who happen to be sisters. We decided to record a children’s CD which, through narrative storytelling, is an attractive vehicle for classical piano pieces.

Why do we want to record a children’s CD?
Government funding for Arts Education has been cut everywhere, and we’re worried that children are not exposed to classical music. If classical music could be presented to young children in a way that captured their imaginations, a larger audience of children could grow to love music in a way that would enrich their whole lives.

What is the goal?
To allow elementary school aged children to discover the world of classical music.

The project seeks to raise $12,000 to develop, record and manufacture the CD and distribute 2,000 free copies to at-risk arts programmes in the US.

Visit the project’s Kickstarter page to find out more and make your pledge to support this imaginative and exciting project!

Followers of our Hearing Effects series will be learning all about the wah-wah effect in the next article. For now, suffice to say it gets its name from making a guitar sound like a human voice going “wahwaaahhwahwah!”

It may not be the prettiest iOS app, but newly released “Wah-Wah” from developer Electrohoof makes up for that by being enormous fun – and potentially useful for ear training too! Simply run the app, pick a song from your iPhone or iPod Touch’s music library, then tilt your device to apply the wah-wah effect as the song plays. 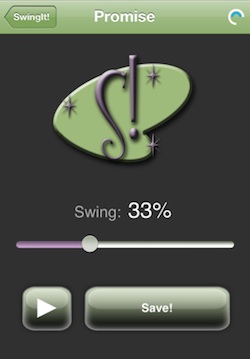 Second up: SwingIt! Though not directly connected to it, the SwingIt! app is very much the spiritual successor to the project we covered back in May: The Swinger, which takes any song you throw at it, and gives it a swung beat. SwingIt! does the same thing but on your iOS device. It’s free to get the app and experiment, but costs $2 each time you want to save one of your swung remixes back to your library – not a bad way to handle pricing. Check out the Evolver.FM post for a couple of sound examples from the app!

It would be easy to dismiss these as novelty apps performing a gimmicky audio trick. But for anybody who’s trying to get to grips with the sound of the wah-wah effect, or the difference between straight and swung beats, these apps must be among the most intuitive (and fun) ways to develop your ear!

That’s all for this time! Have we missed some exciting new ear training, aural skills or music education news? Let us know in the comments below!