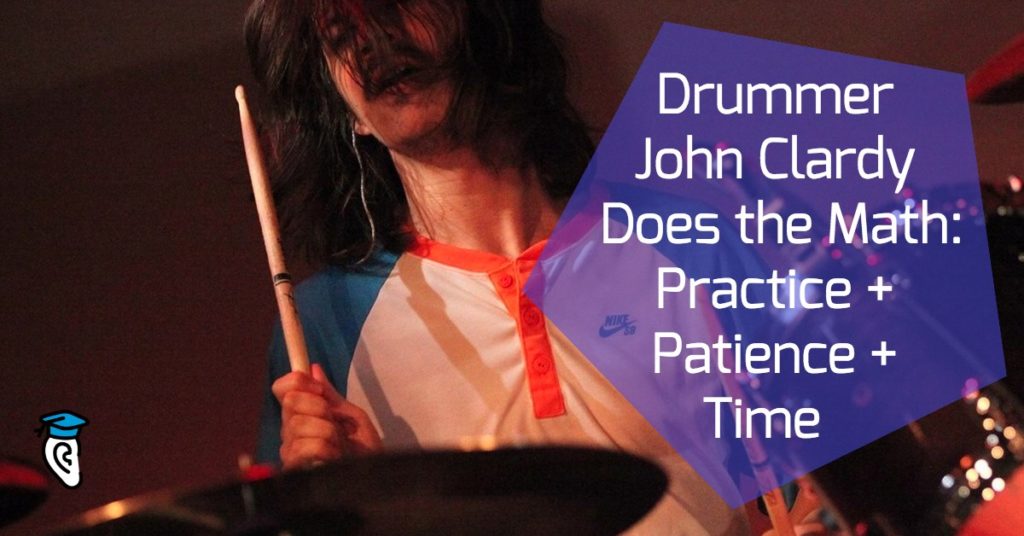 John Clardy is widely admired by drummers “in the know.” After paying his dues on the road, John became an integral member of Tera Melos, who fuse various progressive genres like math rock, punk jazz, and hyper-technical guitar pop. John seems to live and breath odd time signatures like 5/4 and 10/8. He currently teaches privately and at the School of Rock.

We were especially impressed with Tera Melos’ Weird Circles, featured in Developing Your Rhythmic Ears, and sought him out for this interview.

Q: Could you tell us a little bit about yourself, your musical background, and how you came to be the drummer for Tera Melos? 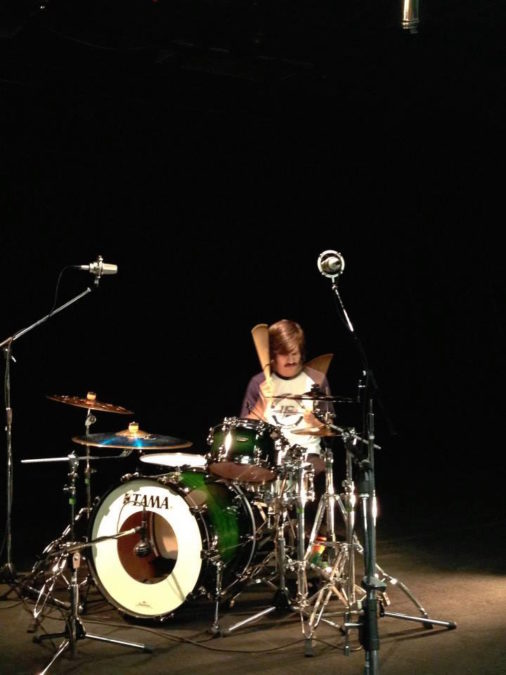 I’m a guy from the Dallas/Fort Worth area of Texas, who comes from a very musical and artistic family. My father has played guitar since he was a teenager, and his two sisters are both visual artists. On my mom’s side, two of her four brothers play bass and played in bands throughout the years. I’m the first drummer in the family.

The first band I fell in love with was the Beatles when I was in the 4th grade or so. Through my father, I grew up on Jimi Hendrix, Led Zeppelin, Deep Purple and Black Sabbath. I consider myself very fortunate to have been exposed to most of “the greats” throughout my childhood as they helped establish a diverse foundation of reference points for me.

I started playing drums around age 14 and was playing in bands with friends not long after. When I got to university I started to play in better bands which helped my vocabulary as a musician immensely.

I started touring about 10 years ago. In 2008, a mutual friend found out that Tera Melos (whom at the time I’d heard of but hadn’t actually listened to) was in need of a drummer and he urged me to try out for them. We corresponded via the phone and email over the course of a few weeks and met very briefly in San Francisco where I was on tour. Then I came up to Sacramento to practice with them for about 10 days, after which I became a member of the band. That was August 2008.

Q: Who are your main artistic influences as a drummer?

I could go on about this for very long time, but will try to keep it concise. When I first started playing, my favorites were Mitch Mitchell and Dave Grohl, followed up closely by John Bonham of course. I got really into punk in my teens. Through Josh Freese interviews I became exposed to John “Drumbo” French of Captain Beefheart and the Magic Band, who was one of the first drummers to really turn my world upside down after I’d established my base as a musician.

This was around the time I discovered Bill Bruford and Billy Cobham, who were also serious game changers for me. I could feel the energy and innovation in their playing, and it spoke to me as being very musical in addition to being creative and virtuosic.

Not too long after that, I heard Hella for the first time and saw them play shortly after. Zach Hill shattered the perception of limits that I had and I wanted to be a disciple of not just his playing but the approach behind it: he incorporates concepts like trying to play more reminiscent of a thunderstorm or stampede as much as trying to play a beat.

Q: As a successful touring musician who is busy teaching when not on the road, is there still time for honing your own chops? What does a typical practice session look like for you these days?

I typically teach four days a week and then try to spend at least two of the other three days practicing on my own at my rehearsal space. I don’t really have a set routine for my personal practice time but I try to start with a quick athletic style warm up (some simple dynamic stretches) and a breathing exercise. 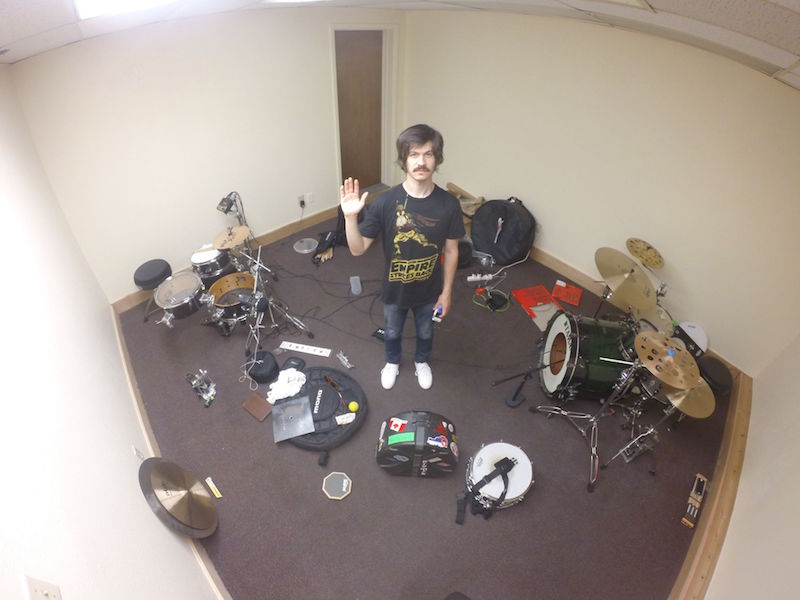 I work on Tera Melos songs, both new ideas and also old ones to keep up on them. Aside from that, I try to work on ideas I’ve had recently and sometimes just run through kind of technique stuff both free form and with a click. I record myself often, documenting ideas and sometimes just playing with sounds.

Q: You mentioned that one of your students at the Dallas/Fort Worth School of Rock recently asked you to help him decipher a Tera Melos drum part, for “Weird Circles”. Could you tell us a bit about that?

School of Rock Southlake was doing a Prog rock show, and a student had lobbied for one of our songs be to included in it. So another student who was not really a Tera Melos fan was cast to drum on it, and I ended up becoming that student’s teacher for private lessons.

I felt a little awkward about teaching my parts in that context, largely because I was having to talk about myself and my approach a lot and I started to feel very self-conscious. In a lesson at the school, I frequently talk about drummers and other musicians that I feel are important—I like to give mini history lessons on Hal Blaine or John Bonham; or “No, Ringo was actually a really important part of the Beatles and the role of the drum kit in music”—but not myself if no one is asking.

Overall it was a really fun experience and a good one for me in a lot of ways. One of those ways is that I needed to simplify the drum part and explain its context in relation to the rest of the song. The student was fairly new to the drums—less than two years of playing—and so we worked out parts that were stripped down but still carried the rhythmic theme. I actually didn’t know that the song is in 10/8 time (with a 123-123-12-12 pulse) until I asked the other drum teacher to help me write out the drum part to the bridge, as I’m terrible at reading and writing music.

Q: A sense of rhythm is one of those musical skills which many people think you need to be “born with”. What’s your opinion on that? When a student comes to you lacking even the basics like clapping in time, what is your approach?

The latter can lead to a daunting feeling initially, but I think anyone is capable of getting at least a basic understanding of western rhythm even without innate ability, as long as they are willing to put the time and focus in. People are capable of extraordinary things when those factors line up. With all the greats it’s a combination of factors that make them that way—whenever you hear someone say “Oh they have all the talent in the world but no drive,” it’s about someone that didn’t fulfill that potential.

And so in that situation where someone is really at the very beginning of learning to play music, I try to work with them a lot on listening to music and listening for the backbeat specifically. To see whether they are consciously aware of it or not, and to recognize how strong its presence is.

Q: Is there one question or challenge which comes up more than any other with your students?

How did I develop speed, with my hands and right foot? The answer is the same: practice, patience and time. I’m reluctant to work on any kind of in-depth kick technique beyond singles until the student has a solid foundation in other aspects because in young people it usually becomes just a “trick” to use in front of people instead of a tool to expand playing. 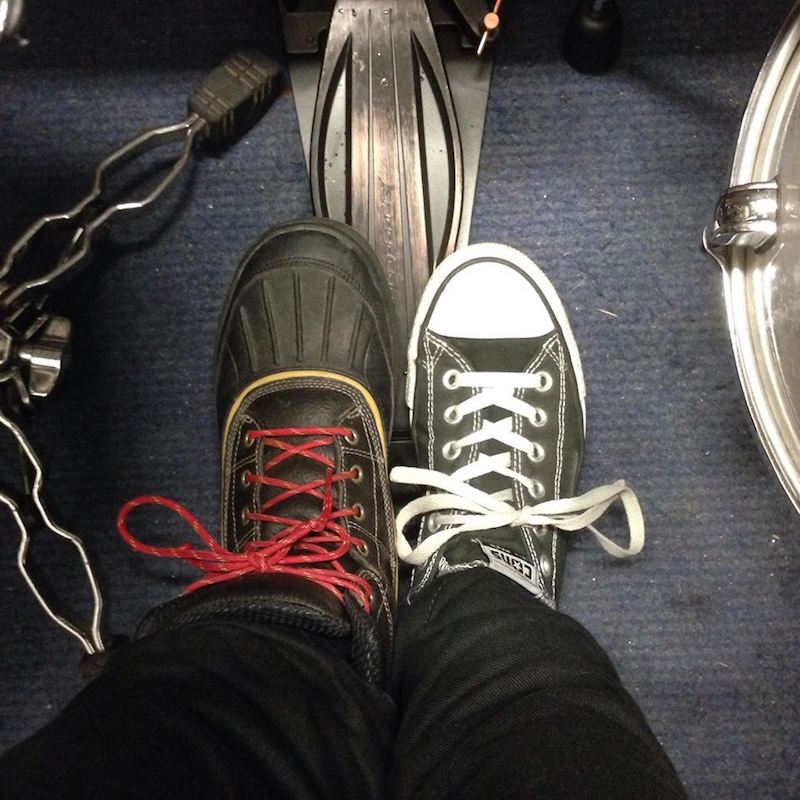 Q: Do you think the complex time signatures and rhythms used by Tera Melos and in the math rock genre are something which can be learned by early-stage musicians or are they best left as an advanced skill?

Complex time signatures and rhythms can be learned at early stages; but again, they require a lot of patience and focus. Some people will benefit by learning odd rhythms earlier on, but at the same time, it could be a big hindrance if that’s all they focus on and can’t even play a standard beat to a click track. That may sound like a “sellout” kind of thing to say but if you’re serious about playing music full time, there’s a good chance that you’ll have to play simple things to a click at some point.

Q: Our audience is filled with passionate amateur musicians, often self-taught to a large degree. If you could offer them one tip for improving their rhythm listening skills, what would it be?

It really starts with an open mind, and determination. To not be deterred if something doesn’t click in the first few listens. You need patience—because I think giving yourself time to process things is very important. It’s better to spread your work out—whether it’s writing, playing or listening—over a period of time as opposed to one big cram session.

Thank you, John! Terrific inspiration and advice for our audience.

Practice, patience, and time. Do the math and amaze yourself with the results!