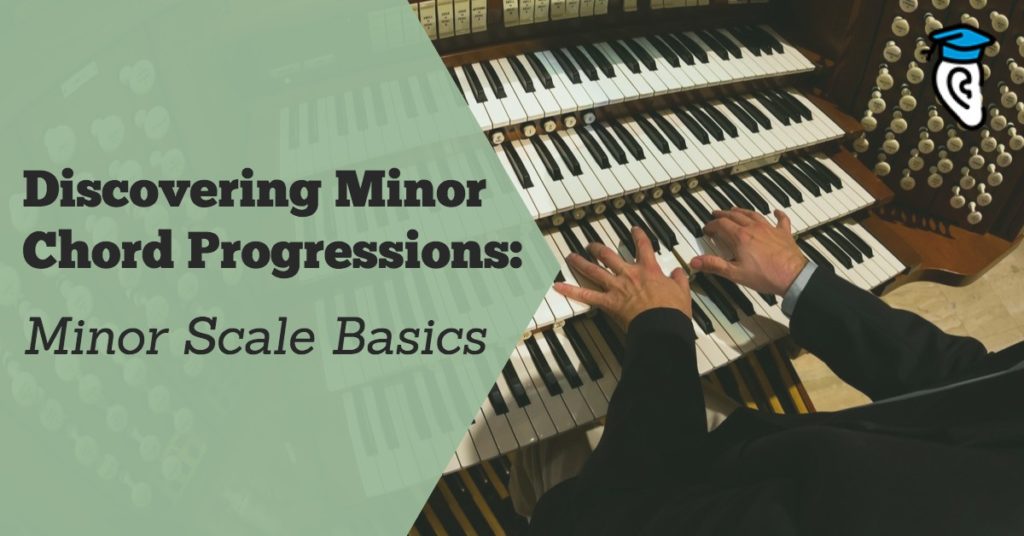 While most of the music that you hear on the radio sticks to basic major chords, it is important to learn how to use minor chord progressions in your music, whether you are a performer, producer, or songwriter. You can hear minor chords in all musical styles from rock to hip hop and pop music.

Why Use Minor Chord Progressions?

While major chord progressions are often upbeat and happy, more moody and brooding music is created using minor keys. Sad songs benefit from the overall emotional sounds in the minor keys. Sometimes just dipping into a minor key temporarily changes the feel of a song or can add some sentimentality that was missing in the brighter major keys. In this article you are going to learn the basics of minor minor scales which minor chord progressions are based on.

Each has a very distinct sound that can be used a variety of ways. It might take some practice but you can learn to recognize these scales when you hear them in use.

For example, the relative minor scale of C Major is A minor because A is the sixth note of the C Major scale. Both of these scales share the same key signature (no accidentals). This makes A minor easy to use and very popular, and we will use the A Minor Scale for many of the examples in this series.

This is the easiest minor scale to figure out because the accidentals stay the same. On a keyboard you would play all white keys for A Natural Minor. The process for finding the natural minor scale is to start the scale on the sixth note, then run through an entire octave.

For example, in the key of C Major, the sixth note is A. To find A Natural Minor, start there and then play all the keys up to the A again. This is the A Natural Minor Scale.

The Natural Minor Scale is also called the Aeolian Mode, based on the modes used before Western harmony as we know it was formed. Instead of using major and minor scales, musicians used a series of church modes. For this reason the Natural Minor scale can sometimes sound ambiguous and almost timeless.

Exercise: Play along in Natural Minor

In this exercise, you will play along with the backing track using the A Natural Minor Scale. If you are on a keyboard, this will be all white keys, starting from A. You would spell this scale: A-B-C-D-E-F-G.

Improvise on your instrument or with your voice, using only this Natural Minor scale. This is just to help you get used to hearing the scale and practice playing along.

Improvise on the A Natural Minor Scale:

When you play the Harmonic Minor Scale, you may recognize its distinctive sound. Play the video below, and listen. If you have a keyboard available, try to imitate what the pianist plays.

Listen to the Harmonic Minor Scale:

The scale gets its name from the fact that it is often used for composing melodies, where it sounds good to use these different accidentals for parts of the melody which are ascending and those which are descending.

It takes some practice to memorize all of the Melodic Minor Scales on your instrument! You can use these tips to make practicing scales more fun.

Chords in the Minor Scale

With major keys, we can easily derive the set of chords from the key, just by drawing from the notes of the major scale. With minor keys, we have three different scales, resulting in many more possible chords!

Following the chords in the three types of minor scale, you will come across the following chords. While this may seem like many chords to remember, the reality is that you will most likely only use a handful of these chords on any tune.

As with major keys, the chords most often used are the tonic, dominant, and subdominant chords. In the key of A minor, for example, these would be the Am, Dm, and E chords.

Here are the chords which follow from each of the three types of minor scale. The dominant chord (V) is usually formed with the raised 7th to create movement towards the tonic. You can transpose the chords below into any key.

Notice that the Harmonic Minor Scale Chords are different descending than ascending.

How to Learn the Minor Scales

If you are new to minor scales and minor chord progressions, these may seem a little daunting. After all, with major scales, you only need to learn one way to play, and then you’re jamming. But here are a few tips:

Extending your chord progressions to minor keys opens up a new world of harmonic possibilities for your music-making. Start out right, by mastering the minor scales and understanding how the minor chords used in minor key progressions follow from them.