An Introduction to Country Music 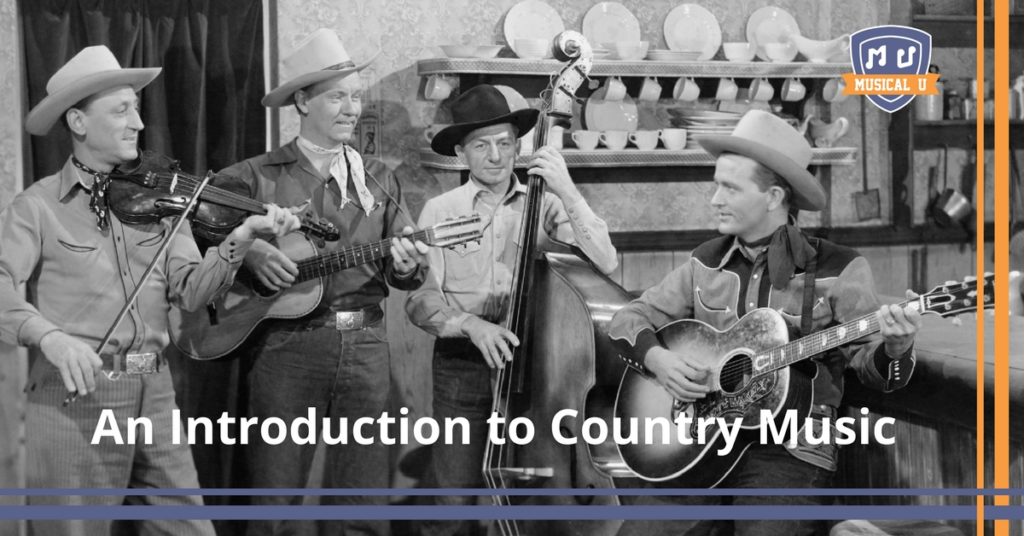 The birth of country music began with the folk songs, ballads, and musical creations from Irish, Scottish, and English settlers of the Appalachian Mountains. A decidedly American style, country music centers around tradition but its simple form is perfect for a range of different themes – a fact that has helped prompt the development of country rock, country pop, and more.

As the genre continued to develop, the old-time music evolved into the rhythmic modern adaptations we know today, all the way from the rock-infused “Bakersfield” sound to pop-oriented country ballads.

The History of Country Music

Settlers in the southern Appalachian Mountains of the United States came to the country with instruments they had been playing for hundreds of years. The music they created came from unique Scottish and Irish fiddle styles, exciting Spanish guitar licks, and even runs on the exotic African banjo.

As the 19th century progressed, various groups from central Europe and Britain moved to Texas, creating a cultural hub that came together to form a brand new kind of music.

At its core, country music is about simple sounds, usually built around a plain melody and 3 chords. The 3 chords most commonly used in country music are the “I”, “IV” and “V7” chords, for example “G”, “C”, and “D7” in the key of G major. What country may lack in musical sophistication it makes up for in emotion, through its sounds and lyrics.

Though experimentation within country music is becoming more common, many artists still build upon the adaptations of simple and inspiring melodies that made up the early days of mixed Appalachian and American music.

From Western Swing to Modern Ballads

The very first group to enter the country music scene was the Carter Family, who flourished during the 1920s and continued to perform for several decades.

As new styles were introduced into the mix, musicians found themselves playing with new sounds and adapting traditional country melodies. Though western swing originated during the late 1920s, its popularity officially began to peak during the 40s, blending new upbeat elements with smooth jazz, blues, and Dixieland tunes. Drums were incorporated for the first time in western swing and we discovered the voices of artists like Bob Willis, Roy Rogers, and Gene Autry.

During the mid-1950s, the “Nashville” style began to manifest, blending storytelling with the sounds of swing and jazz. Many Nashville-inspired songs were all about smooth voices backed by vibrant orchestras full of different instruments.

At the same time, the “Bakersfield” sound was emerging, beginning in the honky-tonk bars of California. Though it was grittier than the music coming from Nashville and drew on many aspects of rock and rockabilly, it achieved a similar level of popularity with singers like Webb Pierce and Buck Owens.

Country music has transformed to meet the styles and preferences of the modern audience. While classic forms of country music are still enjoyed around the world, many up-and-coming artists now focus on blending the traditional singing styles and simplistic melodies of country with modern iterations of rock and pop.

For many, the “Class of ‘89“, a group of country superstars who debuted in 1989, helped to bridge the gap between the 20th and 21st centuries in country music. They drastically altered the style with a new sense of youthful vitality and passion.

Though the style of country music has changed and evolved over the years, it remains a powerful genre that attracts people from a range of backgrounds and cultures.

Who is your favorite country artist? Why do you like them?