Home » How To » Song Writing » Consonance & Dissonance in Music 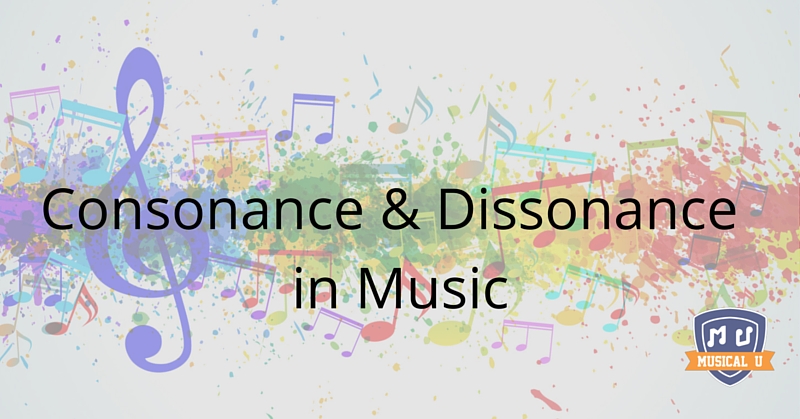 Take a moment to think about one of your favorite songs. Chances are, you like this song because it sounds pleasing to the ear and is relatively “easy” to listen to, right?

Of course, not all songs fit the standard easy-listening mould. Have you ever heard a song that just felt sort of “off”? One that wasn’t particularly pleasant-sounding, or even one that was downright hard to tolerate?

If so, you’ve already experienced the drastic difference between consonance and dissonance.

The Role of Consonance and Dissonance in Music

The terms “consonance” and “dissonance” refer to the types of sounds created when notes are played together.

For example, when you play a harmonic interval, the two notes can either flow together smoothly and seamlessly, or they can clash and compete. Naturally, these two alternatives can create very different musical moods and as a result, very different experiences for listeners.

Consonant musical sounds are often described with words like “pleasant”, “agreeable”, “soothing”, and “melodious”. In other words, notes that sound comfortable when played together are considered consonant.

The commonly-used “perfect” intervals and major and minor thirds are all consonant, and the vast majority of people would agree that this sound is generally satisfying and enjoyable to hear. This explains why these types of interval are used so frequently in many of today’s popular hits. Similarly, the chords which feature just these intervals (such as major and minor triads) all sound consonant.

One of the key things to note about consonant sounds is that they sound very stable; you don’t feel any anxiety if the music doesn’t change because there’s no feeling of needing the sound to be “resolved.”

Conversely, dissonant musical sounds can be described as “sharp”, “jarring”, “unnerving”, or “unsettling”. This is because dissonant sounds create tension that the listener naturally wants to hear released (or “resolved”).

Intervals such as seconds, sevenths and the tritone have a dissonant sound, as do the chords which feature them, such as jazzy seventh chords and the diminished triad.

The theory of tension and release in music is actually what makes many of today’s popular songs so catchy; however, when this built-up tension isn’t released, the experience can be quite unpleasant for many listeners since there’s no relief from the edgy, harsh tones.

However, dissonance isn’t just a term to describe music that doesn’t sound good… far from it, in fact! Classical musicians and jazz musicians are known for strategically using dissonance in their music to create rich, emotional, and moving pieces.

The Relativity of Consonance and Dissonance: A Matter of Opinion

Arnold Schoenberg, an Austrian composer of the late-19th and early-20th centuries, has come to be known as one of the most influential composers of his time due to the heavy dissonance he injected into his compositions. However, while many of his peers and successors heavily praised his unique style, an equal number strongly opposed and criticized it.

That’s because in the end, the concepts of consonance and dissonance are highly personal and can change dramatically in various contexts. What one person finds displeasingly dissonant, another may find exciting and interesting. Similarly, variables such as musical genre, timbre and tone, and the environment where the music is being performed can all influence the perceived consonance and dissonance of musical pieces.

Additionally, both consonance and dissonance often work best when they’re used hand-in-hand. Music that’s too consonant may feel like it’s lacking the spice and variety of dissonance; while music that’s too dissonant may be unejoyable or annoying to listen to since the tension that is created is never properly resolved.

By understanding how consonance and dissonance affect musical compositions both individually and when paired together, you’re one step closer to mastering how music works, and creating and performing songs that showcase your unique musical style.

What questions do you still have about consonance and dissonance?

Which types of sounds do you prefer: consonant ones or dissonant ones?