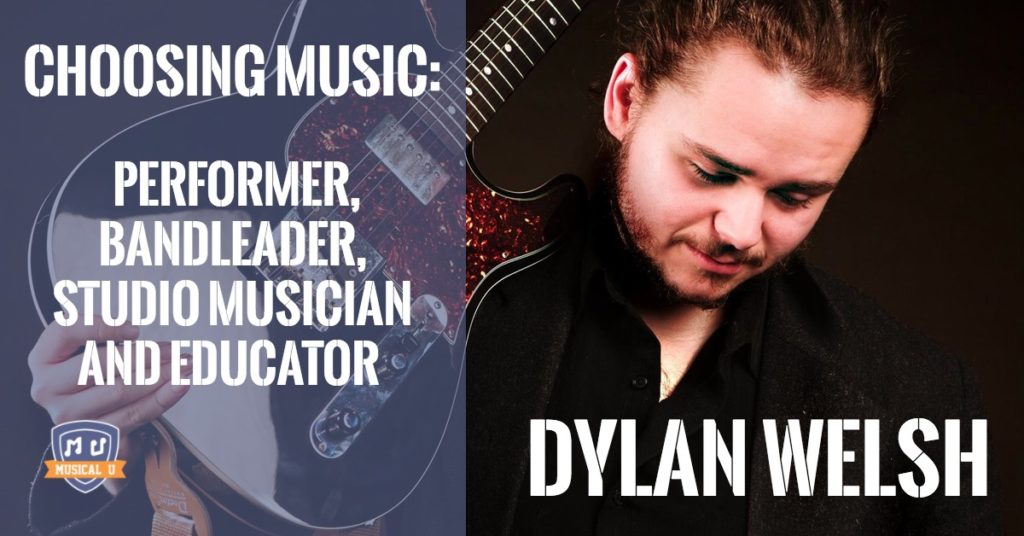 At 21 years old, freelance guitarist, bandleader, arranger, and music educator Dylan Welsh is already an eight-year veteran of the vibrant Seattle music scene. When he was still too young to hang out in bars and network, internet-savvy Dylan built a career by creating an online presence that now includes remote session work, Skype lessons, arranging/chart preparation and more. He is also available for international fly-out dates and touring.

We sought him out after being inspired by his work ethic and success. In this interview, we also learned that his wisdom extends far beyond his years.

Q: Tell me a little bit about how you got started in music, how it all began for you, and what the first steps were.

My dad is a guitar player, visual artist, writer—just a bohemian in general. Musicians, poets and writers were always coming through the house. A lot of dad’s friends were professional musicians, and they saw that I was playing guitar and helped me out.

I played my first club date when I was 13.

Q: Do you remember where that was? Yeah. It was at a little venue in Seattle called The Vera Project, which is still there. Great venue. I played there a million times after that.

By the time I was 16, I’d been on tour twice. I’d played most of the festivals in the Northwest, most of the venues, and was playing in a couple professional groups around town. It was pretty obvious for me, from my teen years, that this was really what I wanted to do.

Q: That’s such an inspiringly young age to get started at. How much of your teenage success comes down to talent, and how much was hard work and putting in the hours?

That’s something I have spent a lot of time thinking about recently. Some people are natural painters or natural mathematicians. Maybe I was a natural musician, but I was also practicing two or three hours a day. That’s what I tell my students. That’s what it really comes down to in the end.

Q: When you add that together with all your gigs, that is quite a bit of time outside to put in. How did you juggle music and school? It didn’t start to be a problem until 10th grade.That’s when it all started clashing together. We’d be playing at the bars until one or two in the morning, and I’d end up sleeping through my first couple of classes. It was messing with my mental health—not doing well in school was really hard on me.

My teachers had some words for my mother. She thought it was hilarious. The next year, I was able to start community college early and work my schedule around my music. That saved my life.

Q: You’re a multi-instrumentalist—particularly versatile across different styles of music and different playing situations. Is that something that started back in high school, or more recently?

That’s because of what I was doing as a teenager. I was just so excited about it. I wanted to be playing out five nights a week. I started picking up random instruments that my friends needed in their bands. Spreading myself so thin did affect my guitar playing a little bit, but ultimately I’m glad it happened. Drums, keyboards, bass—and I still take gigs on the viola and mandolin.

I was very fortunate that I had access to a lot of professional musicians that were friends of mine, friends of the family, and that I was able to have mentorship for any instrument that I would ever want. Of course, having a good music education is huge as far as being able to flip styles. If you’re an educated jazz musician, you can fake almost anything.

Q: You mentioned something really interesting there, which is mentorship. I was going to ask what musicians had been an influence on you, but maybe the two are tied together there.

When I was growing up, I’d be in the car with my mom and Santana’s comeback album “Supernatural” was blaring on the radio all day. That was the first time I heard lead guitar—that beautiful Santana tone. I was like, “Oh man, that is the coolest thing in the world. I want to do that.”

After that, I was into David Gilmore for a long time. I was a metal-head for awhile; I liked Randy Rhoads a lot, and Megadeth. Then I remember the first time I heard Yngwie Malmsteen, that was huge for me too.

In my own life, I had a bunch of local dudes that were nice enough to take me under their wing. There’s a guy name Ben Barnett who’s in a popular underground band called “Kind of Like Spitting.” He was my first guitar mentor, and showed me all the big building blocks that I really needed.

I had a bunch of really important mentors at Berklee. Dave Tronzo was amazing, he’s an avant-garde free jazz guitar player—he just knows everything there is to know about the instrument. When I returned from Boston, I used to follow Tim Lerch’s videos for a long time and then I found out that he lived in Seattle. I was like, “Ahhh.” I emailed him right away, “Please, do you have any lesson openings?”

Q: After that return from Berklee, how has your career progressed from there? What’s that look like?

I came back from Berklee in a weird place. Out of money, family drama…I got home and I was like, “Okay, hopefully this music thing works out. I’m going to find a day job, and then maybe down the road I can push the music thing again.” What it came down to is, no one would hire me. I hadn’t finished my degree. I was a little bit picky. I didn’t want to flip burgers or anything. I wanted to do something a little more interesting than that. No one wanted to give me a job. I was like, “Well, okay, I guess I’m just going to have to start pushing the music thing now.”

“What you have to realize is there is a lot of money in the music industry. It’s out there. You just have to be able to advocate for yourself and stand up for it and demand it. Musicians help musicians. Get out there and make good friends with some good musicians who are on the same path as you, that is huge.”

It was tough. I could play the bars, but not old enough to hang out yet. I couldn’t go to the jam sessions around town and go network with the other local musicians. That’s when I focused on whatever other hustling methods I could. I built my website, and honed in on my SEO skills. I built profiles on some other musician classified sites, to see what was out there.

I scanned Craigslist every day to see if anything good popped up. I was cold-emailing a lot of people, just people that I knew who were friends of friends, being like, “Hey, I’m back in town,” or, “Hey, I’m a guitar player and I know this guy. I was hoping you might have a gig for me. Here’s my info.” Doing whatever it was that I could do to meet other musicians and get work.

I also worked for a pretty popular music blog, which saved me financially while I figured things out musically. It was a lot on my plate.There was about a year where I was not really sleeping.

You have to be crazy to do this for a living, but for some people, it’s worth it. For me, it’s definitely worth it. It’s gotten better from there. Two or three years down the line since I’ve moved home, and I’m not worrying too much about finding work. I’m at the point right now where I’m just barely stable.

Q: Was there a particular moment where you felt like, “Okay, I’ve made it”?

No. I wouldn’t necessarily say that because I’m not making a lot of money, but I’m making just enough money to get by. I keep pretty detailed spreadsheets about my finances. I remember looking at my spreadsheet and seeing how much I was making month to month to month, and I realized, “Hey, I’m pretty much hitting the same number every month. That’s really cool.”

Q: You were explored a lot of music avenues. Is there one gig or one project that really stands out as particularly interesting?

There was this really fun, classic progressive rock band. It was all original music for the most part, but it was in the vein of Yes or King Crimson or Genesis. It was a six piece band with a bunch of visual effects and costumes. Everyone had all this crazy equipment and we were playing multiple instruments. The arrangements were really intense. I did a little bit of road work with them. That was a lot of fun.

Before I went to Berklee, I didn’t play jazz at all. I remember getting home and playing my first jazz combo gigs and just being terrified. It took some getting used to.

Q: You have managed to hustle and cobble together a career in music, which is something a lot of young people dream of. Do you have any advice you’d offer to someone who wants to have that same professional career as a musician?

A lot of people will tell you it’s impossible or it’s not worth it. I certainly had a lot of people in my life who would do that. I still have old girlfriends that will tell me, “When are you going to get a job?” What you have to realize is there is a lot of money in the music industry. It’s out there. Advocate for yourself—stand up for it and demand it. Musicians help musicians. Get out there and make good friends with good musicians who are on the same path as you, that is huge.

You won’t always find it where you think. When I started out, it was always about playing live. Now a substantial part of my income comes from teaching, arranging, and session work.

Other than that, learn to say “no”. The moment I stopped being asked to play free gigs was the moment I started saying “no” to free gigs. Same is true for all the low-dollar gigs I’m saying “no” to now—finally! It’s not like they’ll resent you. If you want to do this for a living, you have to start saying “no”. That’s one of the most important things I’ve learned: not to just totally overload yourself and be picky about what you say “yes” to.

Are you still dreaming of a musical career that hasn’t happened yet? Take inspiration from Dylan Welsh: take steps every day to make your dreams come true!