Home » Children » Should We Put Children in Music Lessons or Sports Teams?

Should We Put Children in Music Lessons or Sports Teams? 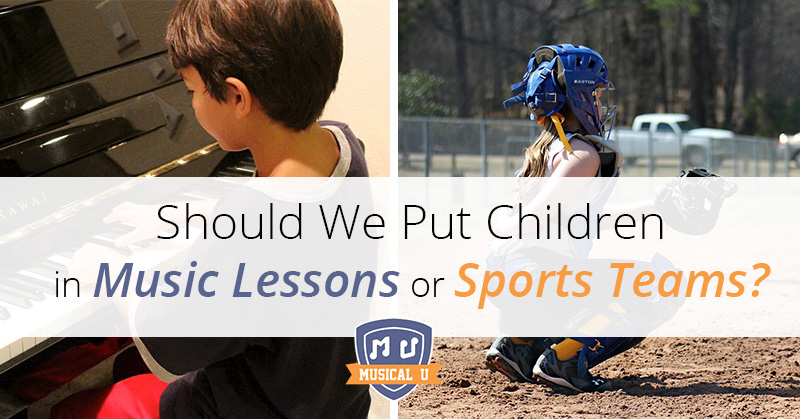 As a parent, you want your child to develop to the best of his or her abilities. So when it comes to enrolling your little one in sports or music classes, you may find yourself a little torn.

On one hand, joining a sports team brings a myriad of benefits. There’s the sense of camaraderie, a lot of fun, and then there’s the technical stuff: increased coordination, balance, and leadership skills that develop as your child learns to run, throw, and catch.

Music classes, it turns out, also deliver a variety of benefits. Children learn cooperation, active listening, coordination, and other skills when learning to play an instrument. When choosing between the two sides, understanding the advantages of music versus sports is essential for you to make the best decision possible for your future star.

Music classes teach children to think creatively by expanding their imagination. Whenever your child faces a difficult decision later in life, music (and to be fair, sports) may help him or her think outside of the box, thus coming up with a viable solution.

Music has also been shown to increase intelligence. That’s right: in a study conducted at the University of Toronto at Mississauga – published in the 2004 edition of Psychological Science – researchers found a small increase in IQ of six-year-olds who enrolled in regular voice and piano lessons.

In fact, children have shown increased intelligence (up to 2.5 IQ points) after taking music lessons for as little as a single year. Students have also shown enhanced scores on college entrance tests, such as the SAT.

You may be surprised that sports aren’t the only activities that help in the physical skills department. Playing certain instruments, such as the drums, can also help with coordination as the hands, arms, and feet must work in unison.

Drums and other percussion instruments also help with timing, which can prepare children for other hobbies such as dance and – you guessed it – sports.

Traditionally, if you wanted your child to be social, you would enroll him or her in soccer or some other sporting activity. We now know that group music classes also encourage peer interaction and communication; teamwork is as much a part of music as it is in the sporting community.

Playing music with others involves group interaction and problem solving. If your child is playing too loudly or too quickly, he or she will need to adjust in order to play along with everyone else. Children in music groups also learn to give and receive critical feedback in a constructive way.

You may think sports are the activities to turn to if you want your child to learn discipline, but music can also teach your child this important skill. Learning an instrument requires regular and focused practice. When playing with a group, your child will learn to listen to others until it is his or her turn to join in. This shows patience and respect for peers as well as the ability to sit still and be attentive.

Both Music and Sports Can Be Beneficial

Joining a sports team can be fun, but so too can learning how to play an instrument. Who is to say which one is better? Both sports and music enhance learning and self-esteem, and both require teamwork. So it might be best to enroll your child in both and let them decide which one he or she prefers.

After all, if you want your child to develop to the best of his or her abilities, it’s wise to take a step back and let them shine without applying too much pressure of your own.

Looking for something to help you along in your musical journey? Join Musical U today for access to helpful modules, active discussion boards, and a supportive community of like-minded musicians.