Can’t Improvise? There’s just one thing holding you back

by Musical U Team | Podcast, Improvisation 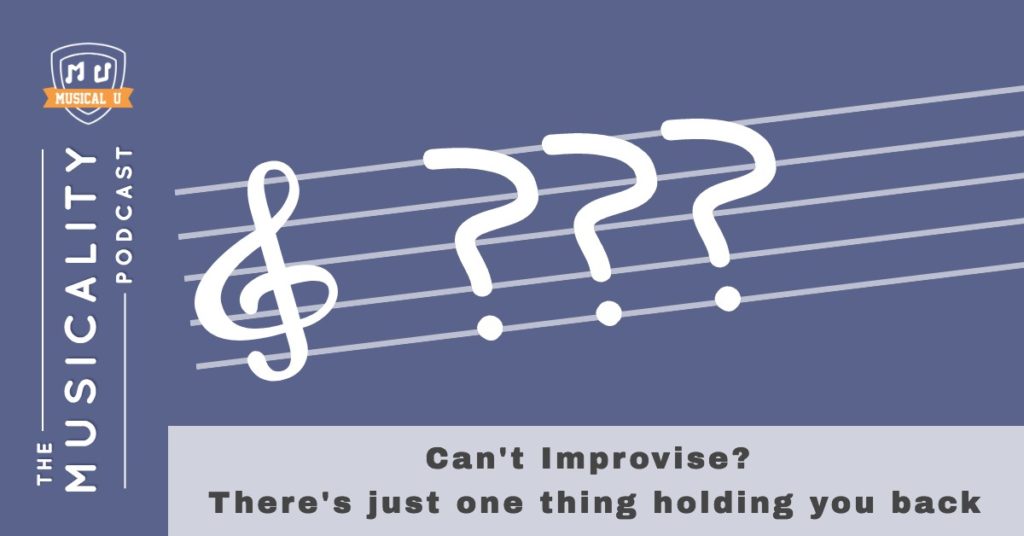 Does the idea of improvising scare you? Have you given it a try but quickly decided you didn’t have what it takes?

If so, that’s understandable. In this episode, we’re going to talk about where that fear comes from, how you can overcome it, and how to make it easy to learn to improvise.

Hi, my name’s Christopher Sutton and in this video I’m going to help you recognise and overcome the one thing that’s preventing you from learning to improvise.

In a minute I’m going to talk about where that fear comes from, how you can overcome it, and how to make it easy to learn to improvise.

But before we do that: why does improvising matter, anyway?

Did you know that most musicians can’t improvise?

We’re kind of used to that so it doesn’t sound too shocking. And it’s why you might not have worried too much about the fact that you can’t do it.

But imagine if most people who spoke English couldn’t come up with their own sentences or have a conversation. That they could only recite phrases and scripts they had carefully learned before, word by word.

Imagine if *you* could only speak like that, unable to express your own ideas, stuck with the strict sequences of words you’ve learned by rote or read from a page. You can say “Where is the bathroom?” or “I have a blue pen” – but that’s it.

It would be incredibly frustrating – because you know what truly speaking a language is meant to be like, where you can imagine a thought and then express it easily through words.

Whether you’ve known it or not, this is exactly the situation you’re in with music if you can’t improvise.

Now I’m not going to tell you that you *should* improvise, and I’m definitely not saying that every musician should be up on stage taking a solo. That’s totally up to you.

But I hope that the language example makes clear why at Musical U we *do* think every musician should learn to improvise. Because it’s a deep part of feeling truly musical and enjoying music to its fullest.

Improvising can be learned – and in a fun, easy way.

In fact, the only thing truly holding you back from improvising is: fear.

Improvising is scary! Why is that?

Well, if you’re like most musicians you’ve been focused on instrument technique and learning to play particular pieces from sheet music, chord charts or tab.

This ingrains in us a mindset that notes are “right” or “wrong”. If you play the wrong pitch or you play a note at the wrong time, you’ve made a mistake. And mistakes are something to avoid, regret, and work hard to prevent in future.

That’s great if your goal is to be a perfect music-playing robot.

But there’s no real freedom there.

When you force music into that “right or wrong” framework you crush any possibility for creativity. And that means you’re missing out.

Let’s come back to the language analogy for a second. The one advantage of being restricted to only saying learned phrases and scripts is that it’s relatively low-risk. You can practice those specific sequences of words and be confident you’ll say them right.

To move beyond that you need to be willing to break things down into small blocks, learn how the blocks fit together, and start trying to assemble your own creations.

As a language speaker this means sometimes you’ll use the wrong word or say something that doesn’t quite make sense.

You have to risk sounding a bit odd to begin with!

But I’ll talk in a minute about how to minimise that downside – and the point is that the payoff for taking that small risk is huge.

Because not only do you get this new freedom to create your own ideas.

There’s actually something else even bigger you’re missing out on.

If you’ve studied a foreign language you’ll know: there’s a magic stage of learning where you actually start to think in that language. It’s ingrained so deeply in you that you instinctively know how to bring new ideas out into the world in that language.

Music can be like that for you: to imagine your own creative ideas and bring them out into the world for others to hear and appreciate. But the only way to get there is by embracing improvisation.

So let’s talk about that painful point: the dreaded “making a mistake”.

There are two big things to address here.

The first is a mindset shift. At Musical U we call this “taking on the improviser’s mindset”.

The improviser’s mindset is that notes aren’t right or wrong. The only thing that matters is what sounds good to you – and, crucially, that if something *doesn’t* sound good, it’s not the end of the world. It’s not even the end of the performance.

You can learn a variety of strategies and attune your ears and musical instinct to quickly turn any “wrong” note into something that sounds great – and might even convince your listeners you did it on purpose!

Making that mindset shift is a critical step in learning to improvise. But even without fully adopting that “apparent mistakes are okay, there’s no such thing as a ‘wrong note'” mentality, we can reduce or even remove the pain of playing a wrong note.

How? By giving yourself the opportunity to experiment in a zero-risk way.

Practice improvising when nobody can listen. If nobody’s listening, is there any real problem if you play a note that sounds bad?

Well, okay, actually I lied. It’s not quite zero risk – and that’s because we’re never truly alone. We are all always accompanied by that inner voice of self-doubt, our inner critic, our ego. The voice that feels shame when you get a note “wrong” or your playing sounds less polished than you had been proud to accomplish in the past.

To open up the amazing world of improvisation you need to be willing to set aside that inner critic – even if only for a few minutes.

To do this simply tell yourself: I’m going to spend a few minutes experimenting. I’m not expecting myself to be amazing and I’m certainly not expecting every note to sound amazing. I expect some things will sound bad or wrong. That’s how I’m choosing to spend my time for the next few minutes.

In my experience and for our members at Musical U, going into it with that explicit intention can be really effective for setting your ego aside and separating the learning of improvisation from the high-accuracy playing and performance you’re normally focused on in your music practice.

Now if you’re looking for the practical specifics on how to get started improvising we’ve got plenty of material at Musical U that can help you with that – both the full training inside our membership and some free resources to get you started. I’ll have links along with this video to get you going.

But before any of those practical tips can be useful to you, you’ll need to shake off the fear of improvising.

So first, give yourself the space and time to learn to improvise and tell yourself very clearly: I’m choosing to do something where I won’t sound so polished and accomplished, where I expect to make mistakes and that’s part of the process.

Once you’ve set aside that inner critic you’ll be able to begin exploring this new skillset – and gradually you’ll grow into the improviser’s mindset, where you truly know that there’s no such thing as a “wrong” note and you can freely create and express your own musical ideas in any situation with confidence.

Want a clear, step-by-step guide to getting started with improvising, which works for any instrument or genre, with no prior knowledge or special skills required? Get our 5-Day “Intro to Improv” Practice Plan for free, just click the link or visit the shownotes for this episode at musicalitypodcast.com.