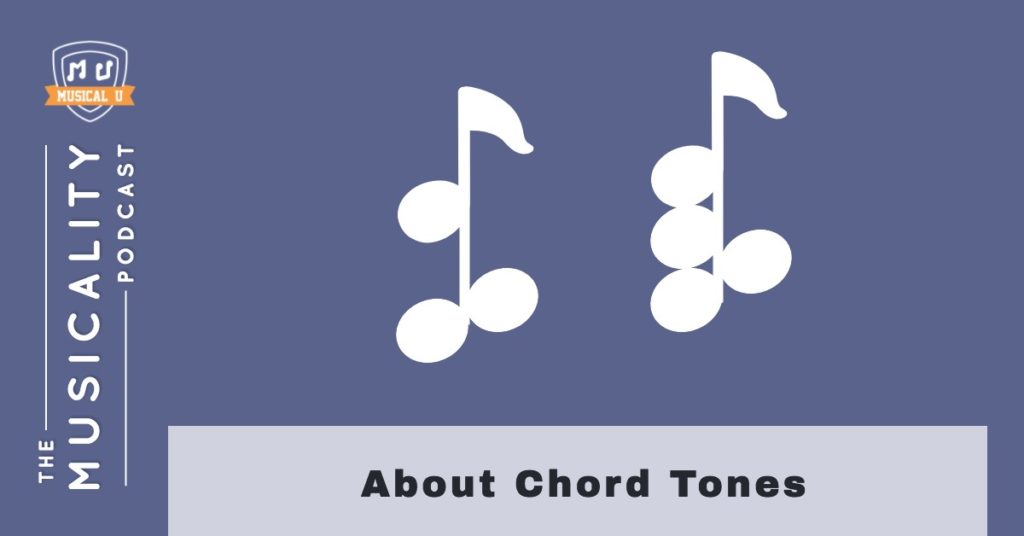 Learning and understanding chord tones will help you create memorable melodies with tension and release and solo over existing progressions. This in turn will help you play by ear, improvise, and write songs – enabling you to choose the notes that sound the best, rather than using trial-and-error to form your chords and melodies.

In this episode we’re going to be talking about chord tones, something which came up in my recent interview with Meghan Nixon of HowToSingSmarter.com.

Depending on the instrument you play and the way you play it, you might be very used to thinking about chord tones – but most likely you aren’t, and you may be missing out… As Meghan explained, chord tones can provide us with a helpful framework for playing by ear and improvisation, letting us choose notes that are musically meaningful in the harmonic context. Whether you play piano, guitar, saxophone or sing, whether you want to play by ear, improvise or write music, this is a really powerful concept to get your head around.

I’m going to talk a bit about chords and chord tones, then demonstrate why this concept of chord tones is useful, and then talk about how you can get started using this yourself.

The concept of a chord is very useful: it gives us a single clear label to mean a whole group of notes. We can say “the chord progression goes C, F, G” and we’re actually communicating about a whole bunch of notes that are to be played, to create that harmony.

But this is the drawback of the simplification too: it leaves many musicians almost oblivious to the fact that chords are made up of individual notes. Sure, we all know intellectually that this is what’s going on. But when we listen to or play music we often think of chords as whole, solid things, and we miss the point that there is a lot to be learned from thinking about them in terms of their individual notes too.

In fact, I think pianists and jazz musicians are the only people who do generally think about the individual notes of chords. Even guitarists who play a lot of chords tend to think about a chord as a certain fretboard shape and it’s only the more advanced players who start digging into that and exploring where those shapes come from and what else can be done with them.

Before we go any further: what do we mean by “chord tones”? Well, as we talked about back in episode 5 on half steps and whole steps that word “tone” can be confusing! We’re not talking about the interval of a tone or a “whole step” here. We’re using the looser meaning of “tone” to just mean “note”.

So “chord tones” are simply the notes present in the chord. If we imagine a line of a song where a single chord is playing, and we’re trying to play the melody by ear, or choose notes for an improvised solo, we might initially be considering all the possible notes in the key, all the notes that belong to the scale. But we can also ask: which of those notes are being used in the current chord?

Here’s an example. I’m going to play a scale to give you an idea of the key we’re in, and then I’ll play a chord in that key.

Now I’m going to play the scale again, with the chord as a harmony underneath. Try to hear which notes from the scale belong to the chord.

Could you hear how some of those notes matched up and felt relaxed and comfortable, while others created more tension? None of them sounded terrible or out-of-key, but there were definitely some that went better with the chord.

Now you might be thinking “Well, duh, that’s why it matters what chords you choose for a song!” and that’s exactly right. If you’re starting from a melody then yes, you can choose the chords based on which will harmonise it nicely.

But the key thing to understand about this idea of “chord tones” is that the reverse is true too.

If you’re starting from a chord progression, then you can go a long way in understanding the melody or what improvisation will work by thinking about the chord tones present.

As you just heard, some notes will fit in really comfortably while others will create tension. And so by choosing your notes based on hearing whether they belong to the chord or not, and if they do which note of the chord they are, you have a huge shortcut to picking the “right” notes for playing by ear or improvising a solo.

How to Use Chord Tones

So how can you get started taking advantage of this? Well, that’s going to depend a bit on your musical life, but step one is going to be to get your brain and ears familiar with what’s going on.

At Musical U, in our chord ear training modules one of the key things we help people do is get past that stage of hearing a chord as just a single blur of notes, and be able to dissect them aurally into each note, so that you can hear both the overall sound and each of the notes present. That’s a key skill if you want to make use of chord tones by ear. Without that you can still proceed using your brain and knowing in advance what the notes of the chords are, but it’s really best if you can bring your ear and brains to the task together!

Once you’ve done a bit of groundwork to get your ears dissecting chords, start with simple songs. Pick a song that uses just three or four chords, ideally the I, IV, V and maybe vi. If you don’t know what I’m talking about there, I’ll put a link in the shownotes to explain! I’ll also include a backing track or two where it’s just simple chords you can experiment over.

Next, simply spend some time playing along with the song making use of those notes. Your goal is to be able to actually hear how those notes are present in each chord. You might start by just playing the root note of each chord, then play the arpeggios (meaning each note in turn, lowest to highest and back again), then start experimenting a bit with little melodies based just on the chord tones.

From there you can move into playing by ear if that’s your interest, using these chord tones to give you an insight into which notes are being used in the melody. Can you hear where the melody blends well with the chords and where there’s more tension? You’ll often find that phrases start and end on a note from the current chord but might draw on other notes from the scale in between.

We have a great tutorial by guitar teacher Brad Mavin on our site which walks you through using this chord tones approach for a pop song, I’ll put a link in the shownotes. There are some guitar specifics but I think it can be applied for any instrument.

Or if you’re more interested in improvisation then your next step is to explore how you can shape your phrases by choosing notes which do and don’t belong to the chord. This is a really great way to quickly get that powerful tension and release in your solos. Which notes can you linger on to create a clashing sound that demands resolution, and which note do you need to move to, to create that release? The chord tones have the answer.

This is a key technique for jazz musicians who will improvise a solo thinking almost entirely about the chord progression rather than the key. The key and its scale alone don’t really reveal the complex harmonies going on in a typical jazz standard, but following the chords can reveal the notes and scales you need to use to create a dynamic and powerful solo that matches the song well.

This was the context where Meghan was talking about it: as a singer if you need to improvise it can feel a bit overwhelming. You need to really hear the notes you choose before you sing them and getting your ear around the chords makes it far easier to narrow it down to the notes which are going to sound good. It provides you with a kind of palette of sounds that you can then draw on to shape your solo.

So that’s what you need to know to start making use of chord tones. It’s a pretty simple idea: that we can approach melodies and solos based on the chords – and learn a lot from which notes belong to the chord and which don’t. But this simple mindset shift can have a big impact on your success in playing by ear, improvising and simply understanding how music fits together.