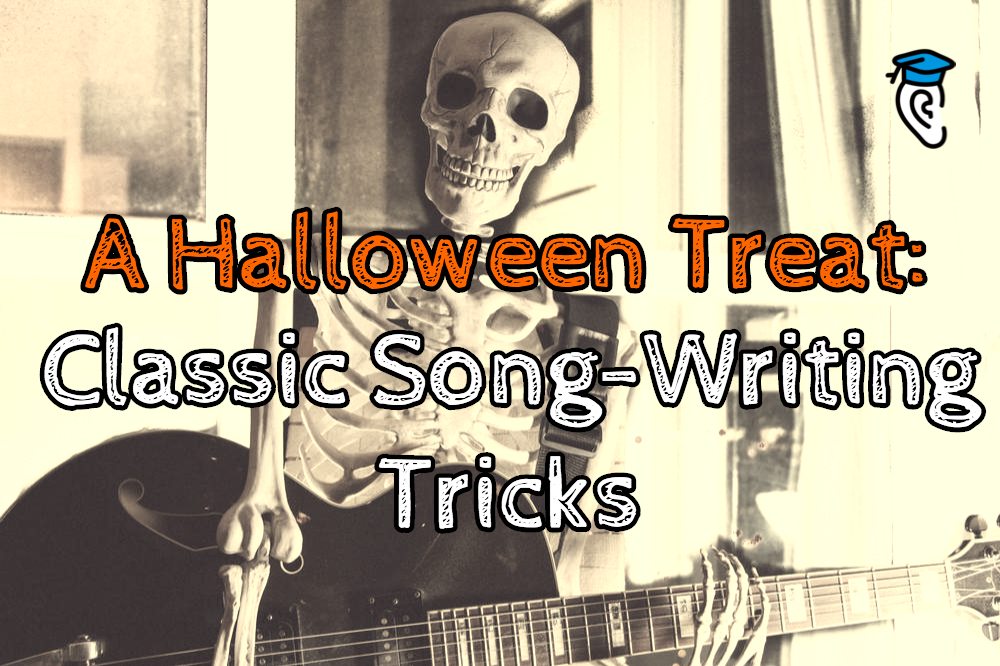 Wish you had some fun new Halloween music and an easy way to train your musical ear in suitably spooky style this October? Look no further than John Anealio’s Halloween E.P. Let’s listen together and see what musical mischief might be lurking in its four tracks…

You may remember John Anealio as the composer of the beautiful and relaxing instrumental track Echoes of Espers in our recent article “Open Your Ears to 5 Kind of Soft Songs”, but did you know he’s also a talented singer-songwriter who writes nerd-culture inspired songs about topics like steampunk, Game of Thrones, Lego and superheroes? Like ‘Weird Al’ Yankovic and Jonathan Coulton he’s a master of gently playing with song-writing traditions to create catchy-yet-subversive tunes that sound instantly familiar while totally distorting the norms of pop and rock lyrics.

John has a terrific E.P. of four Halloween songs and as we head towards the climax of this scary season it seemed like a great opportunity to sit back, practice some active listening and discover some of the tricks used by song writers. Join me!

1. A Stormtrooper For Halloween

A flanger effect sets the spacey tone from the start before an acoustic guitar plays broken chords waiting for the vocals to start.

The chord progression in the verse conveys a melancholy wistful feeling which suits the lyrics perfectly as the singer remembers the best Halloween costume he ever wore. You can immediately hear there’s something interesting going on, this isn’t a standard 1-4-5 progression. It’s a sequence of four chords and the third one somehow adds a bright and hopeful moment – can you hear it? It’s using a “borrowed chord“, the ♭VII, for a I-vi-♭VII-V progression. We’re in the key of B Major so that’s B-G♯m-A-F♯. Listen for this ♭VII chord coming back at the end of the chorus to again introduce that hopeful-sounding moment.

Partway through the second verse a bass guitar is added (1:30) which adds some weight to the sound and provides variety, keeping the song moving forwards. If you listen carefully, the bass is present in the chorus too, but it’s less prominent behind the distorted guitar.

Listen to how a drumroll is used (2:25) to build excitement in the bridge before the final chorus. This chorus is repeated twice, with an electric guitar joining the arrangement for the second time through.

To my ear the song ends in a gently unresolved way. Listen for the high electric guitar holding on to the root note of the V chord in the final V-I transition. Although the song ends on the I in the normal way and you could consider this normal voice leading (because that note does belong in the I chord), that high electric guitar holding strong makes it almost sound like the song ends on the V chord – leaving the story feeling like it’s not quite over yet… Maybe next Halloween?

The intro to this sound builds gradually, from a growing electrical thrum through haunting high quick synthesiser swoops to a drum kit, bass and guitar joining in to bring the song to a rocking start.

Things get a notch edgier when a distorted guitar brings in the chorus (0:48) and slides through some swooshing chords to accompany the vocal refrain. Crashing cymbals add some drama contrasting with the light hi-hat pattern in the verses. Listen to the bassline walking down the scale from the root of the V chord to the root of the I chord to start the chorus – it’s a common device in music and we’ll hear it again in the next track.

Listen for the momentary breakdown (1:25 “When they went on their honeymoon”) after the chorus which gives the new verse room to make its mark with almost-solo vocals.

Unlike the first track, this one does use a simple 1-4-5 progression in the key of C Major, though the verse pattern is slightly unusual: IV-I-V-vi (F-C-G-Am). The chorus is then I-IV-I-V with a quick IV-V-I turnaround at the end.

At 2:40 there’s a key modulation to change the mood for the bridge (“It ain’t easy…”), moving up a minor third from C Major to E♭ Major and then following roughly the verse progression of IV-I-V-vi.

Listen for how the harmonies at the end of the bridge lead back to the original key for the final chorus. You’ve got to love a song which applies boy-band harmonies to the phrase “Why is she a necrophiliac?”

The final chorus starts out with the stripped-down sound used at the start of verse 2, before that distorted guitar kicks in to accompany and then wrap up the song with a neat little riff leading upwards to end on the tonic (I) chord.

The song kicks off with a solo drum lead-in, playing the “4, 5, 6” of a 6/8 time signature, similar to the classic Heaven Knows by Squeeze. Then, like an opera overture, a slide guitar teases the chorus melody before we ever hear it.

The overall arrangement is a classic rock combo: vocals, guitar, drums and bass – but with the introduction of a variety of synthesiser parts giving it a modern, almost sci-fi feel. Some are sustained organ tones, others are brief blippy decorations (e.g. 00:45) and there are some string-like accompaniments too (2:00).

Listen to the lead-in to the chorus at 0:45, how the guitar maintains the same chord while the bassline descends. This descending bassline from the V chord to the I chord (playing down the first five notes of the scale from so down to do) is a very common pattern in pop and rock and we heard it in Undead Love Song too.

In the chorus listen for how the lead singer also provides a vocal harmony above the main sung melody. Often this would be mixed as quieter, behind the main vocal line – but in this case it’s roughly the same volume, making it almost a duet by (evil?) twins.

The slide guitar from the intro returns to accompany the vocals in the bridge (2:40) and then gets its own solo (2:57). This could be a guitar played with a slide or even a pedal steel like is often used in country music. Listen for how it sweeps across an octave (F to the F above) to complement the vocal melody at 2:50.

At the end of the song listen to how the repeating ♭VII-IV-V sequence and active synthesiser part bring a new energy to provide an uplifting finish to the track.

This song immediately conveys a classic country feel, with a guitar strum based on a boom-chicka pattern and a harmonica playing the intro and mid-song solo.

It’s a stripped-down instrumentation: just vocals, guitar and tambourine, with a few moments of harmonica here and there.

The lyrics are packed with spooky characters and Halloween haunts, totally at odds with the laid-back and comforting sound of the arrangement! I was reminded of the ironic and nostalgic Weird Al song “Good Old Days”.

Listen to the final quick I-V-I turnaround at the end – a deservedly popular “ta da” kind of song ending which you can easily introduce to your own song-writing and performances.

I hope you’ve enjoyed exploring these fun Halloween songs and discovering some classic song writing tricks. Be sure to visit John’s website where you can purchase your own copy of the Halloween E.P. and find many more fantastic songs to enjoy and learn from.