Home » Career » The 6 Biggest Misconceptions About Being a Musician

The 6 Biggest Misconceptions About Being a Musician 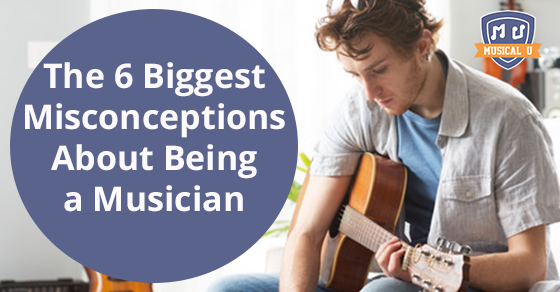 Being a musician is incredibly rewarding, but it can also be a challenge. Folks who haven’t taken the time to study music or learn to play an instrument don’t quite understand the intricacies that go hand-in-hand with being a musician.

1. You have to be super talented.

As we’ve discussed on the Musical U blog before, talent has nothing to do with musical ability. In fact, time trumps talent every single time. It doesn’t matter if you’ve been playing for five minutes or five decades, you don’t get to be “good” if you haven’t put in the time. Practicing is essential to improve your skill, no matter what you’re trying to improve.

2. You have to study music from a young age to be “good.”

There are plenty of people who have decided to pick up instruments, or build on personal interests they’ve held in the past, that did not study music as children. No one is too old to begin taking music lessons or studying music. On the blog, we’ve discussed why age shouldn’t be a factor in your decision to begin studying music.

There are plenty of musicians who can read sheet music but struggle to translate something they hear into a song they can play without the aid of a score or chord reference. There are others who excel at hearing and replicating what they hear but struggle to understand the intricacies of scored music or chord progressions.

Either way, there are pros and cons on each side for doing it only “one way.” However, wanting to play by ear is nothing to be ashamed of and doesn’t change your musical ability. It all simply depends on what you want to accomplish as a musician.

4. You have to be very creative to be a “good” musician.

Studies have shown that listening to and playing music can have some effect on cognitive functioning and creativity, but do you have to be oozing with creativity in order to be a “good” musician? Not really.

Plenty of musicians simply enjoy playing music that has been written by other musicians and don’t have a strong desire to create their own unique songs. Just because someone doesn’t feel a need to create new tunes doesn’t make them less of a musician than someone who enjoys composing. Again, it all comes down to what you want as the budding musician.

5. Choosing to “self study” instead of taking professional lessons is a musical death sentence.

Professional lessons have an important place in learning music, but this is certainly not the only way to learn an instrument. Some people need the accountability of meeting with a teacher weekly and the structure of set practice times. Others hold themselves accountable and are happy to make time to practice and learn at their own pace with the help of books, online programs, or communities like Musical U.

Whatever works for you is the option you should choose. If you’re not interested in spending money on private lessons, you may find that you can gain just as much (or more) by studying on your own.

6. Practice isn’t terribly important because you’re not trying to become a professional.

No matter what your motives are for learning an instrument, practice is a non-negotiable. As we mentioned earlier, talent isn’t a key indicator of your musical ability and eventually, will only carry you so far. Practice must be a part of your routine if you plan to improve, no matter what you plan to do with your strengthened skills. You may not be hoping to sell out concert halls and stadiums, but you do have to put in the time if you want to get better.

You may have several reasons for studying music, but regardless of the motives, there are certain things your friends and peers may tell you when they find out you’ve begun to study music. Don’t let misconceptions like these 6 hold you back from achieving your goals. Instead, face them head-on – and then change the perception of those around you.