5 Key Skills to be Musical 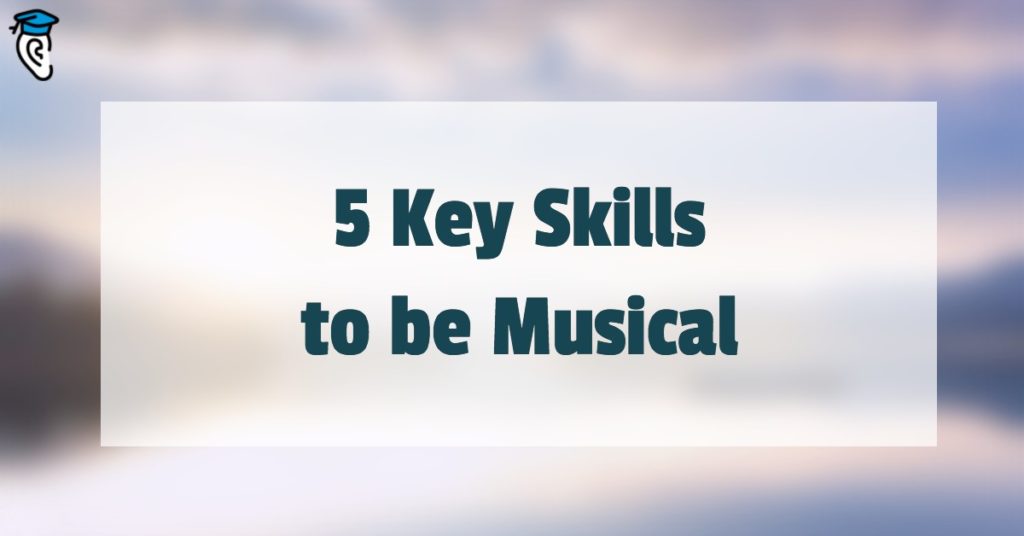 Becoming a musician means much more than just learning to play an instrument. There are a wide variety of skills involved in learning to become a capable and versatile musician beyond mechanical abilities and understanding music theory. In fact, in today’s world playing an instrument may not even be necessary at all!

Dr. Chad West is an Associate Professor and Chair of Music Education at Ithaca College, and also frequently presents papers at conferences. In one of these papers, Dr. West compiled what he describes as the five core skills of musicianship. We recently had a chance to ask him about these important skills and the evolution of what it means to be “musical”.

The “Big Five” Skills of Musicianship

We were truly inspired by the article Dr. West wrote about the “Big 5” musicianship skills, as it closely aligns with our philosophy at Easy Ear Training. Both we and Dr. West believe that music teachers should strive to develop the internal musicianship of students, not just the external skills.

These five skills are further classed by Dr. West into “external” and “internal”. “External” skills of musicianship include the executive and notation elements, which are the skills we often think of in traditional education, such as playing an instrument and reading music. “Internal skills” of musicianship are the tonal, rhythmic, and creative abilities, which allow you to bring music to life in your own way.

Why is this so? Things such as notation and technique are easier to teach and more quantifiable to assess and evaluate. It’s easy to know whether or not someone is playing the right notes or can read music but not as easy to determine what a student feels.

Once upon a time, “traditional” music education did focus on developing internal musicianship skills. This was because before music education became “schoolified”, music skills were passed on aurally, as the technological tools of communication and the mass accessibility to education simply didn’t exist.

However, just because something is observable doesn’t mean it’s the most important!

That isn’t to say that internal musicianship has been completely neglected in 20th century music education. If you peek into a good elementary school music classroom, you’ll often see children moving, singing, clapping, listening and improvising. These classrooms are emphasizing basic internal musicianship skills, which are referred to in the school system as “readiness skills”.

Just because there are great things happening in elementary school music classrooms doesn’t mean that students arrive to secondary school with these readiness skills, however. Secondary school music teachers shouldn’t assume that all students have had this great inner musicianship education, otherwise they run the risk of failing to continue their development past the elementary level.

“Decode the Dots” or Audiate?

For those new to the subject, a simple example of audiation is when you get a tune “stuck in your head.” Another example would be when your mind anticipates the resolution to a chord progression because your ears have been conditioned to hear relationships between common chords. Furthermore, you’re audiating when you automatically hear in your head an alternate ending to a familiar musical phrase.

Music – It’s Not Just for Instruments

Today, it’s no longer entirely necessary to play a musical instrument or to know music theory to be a musician. Voice or acoustic instruments are no longer the only ways to produce music because with computer composition programs, we can produce music without an “instrument.”

There is a rise of a new type of instrument: the computer, the iPad and the smart phone. One can have an entirely satisfying musical career without the skills of music theory of or playing an instrument. Just think of all the famous musicians who perform beautifully without knowing how to read music!

On the other hand, there are still many clear benefits to learning music theory and of playing “traditional” instruments! Dr. West suggest that music educators simply need to find a way of holding on to traditional ways of learning music while embracing the shock of the new.

Nontraditional music education forums such as Skype lessons and online tutorials are becoming increasingly popular. Dr. West finds that many of these tutorials and so-called  “informal” music education approaches are actually quite adept at developing internal musicianship skills.

YouTube tutorials, for example, often start with the holistic approach of making real music. School music, on the other hand, often starts with exercises that bear no semblance to actual music and the practice of making music becomes an “exercise” rather than an art and a chore. The passion is simply taken out of music.

Traditional methods of music education don’t always focus on the necessary skills for today’s music-making. Lacking in the curriculum are the embracement of the advanced technological tools of making music and of the older, core aural and inner musical skills.

By learning the five skills of musicianship as suggested by Dr. West, you will be well on your way to becoming a complete and versatile musician in the modern world. Hopefully, by connecting to your inner musicality, you will find the passion and love for learning music that may have been educated away.