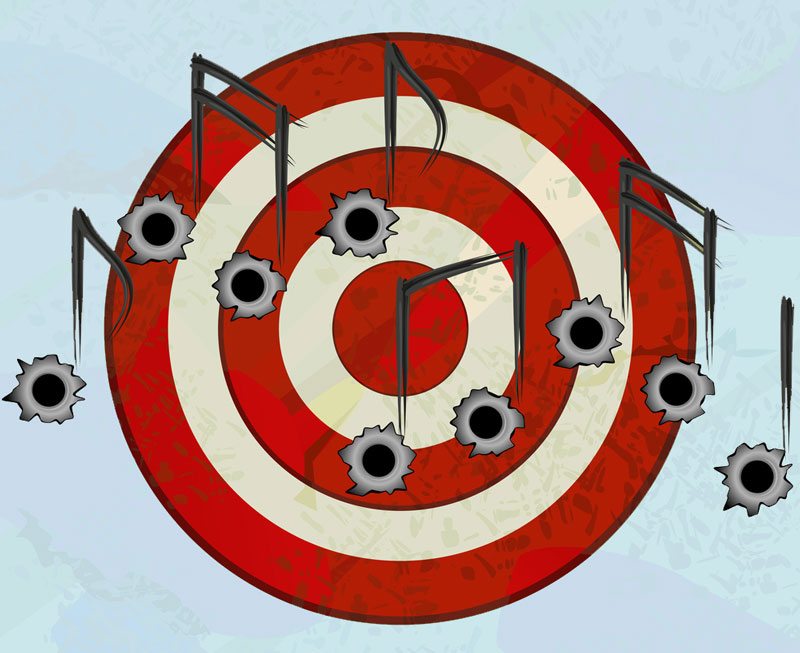 There are probably few things more painful to listen to than a singer who is out of tune. In fact, in last week’s article, “The 16 Keys to a Good Singing Voice”, good pitch control was #1.

So what can you do if you have trouble singing in tune?

There are a number of things which can help you learn to sing in tune, including using a digital tuner, doing pitch ear training, and interactive singing tutors. Today we’ll look at 3 simple exercises you can use to refine your vocal pitch control and practice singing in tune.

Note: Having a piano keyboard or some kind of piano phone app will be useful for providing note pitches.

In music we tend to group notes into different bands of pitch which are called octaves. Each octave includes every note in sequence (e.g. from A up through to G♯) leading up to the starting note again in a higher register. If a man and a woman sing the same song, they will most likely be singing the same notes but in different octaves, to suit the range of their different voices.

In the keyboard example below, two octaves are marked, from C up to the next C, and up to another C again. Octaves are made up of much smaller intervals called semitones and tones, which can also be called half-steps and whole-steps respectively. In this tutorial we’re going to work towards being able to sing notes which are a semitone or tone apart accurately and reliably. First though, we need to free up our voice and explore the full range of pitches our voice can produce.

That’s right: despite what the piano keyboard might suggest, there are actually pitches in between semitones…

In the Western musical scale there aren’t officially any notes closer together than a semitone. In most cases playing pitches between these semitone notes is considered to be out-of-tune. So for example, if you were playing a stringed instrument (where different pitches are sounded by touching strings along the fingerboard) and you played a note between an E and an E♭, then you would be out of tune and would need to adjust accordingly. Guitar players sometimes bend strings to achieve this effect. When it comes to singing, producing notes is more like a stringed instrument than a piano, as it is possible to sing notes in between semitones. This means that you can sing out of tune, and you will have to adjust. Unfortunately with the voice, learning how to sing different notes is even more subtle than placing a finger in the right position on a string. However, the upside to singing is that it is just as much mental as physical, and your hearing skills play a much more direct part in singing.

For this reason, with singing it is essential to have a good ear so that you can pitch notes correctly. So before learning to sing semitones and tones, let’s try an exercise to help you “free” your voice in order to sing the whole range of pitches available.

Freeing up your voice? Sigh!

When people start out singing, a common problem is not knowing how to use their muscles to produce different notes. A good way to overcome this is to free up your voice rather than restricting it to certain notes (like with a piano where you press a key and the note just sounds).

Exercise 1: Sighing through your range

To free up your voice, simply breathe in, and then as you breathe out perform a vocalised sigh. You’ll notice this sounds like a pitch sweeping downwards, but it will probably feel more natural than regular singing exercises. Try and make your sigh as vocalised as possible so it’s close to actually singing. Repeat this, starting from different places in your range.

By doing these sighs, you’re allowing your voice box to get used to working the muscles used to change pitch. There are two vocal folds in the voice box, which come together when you talk or sing, and move apart when you’re breathing in. When you change pitch in your voice, the vocal folds change shape very subtly, so the key is to get your voice used to being able to make those changes.

As you get comfortable moving through different parts of your range, you will probably find you open up your voice to singing more notes than before, expanding your range. Then it’s time to start focusing back within certain boundaries.

Pick a specific note from the range you’re able to sing. Use the piano to help you make sure it’s a correctly-tuned note (not in between semitones). Then you’re going to slide up to the same note one octave lower. If this is too far for your range, choose a note a fifth lower instead (count down 7 semitones).

This is a lot like the sighing exercise from before, but this time it’s more controlled and with a specific start and end note in mind.

The technical term for a slide is portamento. However, this portamento is going to be really slow. It doesn’t matter whether you sing this to an “ah” sound or just hum. The key to this exercise is to keep it slow and pay attention to how far you are moving down the octave. You can also do this starting on the low note, ascending.

To refine your sense of pitch further you can also play each semitone up the scale so you get an idea of the notes you are passing as you sweep your pitch. Make sure you keep your own slide smooth though!

Finally, it’s time to get even more precise, using semitones and tones. The exercise is similar to before: we will sing through an octave in your range, but this time progress by steps, either semitones or tones. That means singing 13 semitones or 7 tones.

Semitones will be easier because you only rising in very small amounts, and again you can use the piano to help you. Singing tones is a lot harder and may sound quite strange at first, as scales using only tones are not very common in music. Examples of singing a scale of semitones (also known as a chromatic scale) and singing a scale of tones can be found below:

Keep paying attention to the details of pitch

The three exercises above should help you to:

Your singing practice may move on to more advanced exercises, but remember to practice these fundamentals too. Singing a complex piece is no use if it sounds out of tune to the listener! It’s a great example of the musical principle that the details can be just as important as the overall sound!