When to stick with it – and when to move on

by Musical U Team | Podcast, Mindset, Planning and Goals, Practice 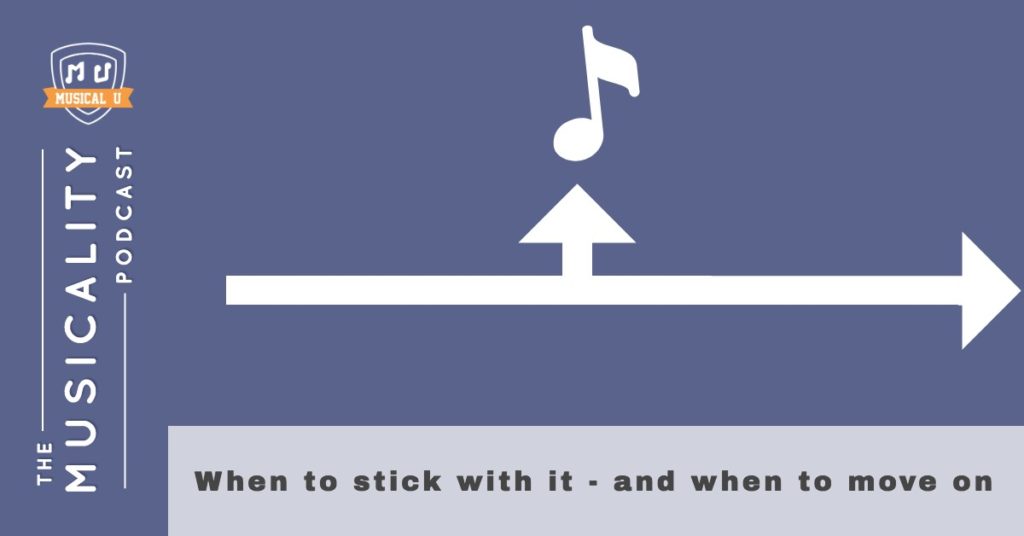 Learning music can sometimes be frustrating. It can feel like you’re putting in a ton of effort with very little results to show for it.

But at the same time we all know that persistence is the key to success.

So how do you know when you’re being virtuous for persisting – and when you’re just bashing your head against a brick wall?

How do you know whether to give up or stick with it? 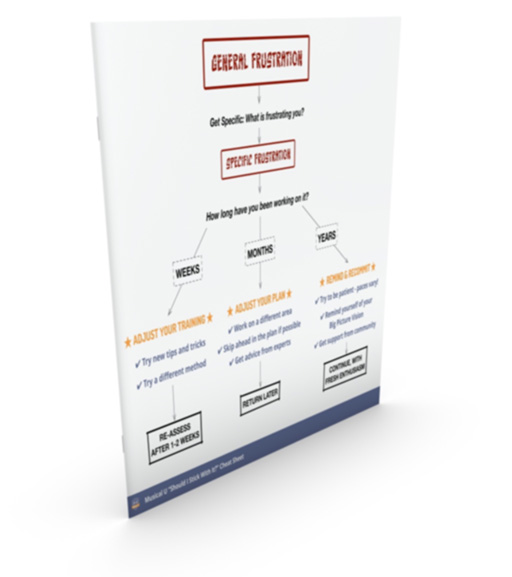 Get The Free “Should I Stick With It?” Cheat Sheet
Download Now!

In the last video we tackled the question: Is it time to break up with music?

We talked about how you need to get specific about what’s bugging you and making you feel frustrated or disappointed. That it might be one specific skill or topic – or it might be planning, that the work you’re doing isn’t clearly aligned with the goal you’re striving to reach.

In both cases it can be helpful to have guidance on “How long should you stick with it?”

Because being determined is good and can help you get through the hard work required to learn challenging skills. But taken too far it can lead to losing motivation, getting frustrated and putting in a lot of effort for negligible results.

It’s a bit like playing poker: you don’t have to play every hand – and sometimes you get into a hand and then realise partway through that you should fold. Folding isn’t giving up, it’s the smart move to help you win the overall game.

So the first thing to say is: It’s okay to fold. Or specifically for music learning, it’s okay to adjust course.

One of the beautiful things about learning music is that it’s not a strict straight line you must follow. Very often when we’re stuck on one thing, we can go spend some time on something else and when we come back we find that thing which was hard is suddenly much easier. So often you can safely put something aside without worrying that you’re abandoning it or giving up – you’re just taking a pause on that particular thing to help you keep moving forwards overall.

This question came up in a Musical U Members Q&A one time and we turned it into a “tips” discussion inside the site specifically to help answer the question: “How long should I stick with it?” when a member’s been working on a particular module – say, interval recognition – and feels like they’re stuck.

What we recommend is to ask that question on three different timescales: weeks, months and years.

With something specific, like distinguishing major from minor harmonic third intervals, we tend to recommend a week as the timescale to have in mind. So, if you’ve been doing exactly the same thing for a week and you’re not seeing any improvement, it’s time to make a change.

Typically, there are going to be small adjustments you can make. So in the case of intervals, there are going to be tips and tricks, or different ways to approach it, different avenues in to let your ear tune in to what it needs to hear. In Musical U we have lots of “tips” discussions to suggest things to try and of course the team is always on hand to help.

If you’ve been at it for a week and not making progress, the first thing to do is to recognize that. To not get discouraged (because a week is not that long!) and there are things you can do. But then it’s to find small adjustments you can make, maybe new insights, new tips, new methods you can use to tackle that same problem in a different way. So try the same thing from a different angle.

After you’ve done that a few times or after you’ve run out of tips or tricks you need to take a step back and think about it in the bigger picture.

The medium timescale is months.

In the case of those major and minor thirds, we’d probably recommend moving on to a different interval or a different combination of intervals. That’s something you might like to do even after just ten days or so because the wonderful thing about your training, in general, is something you do in one area can have a surprising knock-on effect in another area. That’s particularly true with intervals and chords and chord progressions where you’re developing your core sense of relative pitch throughout.

It’s important to know this is never a “cop-out” – it’s never “giving up” to move on to something else.

If you’ve been at the same thing for a few weeks and you’ve tried a bunch of different approaches, don’t be afraid or ashamed to move on to a different area. It’s not a failure in any case on your part. It’s simply giving your ears and brain a break and feeding them a different area to study before you come back and revisit that thing you were stuck on.

Spend a week, then try some different techniques. If that’s still not helping after a few weeks, adjust your plan. Again, at that point often a member will use their Progress Journal to get guidance from the team to know what to change.

Finally, the largest timescale. We almost never see people get to this stage in Musical U or in general, but it’s always at the back of your mind: “Should I give up completely?”

This feels like such an admission of failure and it feels so emotional to even consider it. But we have to be upfront about it and say, “You know, this is what we’re always worrying about.”

We’ve already talked about this a bit, but if you are not making progress on the small stuff and you’ve tried a few changes and even on the course of a month or two, you feel like you’re not making progress naturally you’re going to start to wonder, “Is there something wrong here? Am I ever going to crack this?”

There are two things to know.

The first is: definitely don’t give up! Everyone is capable of learning these skills and we all move at different paces and we all need different routes.

Again it’s not a failure on your part if you’re not seeing the progress you wanted to. As long as you’ve been putting in the work and you’ve been staying conscious of how it’s going and asking yourself these kinds of questions about whether it’s time to make a change. You’ve done your part and you have to trust that you’re moving at your own pace and you will get there.

I can say that confidently because we’ve seen so many people at Musical U who do feel like they’re struggling or like they’ve not made any progress for months, and then finally they find the approach that works. And they do crack it, and they do have the success they were hoping for.

The second thing is: this is where it’s vital to be part of a community. It’s easy to bury yourself in a room or by yourself, study hard, feel like you’re making progress. And then when you’re not making progress, you feel very alone and very isolated. That’s when it’s easy to say “I’m just not up to this, I can’t do it, I’m going to give up.”

This is why we emphasise community so much at Musical U. It’s not about social chit-chat. It’s because at that moment, when you’re worrying, when you’re doubting yourself, that’s when you need people around you to say, “Look how far you’ve come already, look at the things you’ve been able to do so far. Look at these other people who’ve struggled with the same things and then persevered and succeeded.”

And just to offer that advice and support and guidance, that’s what the community is here for at Musical U, and in particular what the team is here for.

So, if you can bring yourself to admit that you’re having that difficulty, and you can bring yourself to reach out and even if you don’t ask for help just to share where you’re at. That’s when the community can step in and help you – both in a general way in terms of offering support and guidance, and in a very constructive specific, practical way by saying, “Hey here are three other things you could try.” Or, “here’s something you can adjust about your training plan that’s going to really help you move forwards.”

So to recap: we’ve gone from small to medium to big timescale.

Small-scale, a week or two: add some new tips and techniques

Medium-scale: a month or so: if you’re still not cracking that one specific thing, time to adjust your plan and move on to a different area for a while.

The big picture: if you reach that point of feeling like you’re failing overall and you’re not going to get there overall, that’s when you need to reach out to your musical community and just share what’s happening. We’ve all been there, we can relate to you. We know what’s going on, you don’t need to feel sheepish about it. Say, “Look I’m at breaking point, I’m feeling like giving up,” and there’s no doubt we’ll be able to help you get your mindset back on track and come up with some practical ways you can take steps forward, whatever stage you’ve reached.

If you start using this mental model for the three timescales of music learning, and the tips I’ve given here for each, then the question “Should I stick with it?” will become a lot easier to answer. And you’ll be able to make Kenny Rogers proud.

If you want a handy cheat sheet to remind you of this process, the perfect thing to print out and keep handy in your music folder or practice space – just hit the link or visit the shownotes for this episode at musicalitypodcast.com.