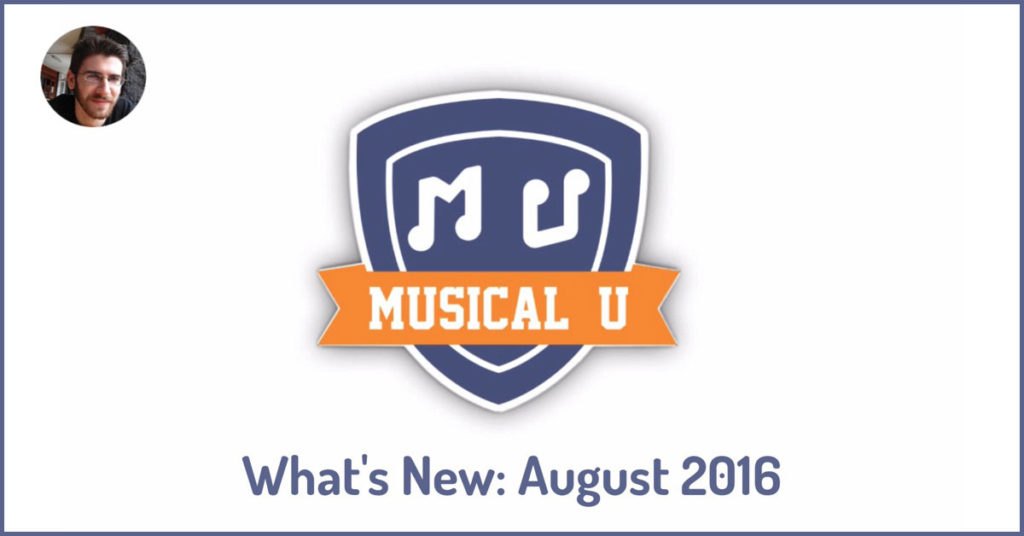 Hi, this is Christopher, the founder and director of Musical U. I wanted to just take a quick moment to share what’s new in Musical U this month. It’s been an exciting month!

We’ve added a new module to the site, which I’m excited to show you. We’ve revamped our member profile system so that members can get to know one another more easily and find other people to talk to about their musical training. And we’ve had some great discussions going on in this site about various aspects of music.

Let’s dive right in! You can watch the video, or read the transcript below.

The first thing I wanted to share with you is the new module. I’ll head on over to the training section. The new module is called Finding the Key. We’ve put this in the Pitch section. It actually relates to several other topics but Pitch seems to be the most fundamental.

This is a really exciting module we’ve added because it’s kind of “step one” in a lot of things we teach at Musical U. We teach skills about playing melodies by ear or playing chord progressions by ear, learning to improvise, that kind of thing. And really, for all of that, you want to know first what key is the piece of music in, so that you know which notes are going to fit in and sound right.

This new Finding the Key module teaches you a four-step process you can use to easily find the key of a piece of music by ear. I won’t dive right into the module, but it’s a “Learn” module, which means it’s explaining. We’ll be following it up with a key-finding “Practice” module so you can really hone these skills.

It does, of course have a quiz at the end so that you can check what you’ve learned, and a discussion section, so if you have any questions about finding the key, or you need extra help, you can ask and get the help you need.

So that’s the new module. I’m excited to see how our members get on with that. Like I said, it’s a kind of cornerstone for several other things we teach. It’s a missing piece of the puzzle. I think it’s going to help out a lot of members with playing by ear and with improvising and with collaborating with other musicians, all kinds of things.

The second major addition this month was a new member profile system. We’ve always had a basic profile system on the site where you could say what instrument you play and a couple of other things. We totally overhauled that this month to let you give a lot more information about yourself and see a lot more information about other people, so that you can get to know other members inside Musical U more easily.

As always, we’re blurring out user names and pictures in the video for privacy. We want to respect that some of our members prefer to keep their name or profile picture private, or at least keep them inside the community. I’ll just show you a couple of staff profiles.

Here’s Stewart, our community conductor. We can take a look at his profile. You can see right up at the top, he plays guitar, bass, and another miscellaneous string instrument, which I suspect might be ukulele. We can learn about his training and what he’s working on, a bit about himself personally, his musical interests, favorite genres and that kind of thing. Then down here we can see the awards he’s earned inside Musical U.

Most of these will represent a training module. For example, here’s our Learning Intervals Module. Others are given for community interaction. Others are about planning your training.

Actually here you can see another new feature this month, which is: awards for the number of points you’ve earned. You earn points throughout Musical U for completing modules, passing quizzes, interacting in our community, posting new discussions, that kind of thing.

We can see up here Stewart has earned over fifteen hundred points so far and he’s got corresponding awards here to recognize that. Over here in the activities stream actually, you can see one of our new joiners has just hit the hundred point target, which is a great starting point for him in his Musical U training.

Down at the bottom of the profile, you can see links to the member’s Progress Journal. Stewart actually has two, one for his ear training and one for his current tour. He’s on tour with a band at the moment doing tribute acts. There’s his progress journal sharing some of his ups and downs along the way.

That’s the profile system. I’ll just pull up one other. Here is mine. Like I said, I’d love to show you some of my members in action, but for privacy reasons, I’ll just stick the staff for now. Again, it’s information about me and my musical training, the awards I’ve earned so far, a link to my progress journal, that way you can learn a lot more about what I’ve been up to.

That’s one part of the new member profile system.

The other exciting part was we added a member’s directory, so that if you are, for example, in Australia and wanting to connect with other guitar players who are learning chord progressions, you can actually now search across all of our members.

You can explore here and just see a big list of everyone.

You can also dig in and do a search and say, “Well, I want anyone who plays guitar and someone who’s in Australia and who’s interested in learning chord progressions.” If you do a search, then it’s going to pull up just those members that match. That’s a great way now to find other friends in Musical U, maybe find someone who’s a step ahead of you on the same path and can give you some tips, or an accountability partner to help with your progress journal and keeping you on track.

Those are the major additions to the site. We’ve also had some great discussions going on this month. A couple of my favorites are, oh they’re up here in recent discussions. “Jazz Appreciation” has been going strong. It’s been lots of people contributing there, sharing their favorite jazz artists and videos of performances to help everyone understand and appreciate jazz in a bit more detail. That’s been a lot of fun.

A surprising favorite has been “Death Metal Appreciation”. It turns out we have a lot of metalheads in Musical U! They’ve been helping everyone understand what makes death metal more a more appealing genre than you might expect. Again, there are some great videos and tracks to enjoy there.

Our “Music History Monday” series has been going strong. This is something, one of our team members Kelly started a couple of months ago, posting a new discussion every Monday about some aspect of music history. You can see here, it’s been going awhile, and touching on different composers, different genres, different aspects of music history. That’s been a really terrific addition to the community. Everyone I think has been learning a lot and enjoying the discussion that follows.

So that’s been July at Musical U!

It’s been a busy and exciting month. We’ve had a lot of new members joining and getting started with their training, which is great to see. Also a few members hitting real milestones this month, which was wonderful to celebrate with them.

Thank you for joining me for a quick glimpse at what’s new at Musical U this month!