by Musical U Team | Podcast, Band 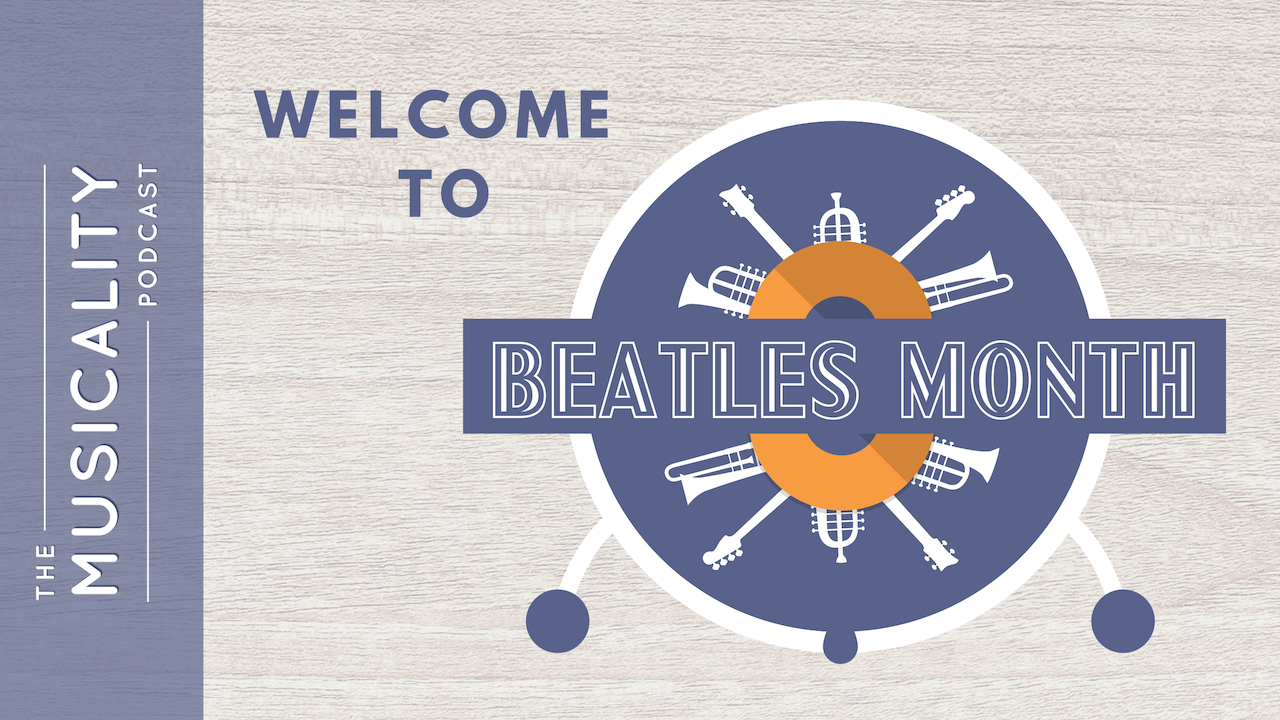 Hello, and welcome to Beatles Month! Today we’re kicking off a very special series of episodes where we’ll be celebrating all things Fab Four – and particularly diving into all the musicality questions we’re so interested in here at Musical U – like what makes a song tick, how to understand what you hear in music, and what are the concrete, practical skills that underlie apparent musical “talent”.

Now if you’re not already a Beatles fan, I’m confident you’re still going to find the upcoming episodes fascinating and useful – and I think we might just be able to convert you into a fan along the way too – because the Beatles are utterly unique and their success and their musical output is incomparable.

They are the best-selling band of all time with more than 800 million album sales, and have had more Billboard number one hits than any other artist. All four members have been inducted in to the Rock-and-Roll Hall of Fame and Rolling Stone ranked them as the best band of all time.

Across just six years they released a dozen seminal albums including countless songs we all know and love – from early hits like I Want to Hold Your Hand, From Me To You and Can’t Buy Me Love, through to surreal and psychedelic genre-bending highlights like Yellow Submarine, Strawberry Fields Forever and Magical Mystery Tour and continued to produce songs many would consider among the best of all time like Hey Jude and Let It Be right up until the band went their separate ways in 1970.

Wherever you are in the world, whatever age you might be and whatever style of music you like, the chances are there are Beatles songs or albums that you love.

For my part I grew up with a Beatles-loving dad who was always singing “Good-day Sunshine”, “Maxwell’s Silver Hammer” or “When I’m Sixty Four”. After nursery rhymes, Beatles songs were the first songs I knew all the words to. When my family got together to celebrate the millenium it was one of the few times I was persuaded to get out my guitar and play – and it was the Complete Beatles Songbook that got everyone singing. Long before I discovered Pink Floyd, Radiohead and Frank Zappa it was the Beatles that showed me that music could be wild and varied and fascinatingly different with every song. And when in my twenties I had to get a class full of Japanese schoolchildren singing in English, it was a Beatles song, “Hello, Goodbye” that turned out to be the perfect choice.

Even now, when I sing my two young daughters to sleep, it’s often with a string of Beatles songs and when I discovered my 3-year old could finish the lines of Penny Lane with me as I sang them – that was a proud moment for me as a father.

Almost fifty years after their final recording the Beatles are still everywhere. So much so that I think we take them for granted, especially those of us who didn’t live through their heyday, seeing each new incredible album released in turn. But when you stop and consider, it’s hard to think of any other band that truly compares.

And with the breadth of incredible music they produced and the fascinating stories behind it all, it’s actually difficult to say anything about the Beatles without being ultra-conscious of everything you’re not saying! Even just listing some of their songs and achievements there, I was immediately thinking “Oh but what about this one, what about that one?”! So before we go any further with Beatles Month I’ll just give a blanket apology for everything that goes unsaid – and if you feel we don’t do justice to particular songs or facts you love please do share your own Beatles insights in the comments.

So: an incredible band. But this band didn’t spring out of nowhere with a magical talent.

As you’ll be discovering in the episodes ahead there are clear, practical, learned skills and down-to-earth explanations behind all of the remarkable things they were able to do.

We’ll be talking with Scott Freiman, creator of the uniquely-revealing series of multimedia presentations “Deconstructing the Beatles”, all about the creative process of the Beatles, including one specific technique you can listen for in any music but which the Beatles utilised in new and unusual ways.
We’ll talk to Matt Blick of Beatles Songwriting Academy about the many song writing lessons we can learn from the Beatles and how we can all apply the same principles ourselves, including the particular ways the Beatles modified common chord progressions to be more effective and distinctive in their songs.
We’ll be talking to Scott Kuehn about the powerful underlying messages in the music of the Beatles – and the impact that had, including how they engineered exactly when and how to make all the teenage girls scream during a song!
We’ll speak to Aaron Krerowicz, the world’s only full-time professional Beatles scholar and author of multiple books about the music of the Beatles, all about the detail of the music of the songs, meaning the specific words, notes and chords they used where and why, including what we can learn from looking at which member of the group wrote each song, and the way the music and lyrics relate.
We’ll be talking with Kenneth Womack, author of a two-volume biography of George Martin, the man often referred to as “The Fifth Beatle” for the critical role he played in their artistry and commercial success, including the changes George made to their songs after the height of Beatlemania that is perhaps the reason they are still so renowned now, fifty years later.
And I sit down with the four members of one of America’s leading Beatles tribute bands, Hard Day’s Night, to talk about what goes into faithfully reproducing the music of the Fab Four in painstaking and loving detail so that the audience feel like they’re experiencing the real thing. Including what it was like to play Beatles songs at the Beatles’ own Cavern Club in Liverpool.

Now normally with this show we record the interviews within a month or so of when you hear them. But to be able to assemble such an amazing group of Beatles experts we actually recorded these interviews over the course of six months.

And I mention that to say a couple of things:

First, a heads up: if you’ve been enjoying the new video format of the podcast, a few of these sessions are, I’m afraid, audio only – because we hadn’t yet made the switch to video at the time of recording. We’ll still be publishing videos for them, so don’t worry, but it will be an audio-only experience.

The second thing is that the different timescale to normal meant that I didn’t write my intros and outros right after each interview. In fact I went back through them all just in the last couple of weeks to draw out the summary points – and that was *so much fun*!

It really hammered home to me just how cool and fascinating these conversations were. And I think that goes for any degree of Beatles fan you might be. If you’ve barely heard their songs, you’re going to learn a ton and be inspired to listen more. If you’re a fan, you’ll delight in the stories and details of the band and the songs. And I think even if you consider yourself a superfan there are going to be such a variety of perspectives and analysis and discussion in these interviews that even you are sure to learn something new and interesting.

You’ll find that the episodes cover two main angles on the Beatles – the musical and the historical. The musical is the nitty gritty of the notes and lyrics themselves , and then by “historical” I mean the stories behind the songs and how they actually came to be.

Now I’m not someone who’s into facts and trivia just for the sake of it – though I know Stewart from the Musical U team is going to be having some fun this month with our members doing Beatles trivia! So when I say “historical” I’m talking about the kind of backstory that brings the music to life.

I was interested in both the musical and historical for the sake of music appreciation – how can we become more sophisticated music listeners when it comes to the Beatles?

Music appreciation is a somewhat fluffy term but I like how it encapsulates both the “active listening” we talk about a lot, where you’re tuning in to the pure music in more rich detail and depth – *and* it covers the broader knowledge of the context and background of the music that can give you a deeper understanding of what’s going on.

During this month we’re going to be using the Beatles as a case study for how you can learn more about *any* music from both the musical and the historical perspective, and how that can let you hear more, enjoy more, and ultimately *do* more in your musical life.

And before I forget, here’s an initial heads-up on something exciting: In a couple of weeks we’re going to be releasing something brand new and groundbreaking to help you hear more and understand more in every piece of music you listen to – and we’ve put together a special Fab Four bonus to go along with it. Stay tuned for full details on that.

Now to prepare for the amazing interviews ahead I’d like to set you a fun bit of homework – first, listen back to our previous episode on Active Listening. Then go pick two or three of your favourite Beatles songs and note down everything you can notice about the song. Then, at the end of Beatles month I’m going to ask you to go back and listen again – and see what new insights and understanding you now have of those same tracks you thought you knew…

This month has been so much fun to put together, and thank you in advance to the six Beatles experts who’ve contributed, as well as the Musical U team for helping to put it all together. I hope you’ll enjoy it – and that it will increase your love of the Beatles as well as more broadly empowering you in a new way in music.

And stay tuned for details of that special release we have coming up in a couple of weeks that will help you take this even further.

That’s it for this short introduction to Beatles month. Enjoy your “homework” assignment, let me know in the comments which songs you picked – and I’ll see you on the next one for our first Beatles expert interview, with Scott Freiman of Deconstructing the Beatles!