5 of the World’s Most Unique Instruments 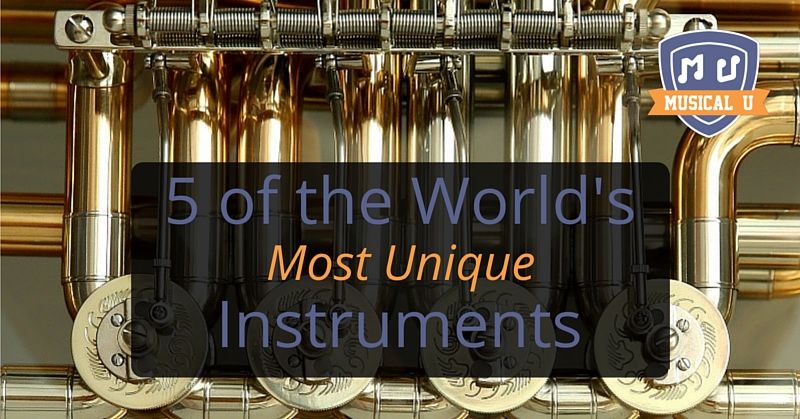 One of the best things about being a musician is the freedom to express yourself in any way you want, including creating your own unique instruments.

Whether inspired by other musicians or just their imaginations, this list is composed entirely of instruments designed by their creators to be truly one-of-a-kind.

Though it was named after the resemblance of the particular 37 stalactites used to make it, this instrument is actually known as a lithophone (an instrument played by striking rocks to produce sound) and is in the same family as xylophones and glockenspiels.

The stalacpipe organ was built from 1954-1957 in the Luray Caverns in Virginia by Leland W. Sprinkle, a local government worker. Sprinkle was inspired to create this magnificent piece while on a tour through the caverns for his son’s 5th birthday in 1954.

It holds the enviable title of the World’s Largest Instrument as it sprawls over 3.5 acres and can be heard throughout the Luray Caverns without any electric amplifications.

If you’re a fan of horror movies, you’ve probably heard the theremin – an electronic instrument played without actually touching its two antennas together. By controlling frequency and volume with each hand, it’s easy to create a haunting sound.

Built by David Cranmer, an artist who works with electronics and robotics, the Badgermin takes weird to the next level by combining the eerie sound of a theremin with a taxidermied badger.

It is functionally identical to the theremin, but you have to admit that there probably isn’t anything else quite like the Badgermin anywhere in the world.

Kent Jenkins (aka “Snubby J”) first invited the RimbaTubes – a collection of PVC pipes played with plastic kitchen spatulas – in 2007 after being inspired by Blue Man Group. Needless to say, his creation gained him a lot of international attention.

Comprised of more than 25 PVC tubes, each pipe has its own unique sound and “rings” when it is hit with a specialised spatula.

The RimbaTubes landed Jenkins on “America’s Got Talent” and have paved the way for his career. He now lives and works in Los Angeles and still plays his instrument in street performances.

The yaybahar is an entirely acoustic instrument played by striking membranes, coiled springs, and fretted strings. When playing, creator Görkem Şen is able to produce truly other-worldly sounds. The yaybahar almost resembles a minimalist sculpture rather than a musical instrument.

When not improvising alien tunes in his tower that overlooks the sea, Şen is able to play traditional Turkish folk songs and even Beethoven’s “Ode to Joy.”

This incredible instrument was built by Swedish musician Martin Molin and combines a kick drum, bass, and a hand-cranked music box which uses over 2,000 marbles. It is truly an amazing achievement, considering it is made up of largely wood and plastic components with very little electric power.

Molin carefully designed the individual pieces of the Marble Machine over a 14-month period after being inspired by other marble machines and the entire subculture around them.

In addition, the central wheel is fully programmable which allows Molin to change the key of his songs on the fly.

Do you have any other instruments you think belong on our list?