Home » How To » Song Writing » Play Your Way In: A Songwriting Game

Play Your Way In: A Songwriting Game 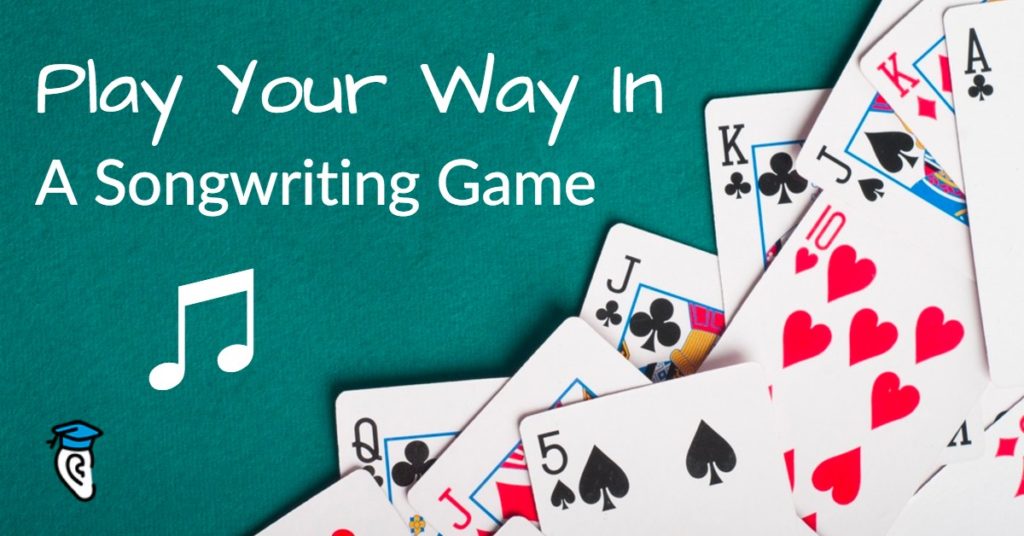 Do you want to write a song? Stuck for inspiration? Step one: Don’t take yourself too seriously! Why do you think we call it “playing” music?! Play moves us past our grown-up inhibitions and self-criticism to the inner source of our creativity.

Did you know that even the great composers liked playing musical games?

As I write this article, I am going to play a songwriting game to start those creative juices flowing. A short scene in the movie Amadeus inspired me to create this exercise. The great composer Wolfgang Amadeus Mozart was seeking fresh ideas. He rolled a pair of musical dice and used the notes that came up to write a new melody. Good enough for musical geniuses, yet easy enough for young children!

Play Along With Us

Today, my 4-year old son S. has joined me to help! He’s now sorting a deck of playing cards. 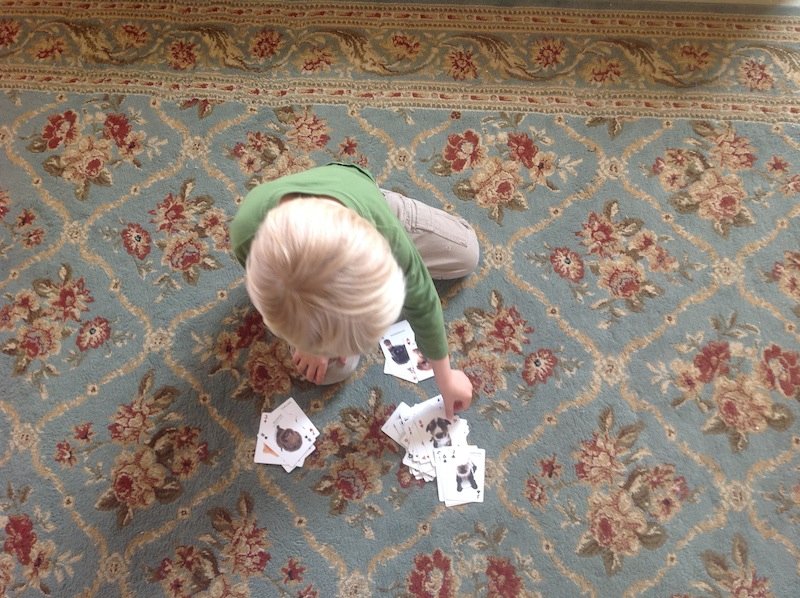 I recommend removing all but the cards Ace through 7 to start. If you want more challenge—and more interesting melodies—you can use the cards this way:

Ok, he’s done sorting. Now after I shuffle, he will pick ten cards from the pile and line them up: 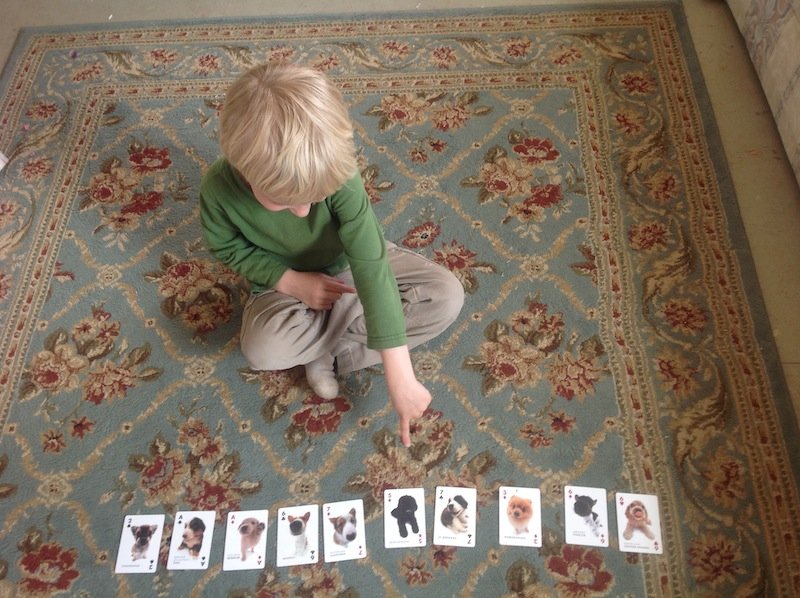 Here is what these pitches sound like in sequence:

There is some decision-making here: should you go up or down to each note? Usually, I try to choose the smallest distance. For example, from C up to A is the interval of a sixth. Let’s move from C down to A, which is only a third.

Now, let’s determine the rhythm. I like to begin with shorter notes: half notes (2 counts, or beats) quarter notes (1 beat) and eighth notes (½ beat). We can use the picture cards for those: 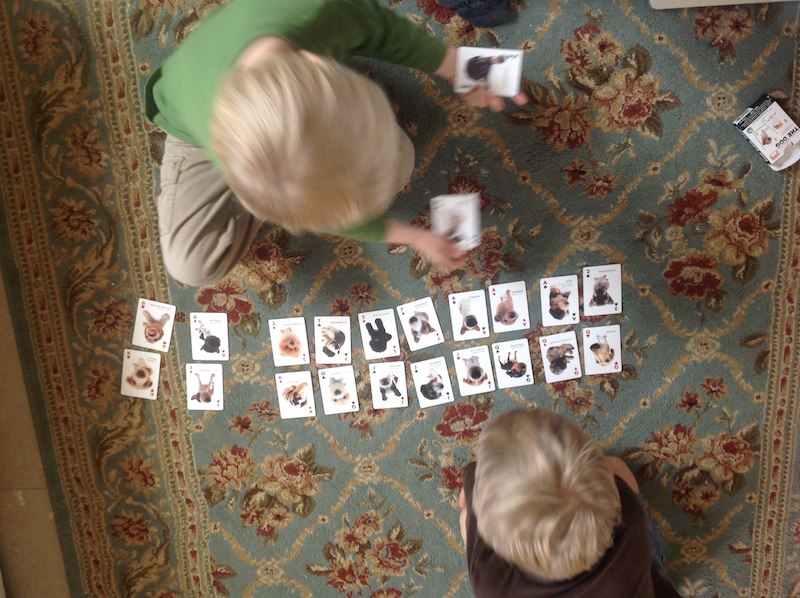 An interesting rhythm, but a little hard to sing. Most of the time I wind up adjusting the purely-random rhythms to “square them off”. I decide whether I am going to group the notes into measures of 3 beats or 4 beats.

Let’s make it 4 beats a measure, and change two of the eighth notes to quarter notes:

I also added a rest on the end to square off the last measure.

Now I’ll teach my 6-year-old J. to sing the melody with me. I asked him to add any words he wanted. He hums along, sings the word “dragons” with the last two notes, and says that they live in a cave. I’ll form his ideas into lyrics that fit the rhythm of the melody: “Look inside the cave: you’ll find dragons.”

I like how the melody goes down on cave, as if we’re looking deep inside. The long note on “find” adds suspense before we know who’s in the cave!

Home on the Range

As you can hear, J. is having a difficulty with the low notes. The range of this melody (the region of notes we have chosen) is too low for him. Let’s move, or transpose all the notes up by the same amount, and maintain the same interval relationship between them. We’ll try moving up a fourth—that way we won’t have to mess with any black keys—and see how it sounds:

What makes any musical composition hold together? Repetition! Why write something new when we already have a good melody? Too much exact repetition grows boring, so we are going to introduce some variations.

First of all, let’s keep the melody and write new lyrics. S. likes the words “Mr. and Mrs. Dragon.” Let’s give them some children, too:

Notice that we added an extra syllable. We covered that by splitting the half note in the second measure into 2 quarter notes. In the first line we were short a syllable, but the word “the” covered the 2 eighth notes quite nicely.

If we keep doing the same thing over and over, this song will become pretty boring. So, on the second line we changed the lyrics. When J. sang the song, he intuitively dropped the second A note on the word “their”, adding a melodic variation as well.

The Rule of Three

Now for the third line, let’s offer a contrast. Throughout the arts—literature, painting, comedy—groupings of three help the audience to grasp and remember a concept. In music, this usually shows where two similar sections are followed by one contrasting section. Where will we find our next line?

We could go back to the cards, but what if there were an easier way? The great 18th century composer Johann Sebastian Bach generated pages of music from just one or two measures of melody. Running the melody backwards, or retrograde, was one of his tricks.

Let’s try this with our melody:

Sounds great, and no new cards to flip! The boys have been talking about the dragons “blowing fire” in their stone house, so we’ll put that into the lyrics:

So many of the most memorable melodies were written by unknown songwriters. Even Mozart would have had to admit, the catchiest tunes come from folk music. Accordingly, he often structured his pieces just like many folk melodies.

We can diagram this as AABA form, where the A sections are similar, but the B section contrasts. In this case, our second A is a little different than the first. Let’s use that one.

Something a little strange about the end? Let’s fish around for a different last note. The C sounds more conclusive:

Neither Rhyme nor Reason

So far we haven’t rhymed any of our lines. I think it would be good to rhyme the last line. We’ll try to rhyme with “children”… Not easy! J. says “build in”: a good close rhyme! We discuss the warmth of the cave full of fire-breathing dragons, and come up with this:

“Warm and cozy: a good place to build in.”

“Build in” doesn’t seem to go with “warm and cozy” so S. suggests “rest in”. The approval is unanimous! 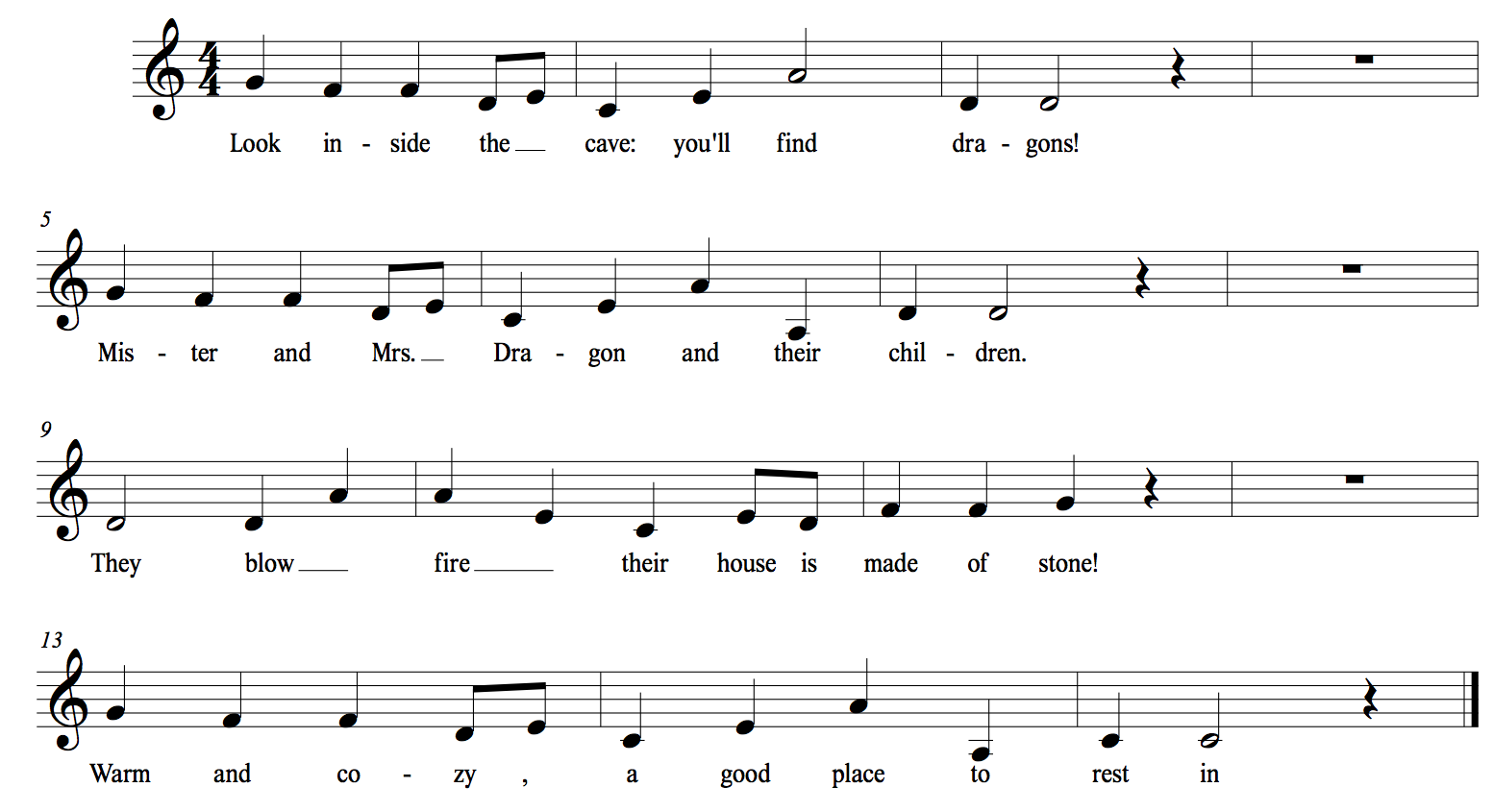 After a break, and some practice with a sister, our song sounds like this:

You may notice that there is a musical break after each line of verse. Most popular and folk songs nowadays use phrases (musical sentences) in multiples of two measures. Since we chose only ten notes, our phrases wound up being three measures.

From Child’s Play to Masterpiece

Okay, our little song might not be the next big hit. But we had fun writing it, and exercising our melodic, rhythmic, and lyrical muscles. When I play around with exercises like this my intuition and creativity loosen up. And, as Jesus said, “unless you change and become like little children, you will never enter the Kingdom of Heaven” (Matthew 18:3) Playing with music is the closest to heaven I’ve ever been in this life.

Next time you’re looking for new inspiration in your song-writing, try this game! And remember: musical play isn’t just kid stuff! Take the pressure off, and let the music flow. You never know, it just might turn out to be your first step towards a true masterpiece.