Think playing guitar is too hard? Guess again with NowStartABand.com 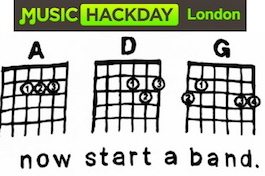 If you’ve ever been intimidated by the sheer number and variety of chords used in music, it can be useful to remember the power of the three chord trick and the number of four chord songs out there.

This weekend, taking part in the Music Hack Day in London, Easy Ear Training director Christopher Sutton created a website to show exactly that point, and hopefully inspire a few more people to take up or persist with learning guitar:

What are Music Hack Days?

Music “Hack Days” started back in 2009, the core idea being to gather together a bunch of music-enthusiastic tech geeks, and challenge them to create something new, fun, clever or wacky in 24 hours. And they have traditionally risen to that challenge! Making use of the fact that many modern music companies provide a way to access their data and services in a computer program (via what are called “APIs”), it has been possible for the hacker participants to create some very impressive things in such a short period.

The event this weekend was no exception, ranging from a supercomputer-powered synthesiser to an automatic Barbershop-ifier to a fantastic Johnny Cash music video!

Be sure to explore the full list of hacks from this year’s London event. There are plenty of fun and interesting ones to play with.

Here at Easy Ear Training we consider ourselves a music education technology company – but for the last several months most of what we’ve been developing has been kept tightly under wraps! So while we’ve been talking the talk about playing by ear and the power of ear training, it’s been a while since we’ve walked the walk and released some new tech-based ear training tools.

I decided the Music Hack Day was the ideal opportunity to do something about that! Inspired by Nick Long’s article ‘Four Chords and the Truth’ and this classic t-shirt, the idea for NowStartABand.com was born:

Let’s teach people to play guitar in as simple a way as possible: Learning just a few chords, and using the songs they already know and love.

Watch a demo video of the app in action

The “hack” is powered by several music websites. It starts off by using your Facebook Music listening history to find out what music you like. Because Facebook supports several music services this might come from Spotify, 7digital, Rdio, or others. Next, we use the leading guitar tabs website Ultimate-Guitar.com to find out what chords are used in those songs. (Unfortunately since UG doesn’t currently provide its data in an API, we have to misbehave slightly and ‘scrape’ the guitar chords from the site!)

We do some analysis on our server to determine which songs use a I-IV-V or I-IV-V-vi chord progression, and to transpose them all into the key of D. This last point is important, as it means the guitar student really does just need to learn 4 chords to play every song. Otherwise they might need 4 different chords for each song they wanted to play, to suit the key.

The 3- and 4-chord songs are presented in a list to choose from, and clicking one loads a Spotify player, information about the capo required to put your guitar in the right key to play along, and the lyrics (provided by MusiXmatch). 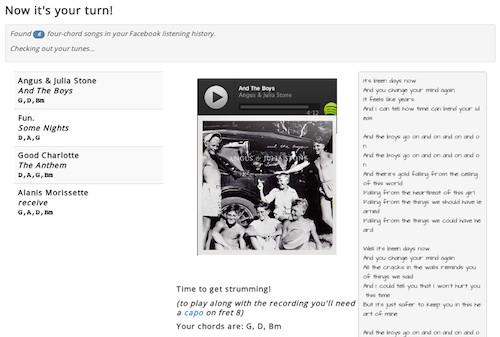 Choose which song you want to play by ear

Now you might ask: Why not just display the guitar tab?

The simple answer is: because we’re Easy Ear Training! A big part of the purpose of this app is to demonstrate that you don’t need complex chord knowledge and you don’t need finely detailed guitar tabs to play pop and rock songs. You just need a few simple chords and your ears.

By narrowing down the possible chords to just 3 or 4, the task of playing a song by ear becomes a manageable one, and Now Start A Band users can enjoy improving their aural skills while playing the songs they want to play.

There are many things which could be improved about the app, and it’s probably not the most reliable website in the world – that’s just the nature of Music Hack Day projects, created by coders fuelled by caffeine and lacking sleep!

That said, we’d love to hear what you think of the app. Do you like the idea? Is it worth developing further?

Did it work for you?

What features would you add?