The Funky Ones — What Makes Funk Guitar What It Is 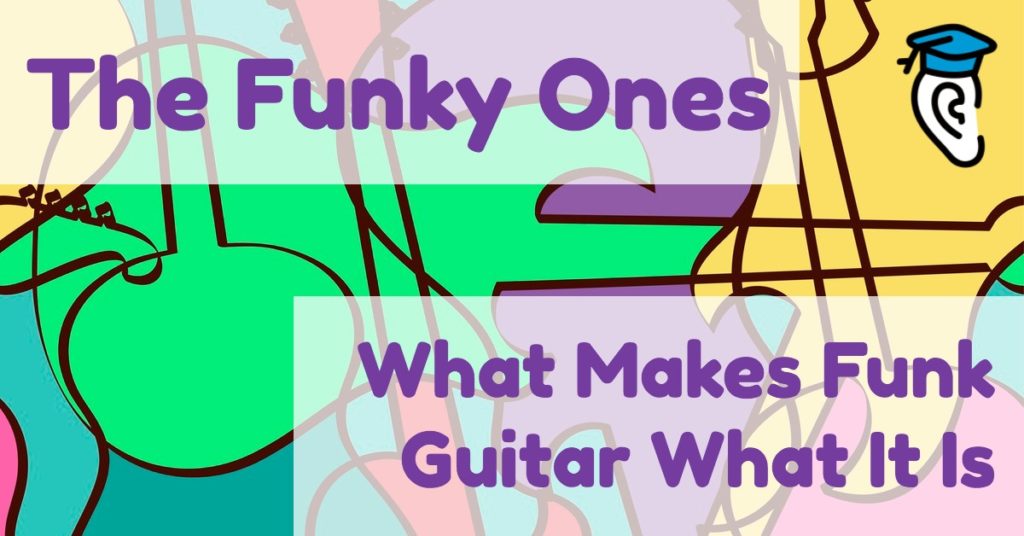 What makes a Funk guitarist? You’ll rarely hear a Funk guitarist take a big solo. They complement the rhythm. Funk is all about the groove, keeping it tight and on The One. Great Funk guitarists follow the rhythm, and then find their spaces in which they can shine, dancing on top of the groove. They give funky personality to the all-mighty groove.

So what is this One?

“The One,” in James Brown lore, is the source of that which makes funk funky, and everybody knows by now that James Brown more or less made funk a world unto itself. Specifically it’s the first beat in a measure, but “the one” is not so much a musicological place as it is a spiritual place, as the navigation of that beat is invested with age-old rhythms and nuances that end up propelling the rest of everything else… — according to Mark Reynolds in PopMatters.

This might be obvious for the drummer and bass player, but in Funk, the guitar player is on this act too. In most Rock music, the lead guitarist is less a part of the rhythm section. He jams, and takes solos far more often than a Funk guitar player.

I couldn’t explain it any better than Gibson does here:

Perhaps because funk guitar centers on rhythm and repetition rather than flashy technique, the genre’s greatest practitioners often get short shrift in discussions about six-string giants. With all due respect to the shredders of the world, the players below deserve prime spots in the pantheon of guitar legends.

The enchantment of rhythmic regularity creates a notion of “effective surprise” as the pillar of creativity. Funk guitar lives up to this because it stays so focused on the rhythm and groove, and then steps out with a little surprise solo or an entertaining chord between the spaces.

How To Stay On The One

It requires great discipline to stay on The One for a guitar player (or any musician). But, it gives the music a laser sharp, rhythmic focus. And, like Bootsy says in the video above, you get to do whatever you want in the spaces between. This is where the creativity comes in.

James Brown used to rehearse his musicians like a taskmaster, and fine them money when they missed The One, which is how they got their legendary precision. I heard Bootsy Collins say in an interview that he & his brother, guitarist Phelps “Catfish” Collins, brought that much-needed discipline with them when they joined Funkadelic in the early 1970s.

In my opinion, Phelps “Catfish” Collins might just be the most underrated guitarist ever. Watch him below as he sticks tight to The One, keeping the disciplined rhythm, and then gets called on by James Brown to step out and take his solo for a couple minutes. His solo is full of chicken scratch and super soulful styling, and yet is far more restrained than a Rock guitarist would play. Funk guitarists do more with less.

Potent Performances By The Best Funk Guitarists Ever

A lot of fantastic funkateers have created some remarkable riffs over the years. The Funk guitar greats of the 1970s laid the foundation, and influenced today’s generation of fabulous funky guitar players and bands.

Jimmy Nolen was James Brown’s most prolific guitar player. Many say he was the originator of “chicken scratch,” that which often characterizes Funk guitar playing. “Chicken scratch” focuses on light chops and rapid strumming, while playing near the bridge.

Listen to him shine on this alternate instrumental version of “Give It Up Or Turn It A Loose.” I love the funky honky tonk style here!

Listen to Phelps “Catfish” Collins play fast, furious and scratchy for 9 minutes on “Superbad Parts 1, 2 and 3.” His discipline and rhythmic guitar playing is front and center the whole time. I love his clean, funky strumming on James Brown classics.

Leo Nocentelli is a musical pioneer. As a forefather of funk with The Meters, Leo helped create the syncopated style made famous on tracks like “Cissy Strut.” Leo’s soulful rhythm guitar … helped make The Meters’ music legendary… says Gibson Guitar.

You gotta love that guitar intro and his iconic soulful style — lots of “chicken scratch” and a dedication to the rhythm and The One.

Read this fascinating interview, from Premier Guitar. They have an enlightening discussion about how Parliament/Funkadelic came up with its music, their gear, and other behind-the-scenes clues into their creative process.

Parliament/Funkadelic always was the bridge between Funk & Rock music. Watch this video of a guitar-heavy “Flashlight” in 1979. You’ll hear plenty of typical Funk guitar rhythmic playing, as well as Rock style solos.

Another key element of Funk guitar is the heavy use of the wah-wah pedal to kick the Funk up a notch. Hear Curtis Mayfield go full wah-wah on “Junkie Chase” from the Super Fly Soundtrack.

You probably don’t know his name, but you know his riffs. Skip Pitts was a Stax session guitarist that came up with the famous wah-wah guitar sound for Isaac Hayes’ “Theme From Shaft.” He’s also responsible for the famous chicken scratch riff in The Isley Brothers’ “It’s Your Thing.” Skip Pitts had his hands in a lot of famous Memphis Soul songs too.

Eric Krasno of Soulive and Lettuce just jams! He’s a prolific player, and always out playing live. He excels at Funk, Rock, and Blues guitar with a singular style and boundless energy. Check out his 2016 solo album, “Blood From A Stone.”

Eddie Roberts of The New Mastersounds has a gorgeously soulful & bluesy Funk guitar style and a wonderfully percussive approach to guitar playing. He’s also hard to pin down because his range is so wide and diverse. The New Mastersounds can play fast furious Funk, or beautiful jazzy grooves.

I know for me the music is all about the groove and it’s all sort of dance-oriented, really. Those are the things that resound in me. I think as soon as I heard funk, especially like New Orleans funk, it just took hold of me. It just felt like a very natural way to play as well.—Eddie Roberts

This reinforces what I said before about the Funk guitarist’s role as rhythm keeper, and not show off soloing guy. Watch him and New Mastersounds play a cover of James Brown’s obscure instrumental, “In The Middle.” He goes off in this one, and still keeps his solo tight and rhythmic.

The Funk is as strong as it’s been in 40 years. There are plenty other super-talented, current Funk guitar players out there I haven’t mentioned. New players get inspired by the greats that have gone before, and get motivated to Get Up, Get Into and Get Involved.