The Aural Illusions of the Locrian Mode 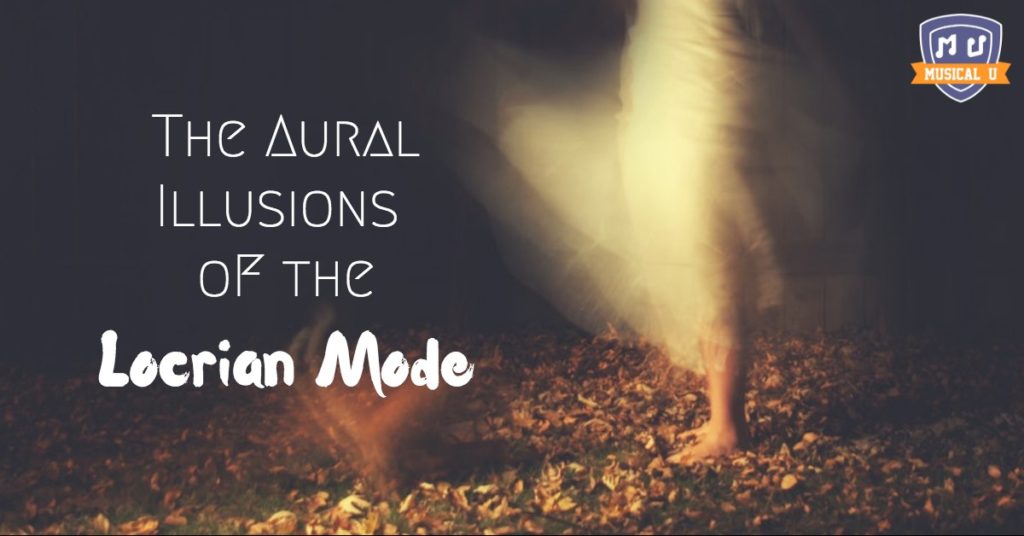 If you have an interest in scales and tonalities, it’s likely that you’ve already had the pleasure of exploring the wonderful world of musical modes – the collection of scales expressing a rainbow of musical emotions.

If you haven’t yet been introduced, refer to our primer on the musical modes for a short lesson on the concept of modes, how they are derived, and where they’re heard.

There’s the cheery and straightforward Ionian mode, the bittersweet Dorian, the heavy metal-esque Phrygian, the floaty and tranquil Lydian, the energetic and rebellious Mixolydian, the melancholic Aeolian mode, and the… off-putting and chilling Locrian mode.

In both music textbooks and practical lessons, those first six modes are explored in detail, with a description of the theory and myriad of uses of each mode, and multiple examples of songs where you can hear the mode.

Not so for Locrian mode – treated as the bogeyman of the musical modes thanks to its strange, unsettling sound, this is by far the most unexplored and underappreciated mode.

But just because something is rarely used doesn’t mean we shouldn’t explore its curiosities and quirks. Quite the opposite – music can get very interesting when you throw some odd elements into the mix. So take a dip into the murky, strange waters of the Locrian mode with us – we guarantee it’ll open up your ears to the beauty that perpetual tension and a sense of foreboding can hold…

First, a bite-sized piece of theory on the Locrian mode.

Each of the seven modes is easily derived by starting on a white key on the piano, and playing your way up using only white keys until you reach your starting note.

Starting on different notes will give you seven radically different-sounding scales. This happens because of the differing intervals that result when you shift the starting note – in other words, each note that follows the tonic will have a different relationship to the tonic, depending on which white key you start on.

If we start on a “B” on the piano and play our way up the white keys to the next “B” on only white keys, it sounds like this:

Locrian scale starting on B

Even with the bare-bones scale, you can probably hear that something is a little off, right?

The scale leaves you hanging, in a sonic sense. It sounds incomplete, unfinished. To get even a semblance of resolution, you’d have to tack one more note onto the end.

In Western music, we really like when things resolve neatly, ending on a stable tonic note and bringing an end to the tension found in a phrase or melody. We want to hear the tune “finding its way back home”, so to speak. Officially, the tonic of the Locrian scale heard above is B. However, the ear has a lot of difficulty hearing B as the tonic, because the Locrian never really resolves.

That final B note is inherently unstable, and no matter in which order you play the notes of the Locrian scale, when you end on that B note, the melody will not sound complete or satisfying or resolved. Instead, it will give off a mood of incompleteness and instability – our ear is so desperate to hear it resolve to that C note right above the B, we almost hear it in our heads!

For this reason, the Locrian mode is sometimes referred to as a “theoretical” mode – one that the ear cannot hear, at least not very easily. It is natural to want to “tonicize” that second note (C) in the scale when starting from B, which simply gives us the C Ionian (or C major) scale – a scale that our ear loves and is very used to hearing.

So what makes this mode so resistant to resolution? How do its inner workings prevent our ear from easily discerning it in music?

Let’s look at the chords that appear in the B Locrian scale:

Look at the tonic chord in particular. Whereas the tonic chords of the Ionian, Dorian, Phrygian, Lydian, Mixolydian, and Aeolian modes are all either major or minor chords, the Locrian mode’s tonic chord is a diminished chord:

This B diminished chord contains the notes B, D, and F. It sounds unfinished, and wants nothing more than to resolve to the C major chord:

To make matters even worse, the Locrian is the only mode that contains no perfect fifth above the root. Looking at the scale again, we see that the fifth degree is flattened, creating a diminished fifth or augmented fourth interval with the tonic. This interval is also known as a tritone because it contains three whole tones:

Now listen to the tonic and this flattened fifth degree together:

Unsettling, don’t you think? At least, that seems to be the popular consensus – so much that this tritone has been nicknamed the “Devil’s Interval”, and was avoided entirely for centuries by composers. And they had good reason – legend had it that simply playing this interval was enough to summon the devil himself.

So where every other mode contains a perfect fifth – one of the most consonant, satisfying intervals in Western music – the Locrian features a dissonant interval that evokes the devil.

This lack of a perfect fifth is another quirk that makes the Locrian sound so odd and even “unmusical”. Found in the popular chord progressions I-IV-V-I and ii-V-I, one of the central tenets of Western music is that special dominant-to-tonic resolution.

Remove that and you’re left with a feeling of the floor dropping out from under your feet.

Spotting the Locrian Mode in the Wild

We’ve established that this mode is all-around unsettling, unresolving, and just plain weird. So why would anyone want to use it? And… does anyone even use it?

Contrary to what music textbooks might lead you to believe, the Locrian mode has a surprising number of uses and can be heard in genres ranging from jazz to pop to rock. It’s somewhat rare that a whole song is written in Locrian mode, but its “spook” factor lends itself well to transient passages, solos, and basslines.

Let’s look at our first example, from the Queen of Avant-Garde herself…

Who else would take this strange, inaccessible mode and turn it into a brilliant industrial rock tune but Björk?

Though not nearly as buoyant and pop-derived as much of her other work, “Army of Me” still manages to be catchy and intriguing – all while having its bassline and melody written in Locrian mode.

Listen to the whole song, paying particular attention to where Björk sings “army of me”, signaling the end of the chorus at around [1:07].

This end of chorus-beginning of verse transition is the place where most songs resolve to the tonic, bringing a sense of “going back home” including this one. However, notice how the song resists the feeling of resolution, sounding like there are still notes to be played and sang – the trademark restlessness of the Locrian mode.

Despite sounding “unsatisfying” in some ways, most people can agree that this track is a wonderfully dark and moody pop-adjacent masterpiece – the instrumentation, catchy drums (sampled partially from Led Zeppelin’s “When the Levee Breaks”!), and beautiful vocals are the perfect foil for the oddness of the Locrian mode. That’s the magic of Björk.

If you’re a classical music buff, there’s a good chance you’re familiar with the prelude and fugue combination. These two types of compositions are like a musical peanut-butter-and-jelly – the loosely-structured, somewhat improvisational prelude is the perfect introduction (and foil) for the complex, layered, and idiosyncratically structured fugue.

The prelude-and-fugue structure was a favourite of big names such as Bach, Liszt, Shostakovich, Kabalevsky, and Mendelssohn, and has been used in countless compositions from the 1700s to the modern day.

So you have to wonder, what happens if you combine this classical structure with the mode that is least frequently seen in classical music?

His “Fantasy No.7 in Locrian Mode” ends up being an intriguing fusion of the familiar and the odd, the comfortable and the unsettling. The structure, phrasing, cadences, and overall feel of the piece remind us of the classical pieces we know and love – and yet the modality of the music makes it sound restless, strange, and at times even scary.

Though the Locrian does tend towards the unsettling and macabre, it’s also capable of producing some truly beautiful melodies.

It’s still very much Locrian (listen for that total lack of resolution at the end of the song!), but rather than sounding chilling, it gives off a pensive mood, the feeling of a story being told.

After hearing a few songs that use the mode, you kind of start to recognize the sound, right?

Let’s recap a little. The song you’re listening to is likely in the Locrian mode if:

Once you’ve gotten a feel for the sound, you’ll want to dabble in creating music with this underrated mode. And because of the nature of the Locrian, the music you’ll make will end up sounding (at the very least) unusual and interesting.

Get started by playing through the Locrian scale, building chords above each note, and stringing them together to produce your own unsettling progression. Or, sneak a Locrian passage into a song with an otherwise straightforward major or minor key. If you feel really daring, take the ultimate challenge and write a whole song in Locrian – bonus points if you, like Björk, manage to make it a pop song!

Use your ear training to really internalize the sound of the Locrian mode before trying to play in it – take note of how the scale degrees interact with each other to form the Locrian’s trademark mood, and try to train your ears to recognize the distinctive intervals found in it.