Home » News » Syncopation and Chord Tones, Hook Theory, Songwriting with the Strawbs, and The Catchy Part

Syncopation and Chord Tones, Hook Theory, Songwriting with the Strawbs, and The Catchy Part 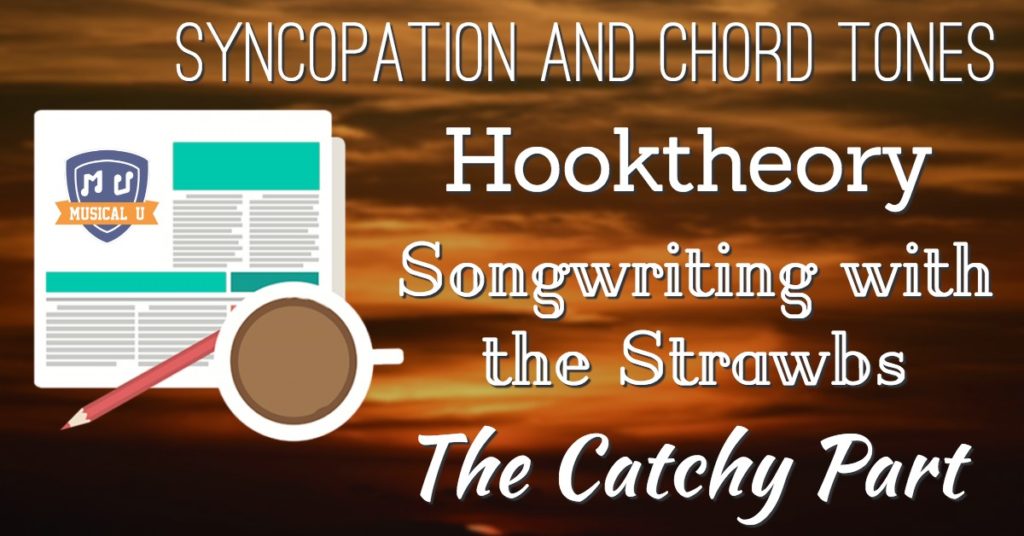 Playing music is a joy in itself. Any musician will tell you that there’s no feeling quite like producing sounds with nothing more than your voice or the movement of your fingers.

However, there is a new dimension of satisfaction that is brought about by playing your own music.

This week, we’re giving you songwriters (and aspiring songwriters!) some inspiration. With the arrival of two new resource packs that explore syncopation and chord tone improvisation, Musical U members can explore how to add rhythmic and melodic interest to their compositions.

Additionally, Dave Cousins of famed rock group the Strawbs drops in for an insightful interview on the state of the music industry, and the art of writing unforgettable music and lyrics. Two of the founders of the phenomenal music education tool Hooktheory share their insights on applying music theory concepts to songwriting. Finally, The Musicality Podcast looks at “the hook” of the song, why it matters, and how famous musicians have used it to great effect.

The newest additions to our instrument packs are here to help you go beyond basic rhythms and scale improvisation.

Syncopation is everywhere in most every musical genre. Our new syncopation resource pack is a must-have for anyone who wants to play off and around the beat. Our four resident pros show you how to add rhythmic interest to your piano, guitar, bass playing with this colourful and versatile rhythmic tool. 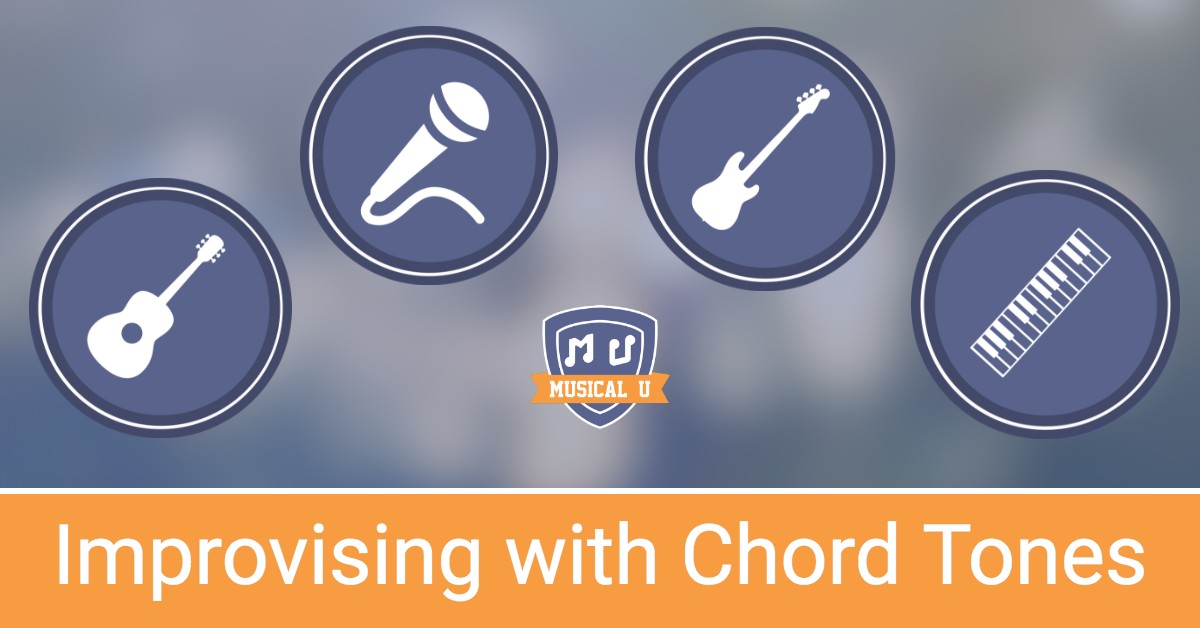 The improvising with chord tones resource pack is the perfect way to take your improvisation beyond the constraints of scales. With instrument-specific tips that incorporate solfege, arpeggiation, and chord knowledge you likely already have, our resident pros will introduce you to a whole new way of soloing! 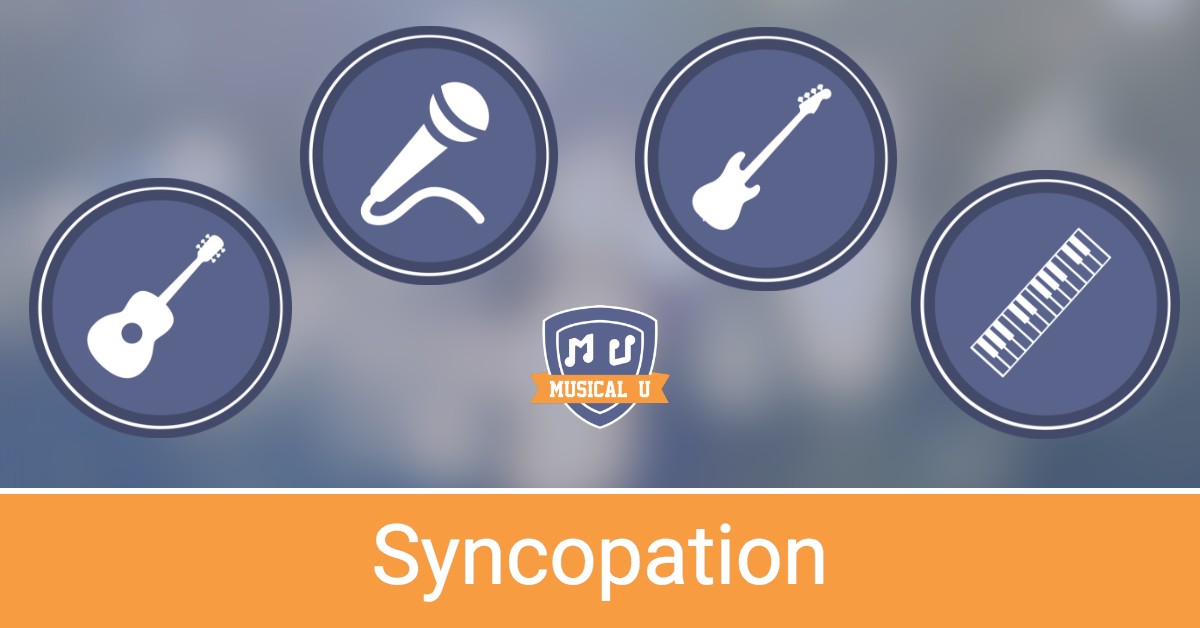 Syncopation and playing off the beat can add a great deal of variety to your rhythmic figures. This is the perfect way to engage the listener. Tyler at Music is Win shows how the same basic chord progression can be transformed with syncopation.

While Tyler explores syncopation through rock music, it is important to note that many of these rhythmic figures we associate with popular music originated in jazz. Syncopation is a fundamental element of jazz music, and helps to make this music so irresistible! The New York Jazz Workshop explores what makes jazz jazz.

Can syncopation help you succeed in business? Alain Sylvain, a highly successful entrepreneur, outlined four secrets that entrepreneurs can learn from studying jazz music that will yield success in the business world.

There’s nothing out there quite like Hooktheory. The online tool provides a new, intuitive way of looking at music theory, and helps you understand melody and harmony in the songs you know and love.

This week, Musical U interviewed Hooktheory’s founders about their incredible learning tool. In Multi-coloured Music, with the Hooktheory team, the founders share their own musical backgrounds, how their love of music led to the development of Hooktheory, and what sets it apart from other systems for learning music theory, melody, and harmony. 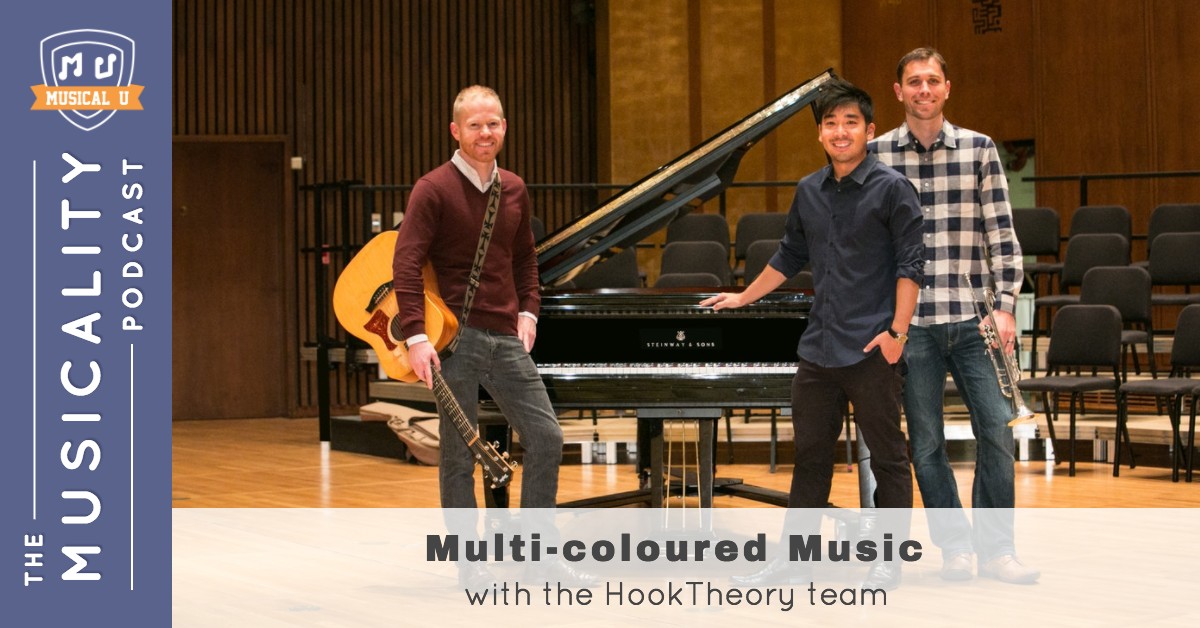 If you’re already familiar with Hooktheory, this will serve as a great behind-the-scenes peek. If you haven’t experienced this tool for yourself, what better way to get acquainted?

A fun exercise in your musicality is to experiment with turning a major song into minor. This shows just how important tonality is to the overall feel of a song. You may even be surprised to hear how the meaning of a song is completely transformed. Fortunately, the team at HookTheory has built a tool that makes transposition a breeze!

Dave and Chris shared their musical journey and how they largely began playing by ear, without understanding music theory. It was only later that they began to learn the theory behind what their ears told them sounded good. Many musicians learn this way, and some methods even advocate this ear-first learning style. Eric from Your Guitar Sage shows how you can learn the guitar fretboard by ear.

Your first taste of music theory can be overwhelming. There is so much to learn, and it requires you to focus on the essential elements of music theory. Guitar Theory Revolution teaches you some easy ways to dive into this initially intimidating task.

Dave and Chris explained how you can easily transpose any of your favorite songs by using the Nashville numbering system (example 1-4-5) on a chord progression. Using chord numbers allows you to associate a chord with its relationship to the tonic rather than with a chord name. Ken Reynolds explains this concept further in a lesson on transposing any song in mere minutes.

Songwriting with the Strawbs

With a massive discography spanning numerous genres and decades of success under their belt, the Strawbs have proven that they’re here to stay.

From their early beginnings as a bluegrass band to their transition to progressive rock, founding member and principal songwriter Dave Cousins been the major driving force behind the band’s success, with his organic approach to songwriting and unforgettable guitar playing. 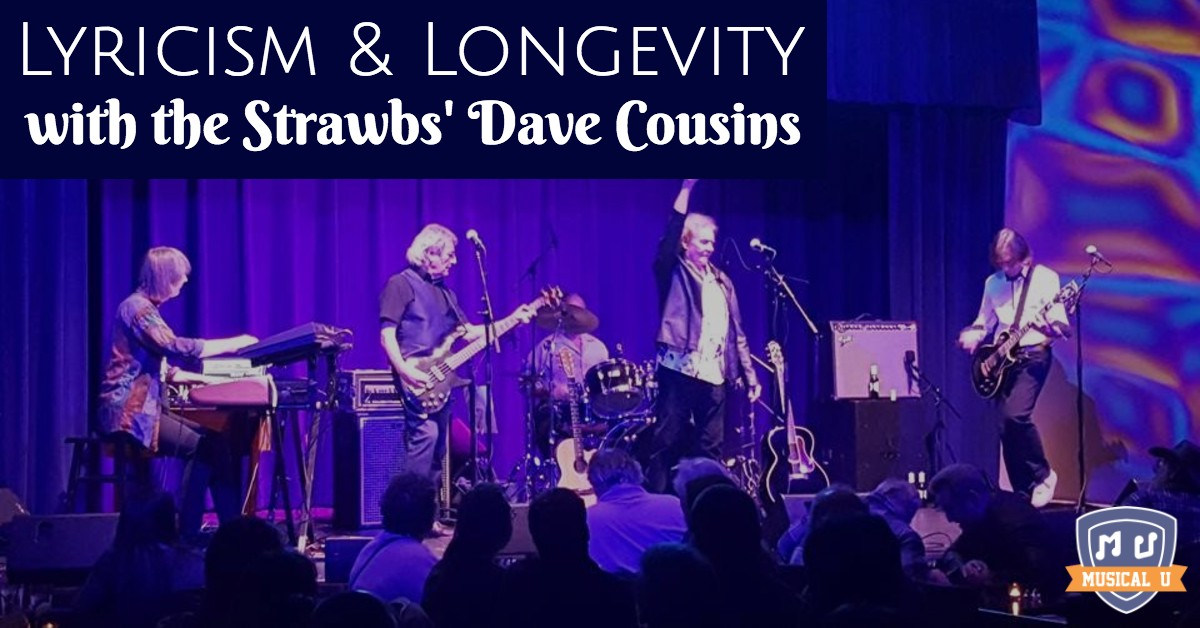 Musical U’s own Stewart Hilton sat down with Dave to discuss the Strawbs’ incredible longevity, how music has changed over the years in his eyes, and of course, Dave’s inimitable approach to writing music and lyrics. Head over to Lyricism and Longevity, with the Strawbs’ Dave Cousins to get a true music veteran’s take on musicality.

It was really fascinating to hear how Dave was experimenting with alternate guitar tunings very early in his musical journey. This has allowed him to create a unique sound and be very creative in his songwriting. If you are stuck in the standard tuning, My Rare Guitars has outlined five alternate guitar tunings and popular examples of where these tunings have been used.

Dave talked about how music is often just “pieced together” on the computer instead of being written as one musical thought. Songwriting can be a difficult process, with unexpected roadblocks along the way. Isa Burke explores the songwriting process and her frustrations with it. Don’t miss it – it’s a relatable and helpful read for any songwriter.

While most of us don’t start out as songwriters, many can already write. Can you take the skills you learned in creative writing and apply them to songwriting? Hope Clark shares five simple steps you can take to stretch your songwriting muscles.

Dave talked about how technology and the ways in which people consume music have changed the Strawbs’ approach to marketing. Currently, one of the most popular sites for distributing music is YouTube. If you want some great tips and tactics to up your YouTube game, Music Consultant interviewed an up-and-coming musician on how he built a following through this platform.

The “hook” of a song is what ensnares the listener’s ear and gets stuck in their head.

Think of the bassline from “Under Pressure” or that synthesizer melody from A-ha’s hit “Take on Me”. Simply put, the hook is what makes a catchy song catchy. 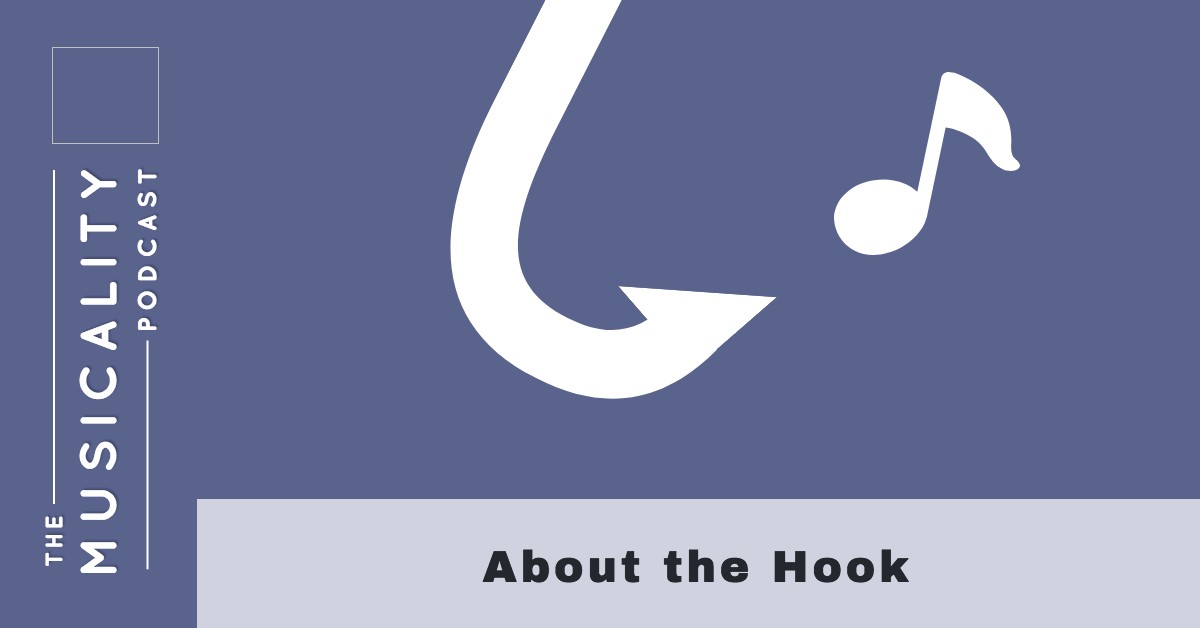 In the Musicality Podcast’s episode About the Hook, we look at what makes a good hook, how it differs from the chorus, and the variety of ways in which famous musicians have used “the hook” to turn their songs into absolute earworms.

As John Popper from Blues Traveler sang, “The hook brings you back”! Writing great melodies and hooks is one of the most important aspects of being a great songwriter. Song Talk Radio interviewed singer-songwriter Jeffery Straker on his fantastic songwriting tips.

We all know that writing melodies is important, but how do you go about doing it? Alex Rome showcases five tips for writing perfect melodies. After Alex’s lesson, try experimenting with your own melodies to implement his helpful suggestions.

Melody is important in all popular genres of music. When he was asked about current mainstream music, the great Merle Haggard recently commented that “Nobody even attempts to write a melody.” Megan from Country Exclusive explores the current state of popular music, and how melody seems to be lost art.

The Joys of Songwriting

With tools such as Hook Theory, Musical U’s own resource packs, and more to make songwriting so easy to dive into, there’s nothing stopping you from taking a whack at crafting your own tunes.

Take advice from Dave Cousins and go back to basics by turning off the computer and spending some time with your instrument. Think of a catchy hook and build a song around it. More importantly, remember to enjoy the incredibly fulfilling process that is writing your own music!

No matter what your songwriting style is, a solid foundation in ear training and music theory are your best friends for writing an unforgettable piece of music. Join the Musical U community today to begin honing these skills!