Home » Podcast » About the Hook 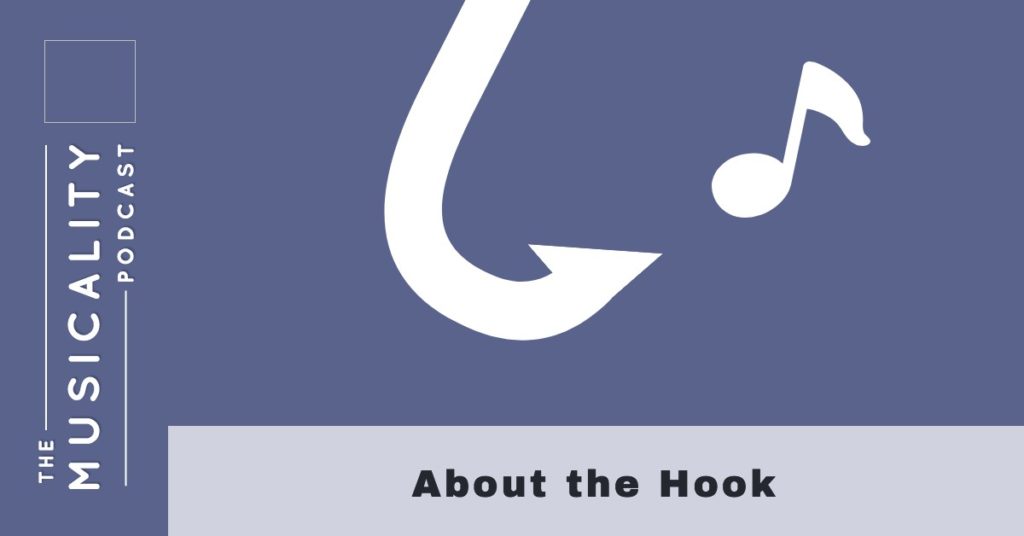 We all know the “hook”, if not by name. It’s the catchiest, most memorable part of a song, and the culprit for getting the tune stuck in your head. In this podcast episode, learn what makes a hook, what differentiates it from the chorus, and how some famous artists have used it to elevate their songs from great to unforgettable.

In our last episode I was talking with the guys from HookTheory, a very cool website that helps you understand how the chords and melody in music work.

One thing we didn’t discuss but which you might have been wondering about was “Why is it called HookTheory?” – now I haven’t asked them this so I hope I’m not going to totally mislead everyone! But to me it seems clear that it’s because it’s a site that helps you understand the theory of song hooks (among other things). And also because the method itself acts as a kind of hook for learning.

One important part of musicality is being familiar with the jargon that musicians use, so that you can understand what’s said and communicate yourself.

“Hook” can be a confusing word. It belongs to the world of rock, pop and hip-hop more than classical music but there are corresponding concepts in classical. Most notably the “motif” which means a repeated pattern, normally a melody line. And we could say that the hook is just the most prominent and memorable motif in a song.

So when Vanilla Ice raps “Check out the hook while my DJ revolves it”, it kicks into the catchy hook chorus “Ice, Ice, Baby”.

Where it gets confusing is that the hook is often the same as the chorus of a song – but not always!

In our recent episode on 1-4-5-6 chord progressions I quoted Blues Traveler lyrics and I’m going to do it again – because I like the way they put it, in their very meta song-about-songs called, fittingly enough, Hook. John Popper sings “The hook brings you back – on that you can rely”.

And that’s probably a good definition. The “hook” is the part of a song that sticks in your head after the song is over. Probably the part you think of first if someone mentions the song. It’s normally what makes a catchy song catchy.
And so at this point I have to add a warning. I’m going to give a bunch of examples of song hooks – and by definition these are likely to get stuck in your head! So I apologise in advance for that…

As well as from getting clear on what the term “hook” means, I also hope this episode will open up your ears, so that in future whenever you hear a song you’ll pause to ask yourself what’s the hook (or if there is even a notable hook).
So there are a few types of hook to talk about. Some song writing instructors break it down quite precisely by whether it’s the lyrics, or delivery, or arrangement, or production that make the hook hook-y. But I just wanted to do a simple split in terms of how the hook fits into the song.

The first possibility is the most common: the song’s chorus is its hook.

If someone asks you to sing part of a song, the chances are you’ll launch into the chorus rather than the intro or a verse. Most catchy songs have a catchy chorus.

This started back in the early days of pop with Beatles songs like “Help!” where that shouted “Help!” at the start of the “Help! I need somebody” chorus acted as a prominent hook. They were masters of creating varied hooks and even as their songs became less pop and more sophisticated they’d have powerful chorus hooks. Think of “Here comes the sun, Doo dun doo doo” or “Bang, bang, Maxwell’s silver hammer came down upon her head”.

And it continues now – think of Carly Rae Jepsen “Hey, I just met you – and this is craaazy”, Rebecca Black singing “Friiiday, Friiiday, Gotta get down on Friiiday” or Justin Bieber singing “Baby, baby, baby”.

So having a catchy chorus is the tried-and-true way to give a song a hook.

But it’s not the only way.

Often songs will have a catchy vocal part which isn’t the chorus.

Coming back to the Beatles, “Hey Jude” is one of their biggest hits – and although the first verse is memorable, starting with the title of the song, the most catchy part comes at the end with the classic “Naaa nah nah na-na-na-nah, na-na-na-nah, Hey Jude”.

So apart from the chorus or another non-chorus vocal part, where can we find the hook of a song? Well, sometimes it’s actually an instrumental part that’s the hook.

This is where I get to pretend I’m on the TV show “Never mind the Buzzcocks” doing the intros round. Wish me luck.
I’m going to sing the instrumental hook and you try to identify the song. We’ll have answers in the shownotes.

Well, could you recognise the song? To me, those riffs are what make those songs as memorable as they are and although other parts of the song might be catchy, it’s those riffs that are the most prominent motif and hence the hook.
As is so often the case in music, a lot of this is debatable. And it’s not impossible for a song to have more than one hook, or have something really notable and memorable which isn’t easily categorised, such as Cher using a vocoder to transform her voice on “Believe”, or the first big dubstep hits being memorable just because their beat was so unusual.

So next time you find yourself annoyed that a song’s stuck in your head, or you hear a new song for the first time, stop and ask yourself: what’s the hook?

Of course the next question is: why is the hook so catchy!? We’ll save that one for a future episode.

Now if you’ll excuse me – I need to go sing each one of those songs on loop for the rest of the day.