Home » News » Starting to Sing: Learn to sing even if you have a bad voice or can’t sing in tune

Starting to Sing: Learn to sing even if you have a bad voice or can’t sing in tune 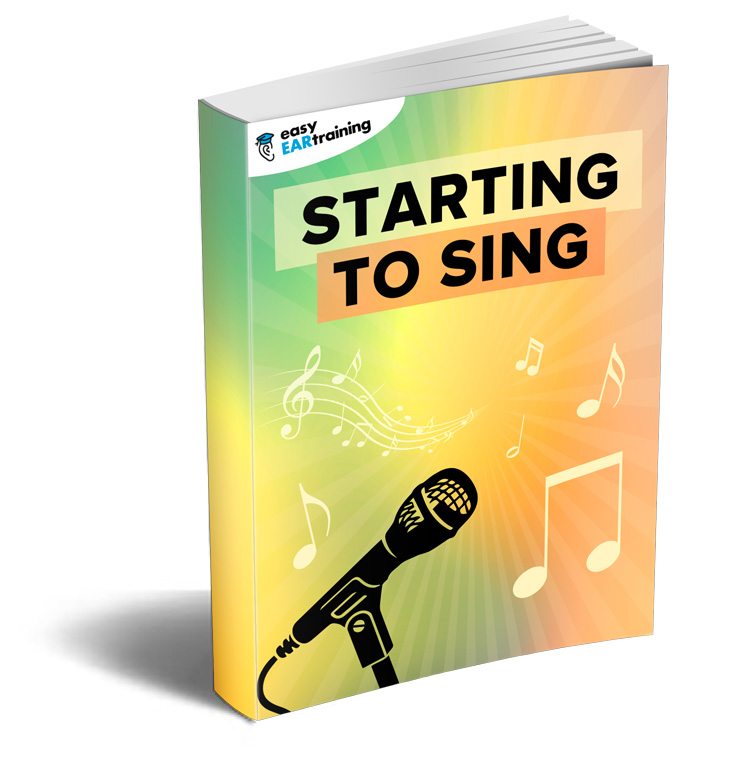 Have you ever been told you can’t sing? Or worried that you’re just naturally a bad singer?

Today we’re excited to release a new audio-enhanced eBook called Starting to Sing which helps you go from “I can’t sing!” to singing easily, accurately and confidently.

Over the last year over 100,000 people have passed our Tone Deaf Test and through talking to hundreds of them we learned two remarkable things:

Let’s look at these two in more detail. At first, this seems like a shocking number. We’ve all encountered too many people in our lives who can’t seem to hold a tune, whose singing voice grates on the ear, and who blast out wrong notes apparently clueless to the unmusical sound they’re making. You might even be one of these people yourself – and you’re certainly not alone!

So how is it possible that just 3% of people are truly incapable of singing?

The answer is that society tends to abandon those who can’t immediately and naturally sing in tune. Countless school teachers and parents have heard a child singing out of tune and steered them (sometimes not so gently) away from learning music.

The result: A huge number of people who can learn to sing but think they can’t.

… which brings us to the second discovery:

2. It’s surprisingly hard to get started

Again, this may sound highly unlikely. You only need to look in a music shop or search the internet to find plenty of “beginners singing” resources. Books, courses, video tutorials… Plenty of ways to learn to sing, it would seem.

But there’s actually a huge gap, and it’s covered up by the word “beginner”.

Because when it comes to learning to sing, “beginner” doesn’t really mean “someone who is beginning” – it means “early-stage singer”.

These resources can be excellent – if you can already sing pretty well. If you can’t yet sing in tune, if your voice feels out of control, if you feel your voice just sounds bad and you don’t know what to do about it: these resources are of no use at all.

You find yourself in what we’ve taken to calling the “Pre-beginner Trap”.

This is why last year we spent months developing a brand new interactive singing tutor, SingTrue. It’s the only app which is specifically designed for people at this “true beginner” stage, where the voice is unfamiliar and untrusted, and the very basics like pitching a note correctly present a real challenge. SingTrue leads you through learning to control your vocal pitch and get comfortable and confident with the fundamentals of singing.

So far SingTrue has helped tens of thousands of people learn to sing in tune and we’re looking forward to continuing to develop and improve the app.

The 5 barriers to becoming a singer

In fact, as we talked to people who wished to be good singers but felt daunted by the whole idea of learning to sing we learned there are actually 5 major barriers to becoming a singer – and singing in tune is only one of them.

This is the most common barrier of the five: Having difficulty singing “in tune”.

“Singing in tune” means actually singing the notes you mean to sing.

“I’m very rarely in tune and almost always off key.”

Many people lack the confidence to sing, particularly in front of other people. Some are happy to sing in private – but terrified to be heard. Others are too sure that they’re a bad singer that they won’t even try in private.

“I’m shy to sing in front of people.”

If you’re nervous to sing when people are listening, this barrier is holding you back:

Barrier #3: Having a Bad Voice

Many people never get started with singing because they have a “bad voice”. What exactly does that mean?

It varies from person to person. Often it’s closely related to Barrier #1 (Pitch and Tuning), but there are many other things which make people think their voice is just no good.

In fact there are 16 different things which determine whether a voice sounds good or not!

Unfortunately the world can be a cruel place at times, and even the people who should be supportive and encouraging – family, friends, even teachers – sometimes instead offer harsh criticism which discourages people from singing in future.

Criticism can make you not want to even try learning to sing.

“I was told I couldn’t sing at a very early age. Ever since, I’ve had no confidence.”

If your singing voice has been criticised and it’s left you reluctant or scared to sing, this is the barrier preventing you from learning to sing.

“I like singing – but my voice is all over the place.”

Not being able to control your voice is often a big part of all the other barriers mentioned above.

Good vocal control is essential to sounding good as a singer. If you find it hard to switch notes properly or feel that your voice is “all over the place”, then you are facing this barrier.

So if you’re facing one or more of these barriers and stuck in the “Pre-beginner trap”, what can you do?

In the past, we didn’t really have a good answer to that question – and that was painful because we felt your frustration at being held back from your dream of learning to sing.

So we’ve spent the last few months working on a solution. Something which can help you break each of these barriers and become a capable, confident singer. Starting to Sing is an audio-enhanced eBook which is different from all the “beginners singing” material out there. It doesn’t assume you can already sing in tune or have control over your voice. Instead it starts from the absolute basics and leads you step-by-step to learning to control your voice and sing accurately and reliably.

In over 100 pages and with dozens of audio examples, Starting to Sing shows you how to break each of the 5 barriers and quickly become a capable and confident singer.

“I would very much like to be able to sing but considered myself to have a poor singing voice.

Starting to Sing is for beginner singers who are looking for a fairly comprehensive look at all the aspects of developing a pleasant singing voice.

I found the material was explained exceedingly well, and I liked the clear organization, the encouraging tone and all the explanations, sound clips and exercises.“

We’re really excited to add this new title to our range of eBooks and be able to provide a full solution for learning to sing which is usable and useful to anybody who passes the Tone Deaf Test. We know that among EasyEarTraining.com readers there are thousands of people who want to learn to sing, ranging from people who’ve always feared they were “unmusical” through to some quite accomplished instrumentalists who still have difficulty with singing.

Now we have finally have a good answer when people come to us and say “I really can’t sing! Is it possible for me to learn? How?”

If you’ve ever doubted your own voice yet wished you could sing easily, and sound great: Starting to Sing is for you. I hope it will help transform you into the singer you dream of being.