Imagine you have just discovered a new kind of music. You love what you’ve heard and want to hear more, but you don’t know what the genre is called to be able to search for it. Don’t worry – there is solution for this. With the tips in this article and a bit of ear training practice you will soon be able to identify music genres yourself.

First of all we should make clear that there is no one unique way that will guarantee to identify a genre. The idea of a music “genre” is complex, depending on many aspects, so the challenge of identifying them can be a complex one too. It’s even harder nowadays because there are lots of mixed genres and sub-genres derived from popular well-known genres.

We’re going to look at some tips for using the tempo and rhythm of a track to identify its genre. For more tips on specific genres, be sure to check out the Open Your Ears series. 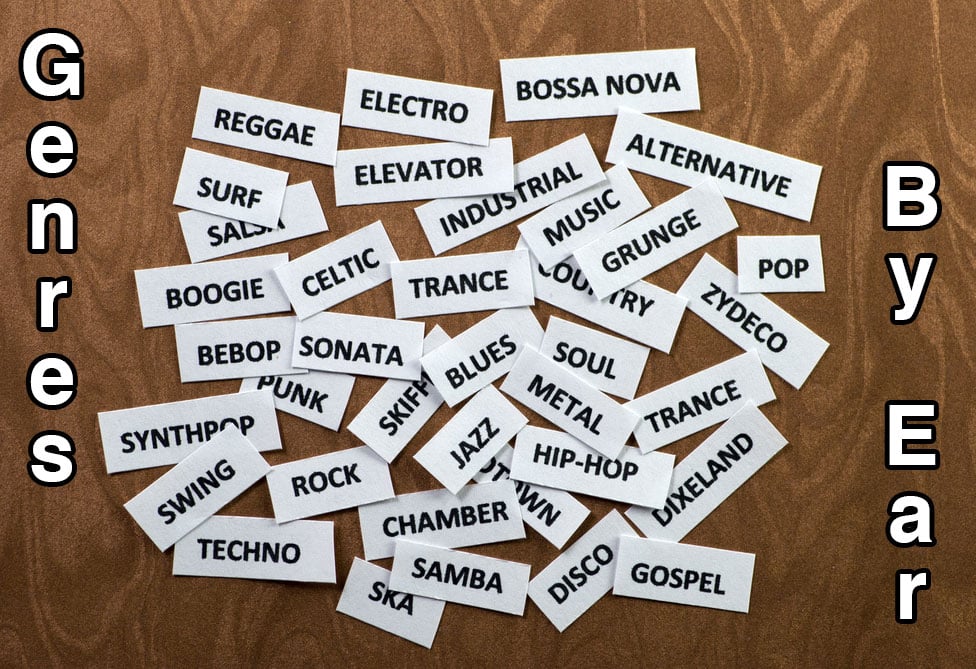 What are the typical tempos of musical genres?

One of the most important features of music is the tempo it’s played at. Nowadays that is usually expressed in BPM, meaning the total number of Beats Per Minute. To identify music genres by this feature, first you have to know what the typical BPMs of most popular genres are.

Some of popular non-electronic genres and their approximate tempo ranges include:

Electronic genres and their tempo ranges include:

Finally, some different social/partner dances and their typical tempo ranges:

Of course, like everything in music, the “rules” are made to be broken! That means it’s possible to find a song from one genre which doesn’t fit the ranges listed above. You normally need to listen for multiple features to identify a genre with confidence. Still, having a sense of which tempos fit which genres is a reliable starting point.

How to measure the tempo?

Now you know the basic tempos of some of most popular genres, you are probably wondering how you can identify the tempos yourself. 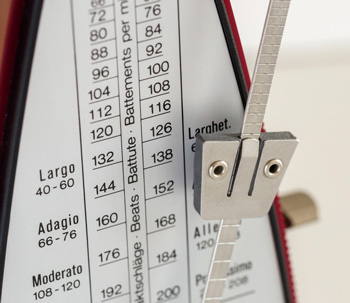 When it comes to manual tempo measuring, the metronome is the most common device used. A metronome basically counts at a set number of beats per minute which gives you a handy and reliable reference tempo to compare with.

To do this just play the track, enable the metronome and set it to the tempo of the track. Try to synchronise its beat with the beat of the track. Pay attention to the percussion (drums), as it is normally the easiest way to count along the beat. The elements which are usually on beat are kick drums and snare. Here are some tips on identifying the different parts of a drum kit by ear.

When counting in four, the kick will normally be on the uneven beats, while snare will be usually placed on even numbers. This might help you to count along the track and set up the proper tempo of metronome. Here are two audio examples to train your ear, with the metronome ticking along in time with the music:

If you use a Digital Audio Workstation (DAW), you don’t need a metronome device because it’s already built into the software. It allows you as the composer to tap along with the beat for a couple of bars of the song and the system will then automatically detect the tempo. This is particularly useful if you’re starting from a sample or a drum track and don’t know its genre or BPM.

As you will have noticed in the previous section, some genres have similar tempo ranges. In this situation, differences in drum patterns are the main technique to recognize the genre. Let’s analyze few examples and their typical drum patterns.

To recognize a basic hip-hop beat, the kick is usually on 1st, 9th and 11th sections of four bars divided into 16 parts. The snare line is as simple as it comes: a hit on the 5th and 13th beat. The hats tie this beat together. Those are usually used in straight 8ths to reinforce the kicks and snares, adding definition to both.

For post-disco and pop songs the most basic beat is played with eighth notes on the hi-hat and the snare drum on 2 and 4.  Quarter notes are played on the bass drum if you want a driving beat or played on 1 and 3 for a more laid-back feel.

Songs like “Billie Jean” by Michael Jackson and “Another Brick In the Wall” by Pink Floyd all have this as their basic drum beat. Listen to the beat of this ultimate classic yourself:

Dubstep is easily identified by the special half-time feel it creates. While the placement of kick and hi-hats may vary, the most important element for recognition is the snare drum, which will be always placed on the third beat, creating the distinctive half-time dubstep feel.

Here is example of how it sounds in use, try to hear it:

There are some genres that are easily identified by other common features. This means you don’t have to measure the tempo or recognize the drum pattern.

The best way to get really good at genre identifying is to expand your listening experience. Choose a track, Google what genre it’s from, listen to it and make notes about what’s distinctive. Repeat this step as much as you can, most preferably across different genres.

Need a hand getting started? Try the Open Your Ears or Listen Close series here on EasyEarTraining.com.

In this way you will gather knowledge of a wide variety of genres. Later you will be able to identify the genres based on first bars you hear. The more you listen, the more easily it will come!