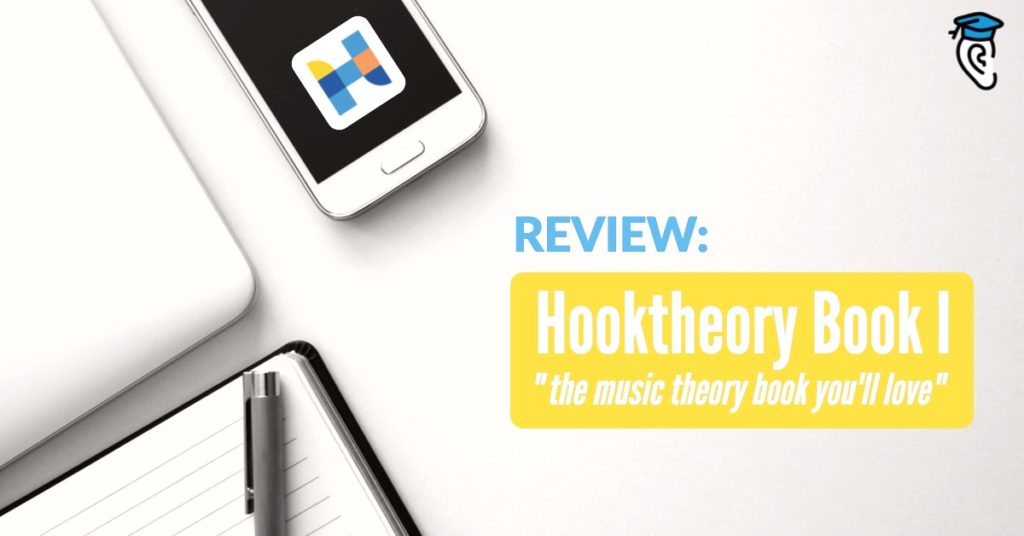 As musicians we crave having an instinctive understanding of the music we hear and love. Yet the traditional solution, music theory, leaves most musicians confused and frustrated.

At Easy Ear Training we’re particularly keen on those who combine music theory with listening skills, helping musicians to really connect up the abstract concepts with the music they hear and play every day.

Hooktheory is at the forefront of innovative music theory teaching. We wrote about the hooktheory.com site back in 2013, interviewing team member David Carlton about their approach.

Since then Hooktheory has gone from strength to strength, now boasting over 8,000 interactive song transcriptions, and offering Hookpad, an interactive song-writing toolkit.

They recently released the second volume of their multimedia music theory guide, Hooktheory Book II and we decided it was high time we went in depth with the original, Hooktheory Book I, and shared with you a review so that you can judge whether this is the solution to learning music theory that you’ve always been looking for… 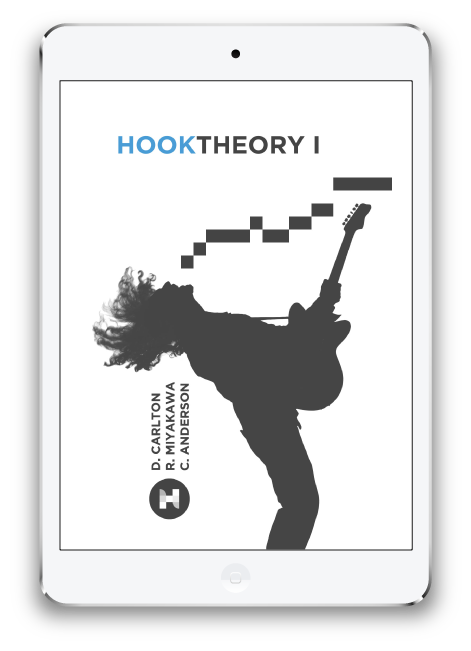 Described as “the music theory book you’ll love”, Hooktheory Book I is available online through hooktheory.com, or as a downloadable mobile app for iOS and Android.

It’s designed to take someone from zero knowledge of music theory or traditional score notation through to quite a comprehensive understanding of how melodies and chords work. In truth I was surprised by just how much material they’ve included – but due to the effective way the concepts are explained, I can believe the claims that on average it takes just 5 hours for someone to read through.

The book begins with an explanation of how the major scale is the fundamental building block for music. An elegant video demonstrates how a medley of diverse songs, from Disney to pop to punk, can be played with just the white keys of a piano (i.e. with the major scale).

From there it moves on to an explanation of “relative notation”, meaning using scale degree numbers instead of letter names. This is similar to the solfa system of relative pitch which we teach at Musical U, where you learn to understand and recognise the role of each note in the scale.

Hooktheory also introduces color-coding of the scale degrees (so that the tonic is always red, and the dominant blue, for example) and a piano-roll style grid notation where you can more easily see sequences of notes over time. Although these notations are not the traditional ones from music theory, they are explained simply and effectively with the descriptions and video demonstrations of musical examples.

This innovative notation will be familiar to anybody who’s used the hooktheory.com website and means that even someone with no musical background could follow along and intuitively understand how the visual representation of melodies relates to the notes they hear.

The book moves on to explain chords, and how you can think in terms of their function, similar to the relative notation just introduced for individual notes. Different chord qualities such as major and minor are explained, relating back to the scales already covered.

Chapter Two teaches you how to listen for chord functions, specifically the I, IV and V chords, with plenty of examples from late 20th century pop music, as well as a few from the classical world. There are some good tips for song writers and composers to be creative using the theory they’ve been learning.

Chapter Three focuses on melody, covering how melody notes relate to the underlying chords, which notes are “stable” and “unstable” over each chord function, and how rhythm and repetition are used in composing catchy and effective melodies. Chapter Four introduces the ii and iii chords and looks at some popular ways to use them in progressions. Finally, Chapter Five continues on to discussing chord inversions and a few common chord voicings and how they’re used in progressions.

Pros and Cons of Hooktheory Book I

Overall, I have to give Hooktheory Book I two enthusiastic thumbs up. It covers all the essential music theory for understanding how songs are put together – in a fraction of the time (and with a fraction as much confusion) of traditional music theory courses.

Let’s look in a bit more detail at the pros and cons of this music theory book:

As is probably clear from the lists above, the pros far outweigh the cons, and I would highly recommend Hooktheory Book I to any musician. Whether you’re just starting out, you’ve tried learning theory before and been frustrated, or you think you know music theory but would like a better sense of how it all relates to modern music, this book is for you.

There are two things which make Hooktheory Book I remarkable:

Hooktheory Book I is something I wish I’d had back when trying to pass music theory exams. Although there are a few areas where it could be improved, it is already vastly superior to and more relevant than all the standard theory textbooks. I would say it is essential reading for any musician who wants to grasp music theory in an intuitive way, understand how songs are put together, and start recognising notes and chords by ear. Highly recommended!